With the Border and West Country regions already switched and Granada up next (the Winter Hill switchover starts November 4th), the process of digital switchover is well underway. But there are still many people who have analogue TVs and recorders and don’t have the money to replace them, so the most affordable solution is to buy a Freeview receiver and hook it up to their existing kit.


UK-based manufacturer TVonics has a wide range of Freeview receivers for this purpose, the latest of which is the MDR-240. This model not only delivers free digital TV but it’s also one of the first to meet the Government’s ‘Core Receiver Requirements’ that ensures equipment is suitable for ‘vulnerable’ users, such as the elderly or people with disabilities (the full list of these requirements are found here.

Sadly, these requirements don’t say anything about how the receiver should look, otherwise TVonics might have made more of an effort. The MDR-240 is a rather dull-looking black box, with a plasticky finish and no eye-catching embellishments to speak of (apart from a green/red power LED). We know it’s designed to be a functional Freeview receiver and not a work of art, but a little more pizzazz wouldn’t have gone amiss – after all, TVonics has launched some pretty good looking products in the past.


On the plus side, it’s amazingly compact (196 x 89 x 31mm) which means it can be easily tucked under your TV without the need for a major reshuffle.

On the back is a basic range of connections, which makes this better suited to simple systems. There are two SCART outputs, one of which outputs RGB, S-video or composite to one device (most likely your TV) and another that only outputs composite. This second SCART is intended for connection to a recorder, but as most DVD and hard-disk recorders support RGB input, the picture quality of your recordings might end up looking quite poor if you use this output. The Core Receiver Requirements list RGB from the second SCART as optional, but TVonics decided against it. Shame.


TVonics also keeps it simple by leaving out an HDMI output, which eliminates upscaling and resolution issues that the unit’s target audience may not understand. There’s also no digital audio output, probably for similar reasons, but you do get a 3.5mm analogue stereo output. Completing the socket line-up is an aerial input and loopthrough socket, but UHF modulation of digital signals is only optional in the requirements and once again TVonics chose not to include it.

When you power up the box for the first time, its innate user-friendliness is apparent from the start. The first screen prompts you to start a full channel search, and our box found 61 TV channels, 23 radio stations and nine data channels in about a minute. Helpfully, the unit retunes itself every night to ensure that you always have the most recent channels, and does the same after every system upgrade, which means you won’t lose channels during the switchover process.


Overall, the MDR-240 is incredibly easy to use. The main menu is a neat semi-transparent box superimposed over live TV, with the current option highlighted in green. The text is easy to read and the options are sorted into logical groups that make it easy to find the right setting. Among the adjustable options in the ‘Settings’ section are aspect ratio modes (widescreen and 4:3 normal/letterbox) and a choice of SCART output options.


The Edit Channel List menu lets you swap channels into your preferred order, as well as hide channels you don’t watch, while the Timer menu lets you programme the box to switch to a certain channel at a given time (to record it on an external machine, for example). You can set up to nine events and a dialogue box lets you know when the channel is about to change. 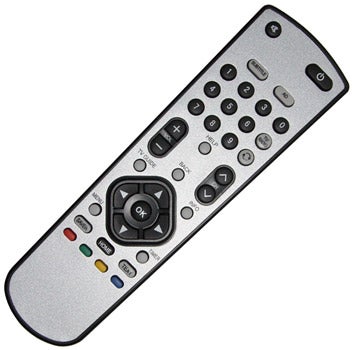 The user-friendly flavour continues with the eight-day EPG, which boasts a stripped-down design that’s easy to digest. It populates instantly and works like most other Freeview EPGs, displaying programmes in a grid, nine channels at a time, with the current programmes highlighted white and subsequent programmes grey. Programmes scheduled as a timer event are coloured red. You can scroll up and down or jump forward or back 24 hours using the four coloured keys on the remote, or get a synopsis by pressing the Info key. Simple.


Hit Info while watching live TV and the onscreen banner gives all the relevant details. But here’s a nice surprise – you can use this banner to search through forthcoming shows on any channel without leaving the programme you’re watching or entering the full EPG.


The beauty of the MDR-240 is that you don’t have to keep referring to the manual if you get stuck. The Help button on the remote brings up a series of text pages explaining many of the unit’s functions and how to use them.


The remote is almost as big as the box itself and although it looks a bit tacky, it’s actually borderline genius – the well-spaced buttons, no-nonsense labelling, ergonomic shape and ‘easy grip’ back panel make it one of the best digital TV remotes we’ve encountered and will go down very well with newcomers to Freeview. There are dedicated buttons for all the often-used functions, and importantly, the EPG, Menu and Info buttons are positioned close to the menu controls.

As for digital text performance, the BBC’s service appears almost instantly after pressing the button and subsequent pages load up with equal speed. ITV’s text service is very sluggish however, to the point where we gave up waiting. Audio Description is a useful feature for the blind or partially sighted and it can be set to low, medium or high volumes in the setup menu.

If you’re worried about the unit’s energy consumption, don’t be – it uses 1.5W in standby and 3.9W in operation, plus an auto standby mode kicks in every night at 3.30am to stop you leaving it on accidentally. There’s also a manually selectable screen saver mode that stops your TV getting screen burn. 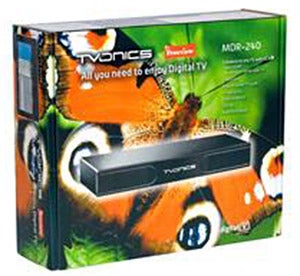 Channel changing is lighting quick and the unit’s robust tuner ensured strong, stable pictures throughout our test (conducted near Exeter, which has already switched over to digital). Picture quality is extremely pleasing through the RGB SCART, particularly when watching BBC channels. They boast bold yet natural colours, tightly-contained edges and smooth movement. Detail reproduction is solid, and although mosquito and MPEG block noise often rear their ugly heads, it’s just an unfortunate bugbear of Freeview broadcasting and not something that’ll greatly affect your enjoyment.


It may not be much to look at and the feature list is basic, but the MDR-240 is still an affordable, reliable and easy-to-use Freeview receiver that will impress experienced users and novices alike. It carries out its tasks without fuss and the excellent operating system makes it a joy to use – you can’t really ask for much more from a Freeview box.