After the mess Acclaim made of its flagship FPS series, it’s amazing that anyone remembers Turok, let alone looks forward to a new HD incarnation. Cast your mind back, however, to the early days of the Nintendo 64 and it was a different story. While the early primitive console FPS games were merely trying to ape their PC brethren, Turok took a different approach with incredible results. Out went boring brown corridors and space marines. In came lush jungle environments and dinosaurs. Out went shotguns and rocket launchers. In came knives, bows and grisly special weapons. Turok even added platform elements to the FPS, with some success. These days we might mock the ludicrous quantities of mist the game used to hide its pitiful draw distance, but Turok was arguably the Halo of its day. It didn’t just show that a console could produce a PC quality FPS – it showed that a console could produce one that made PC owners jealous. 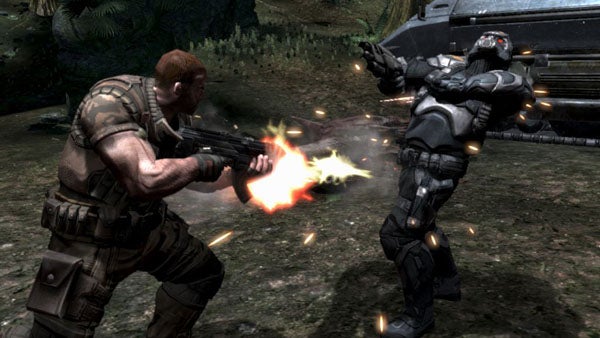 So the big disappointment in the new Turok’s early stages is that a series that made its name by ringing the changes now seems so desperate to fit in with the crowd. It’s one thing to make our new hero, Joseph Turok, a strapping space marine; quite another to place him in a clichéd gritty sci-fi setting – someone has been raiding the Aliens/Starship Troopers dress-up cupboard again – and get him involved in what looks like your bog standard men on a mission setup. We’ve got a rogue military unit, a strong-but-silent hero who used to be part of them, and a gang of special forces hardnuts sent to find them. Once all the preamble is over, Turok’s battle cruiser is suddenly shot down, crash-landing on a mysterious planet where his ex-comrades, now enemies are based. Can Turok find his fellow survivors, get his former mentor and escape alive? Frankly, it’s a challenge to care. 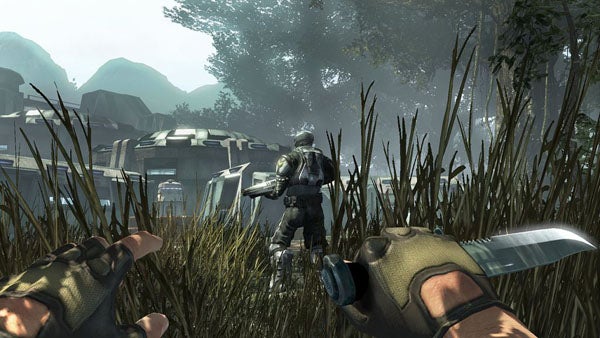 Why, you ask? Well, to be fair Turok is a more impressive product than you might expect. Keen to make a mark on the competitive console market, Propaganda Games and Disney’s new adult game studio at Touchstone has clearly put a lot of money and effort into making it so. The graphics are powered by a tweaked version of the Unreal 3 engine and – at its best – the game looks pretty good. The rugged jungle environments are reminiscent of Ubisoft’s work in King Kong, while the character models look solid, are atmospherically lit, and stand up to close inspection in the numerous cut-scenes. Lighting, haze, weather and wet surface effects are frequently excellent. Most importantly, the dinosaurs – when they arrive – are big, impressive and can move with a terrifying speed. Turok has more than its fair share of ugly textures and a handful of rotten dinosaur models, but for the most part it actually looks better than some of the screenshots you see here might suggest. 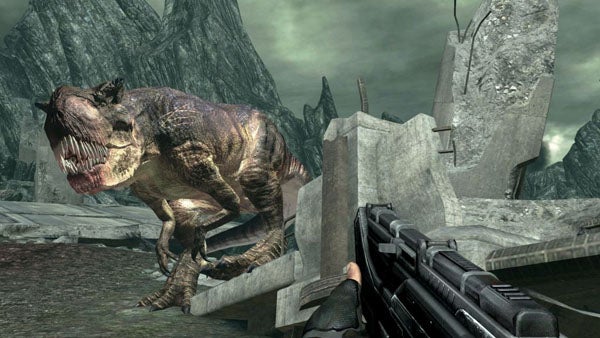 Touchstone has also splashed out big bucks on the soundtrack. The background score hits all the right action movie notes, while a voice cast including Powers Boothe, Timothy Olyphant and Ron Perleman means that the lines, while clichéd, are at least delivered with authority. There’s even been a certain amount of effort to give the characters, particularly our hero, some depth.

And if there’s one area where Touchstone has got the spirit of the series right, it’s in the weaponry. You’ve got your traditional shotguns, SMGs, sniper rifles, rocket launchers and pulse rifles if you want them, but early on the game introduces the knife, the bow and those cool explosive arrows as fundamental tools of the Turok trade. Better still, most weapons have a useful secondary fire option. The shotgun, for example, fires a handy dinosaur-attracting flare, the minigun can be set up as a sentry gun, while the pulse rifle doubles as a plasma grenade launcher. You can also dual-wield smaller weapons. 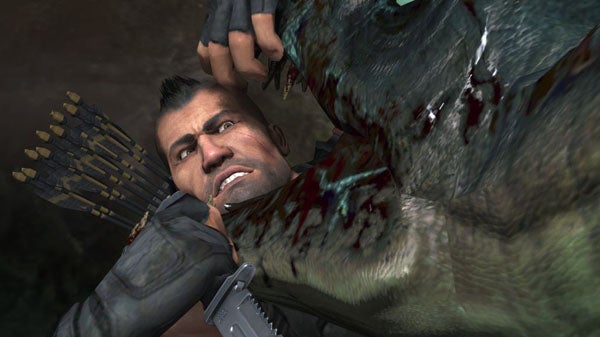 But here’s the problem: the actual gameplay is sort of schizophrenic. On the one hand, Turok wants to dish out the classic dino-hunting action we expect. On the other, it wants to be a gritty, military sci-fi shooter too. Unfortunately, when it is a gritty, military sci-fi shooter, it’s not a very good one. The pace is all over the place. The various military facilities are bland, poorly textured and uninteresting. Your human enemies are dull, with little to distinguish one troop or unit from the next. Their AI is only rudimentary AI. Annoyingly, what they lack in intelligence they make up for in armour, aim and firepower, meaning that you spend more time than you’d like whittling away at basic troops and recovering health that’s been wrecked by excessive enemy bombardment. The gunplay just doesn’t flow like good gunplay should. After Gears, CoD4 and F.E.A.R. this sort of combat no longer passes muster. In fact, even Sierra’s recent B-game TimeShift does it better. 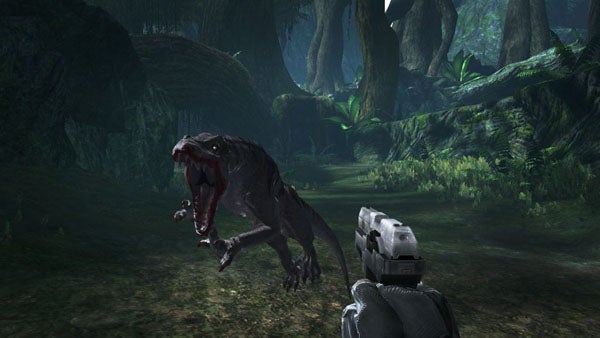 When the game pours on the dinosaurs – or mixes them in with the gunplay – everything improves. You can enjoy yourself by setting soldiers against dinos or even dinos against dinos, then coming in to mop up what’s left. While the over-large lizards aren’t exactly smart themselves – it’s a pitiful sight to see certain species running around in circles when they’ve yet to pick up your scent – at least they have ferocity on their side, and at various points you will find them circling you or knocking you off balance. At times the game shows the same joy as Peter Jackson’s King Kong remake in delighting you with new and strange monstrosities, including some of the finest giant scorpions of any game in ages. Basically, the more dinos or bigger dinos on screen, the better the game becomes. 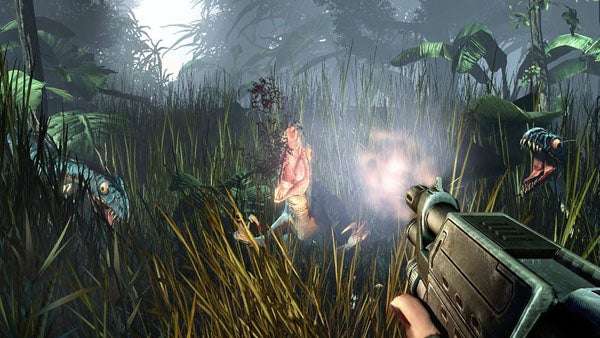 Yet even in the dino hunting the game makes basic errors. I like the fact that it can be tough to draw a bead on the toothsome beasties, and it’s only right that there should be moments of surprise and panic when you’re caught unawares. However, the use of quick-time event sequences is almost unforgivable, while the fact that many dinos are best dispatched with the knife makes the whole thing feel slightly ridiculous. The first time you equip the knife and press the right trigger as a raptor attacks is pretty cool, with the game moving quickly to a third-person cut scene as Turok side-steps the monster’s lunge and plunges the knife through its skull. When you’re dispatching five or six of the beasts in a row, it all gets repetitive and silly.

Still, at least these bits make Turok feel more like the highly trained, supernaturally talented scout we’d like him to be. Most of the time he moves, turns and aims like a tubby corporate exec on a paintball day out. He gets caught off guard on a regular basis. He seems unable to climb anywhere that isn’t clearly marked for climbing, and attempts at stealth – while encouraged by the game – are almost impossible to pull off. We want a Turok who can master his environment, move with fluid grace and pick off his enemies with guile and cunning, not one who does the same duck and cover routine as every other FPS hero on the planet. 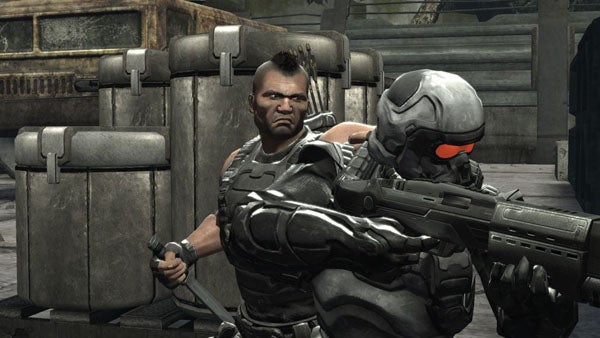 All this stuff I might be able to forgive. What I can’t is the overall lack of fine quality control and polish. Nowhere is this more visible than in the difficulty level – which reaches stratospheric spikes from time to time – the ally AI and the checkpointing. Having a sidekick taunt me is one thing, but having him taunt me when he’s just stood with his back to me while five raptors attack is quite another. The battle against an enormous mechanical spider tank would have been a low point in any game. Imagine being pounded so mercilessly that you’re knocked off your feet every three seconds, making it impossible to reach a desperately needed cache of ammo, only to find that the only way to beat the section is to ignore your instructions, pick up a rocket launcher before the thing even arrives and then run for the rockets before it starts firing. However, what adds insult to injury is the fact that the spider tank battle immediately follows a tricky section featuring several waves of heavily armed troops and a git with a rocket launcher. There’s no checkpoint in between, so every time the spider tank gets you, you get to repeat this all over again. This kind of thing isn’t atypical by any means. Poor checkpointing is a regular issue and the majority of the game’s boss battles are horrendous. 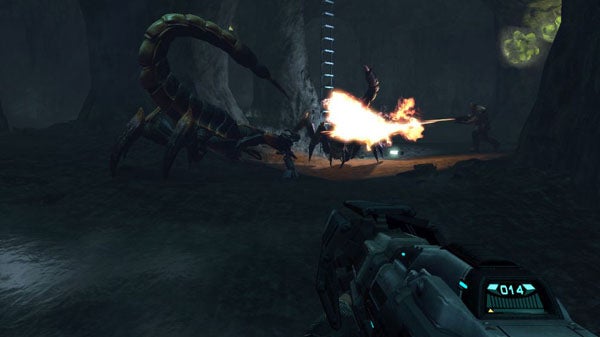 The game is just about saved by the excellent arsenal of weaponry, a handful of set-piece sequences where you get a glimpse of the game Turok might have been, and some fine online features. For a start, the weapon selection makes for a robust and entertaining deathmatch game – now with added dinosaurs. Then you find the co-op mode, where four players can battle against dinos and enemy forces on three dedicated maps. All the same, there are plenty of other games with equally strong – or stronger – online components, and with a better single-player campaign to boot. 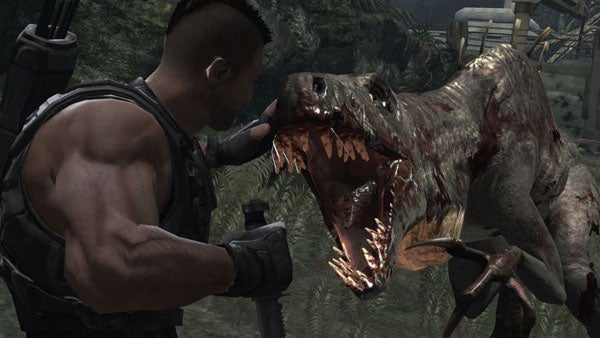 Which brings us to the crux of the review. We’ve just enjoyed a golden period of great first-person shooters. Whichever games platform you prefer you can enjoy games of the calibre of Call of Duty 4, The Orange Box, GRAW2, Halo 3, Gears of War, Crysis or The Darkness. In the next few months we’ll see Haze, Battlefield: Bad Company, Rainbow Six: Vegas 2 and Far Cry 2. In other words, there simply isn’t room at the moment for a flawed, second-rate shooter, and sadly that’s exactly what Turok is. It’s not a disaster, by any means, but it’s hardly the reboot this once-excellent series deserves.


Less Gears of War, more tooth and claw and we might have had a better Turok game. Wretched difficulty spikes and poor checkpointing outweigh some fine online features and the stronger aspects of a patchy single-player campaign.