IP cameras have traditionally been an expensive luxury that only the most security conscious individual would consider investing in. However, TRENDnet has been looking to change this by introducing a range of low cost basic IP cameras for the general techie public.


I looked at its mid-range fixed position camera, the TV-IP201W, a few weeks ago and was quite impressed by its feature set, performance, and most of all, price. However, by its very nature, once installed it could only monitor one fixed angle. So, if an object moved out of shot you were out of luck. The TV-IP400W I’m looking at today tackles this by having the ability to pan and tilt the camera enabling you to follow the onscreen action. 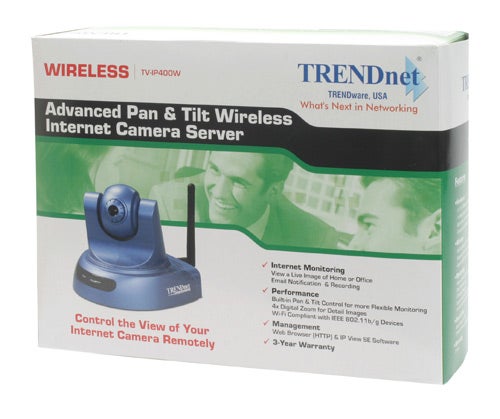 The TV-IP400W incorporates a 1/4inch colour CMOS sensor that has a maximum resolution of 640 x 480, operates at light levels as low as 2.5 lux, and can capture video at up to 30 fps. It has a 6.0mm F1.8 lens that is manually focused and has no optical zoom capability. Finally, the camera can be remotely rotated through -156/+156 degrees in the horizontal plane and -40/+40 degrees in the vertical plane.


For the price this is a good feature set but for anyone serious about remote controlled surveillance the lack of optical zoom and auto focus will be major turn offs. That said, the low light sensitivity should help for capturing those shady types in dark alleys. 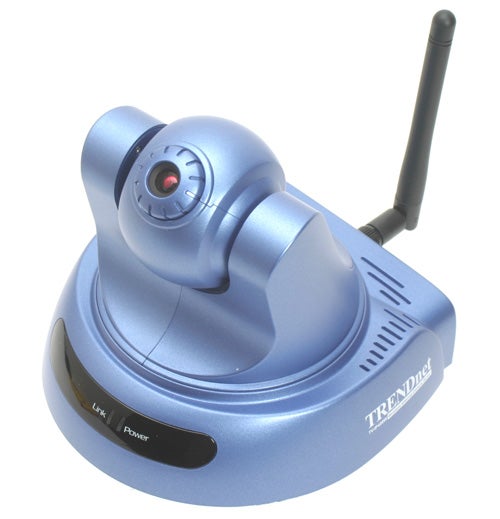 Following the pattern set by the TV-IP201W, the TV-IP400W is not the best built piece of kit. The entirely plastic body is just a little too flimsy for my liking and just handling the device was awkward for fear of it breaking. The TV-IP201W got away with it because it was just a solid brick of plastic but this camera has several moving parts so it suffers a lot more from its cheap production methods. The fact this camera is at the budget end of the scale makes this forgiveable though.


The TV-IP400W can be just sat flat on its back on a shelf or wall, and has little rubber feet to ensure a non-slip contact, but its primary function is to be mounted upside down either from a ceiling or using a case attached to a wall. For this purpose you’ll find a basic bracket in the box for mounting the camera indoors but for external mounting you’ll need to couple this camera with its dedicated external housing which is available separately. You are slightly limited as to where you can place the camera, though, as its power cable is only two metres long. 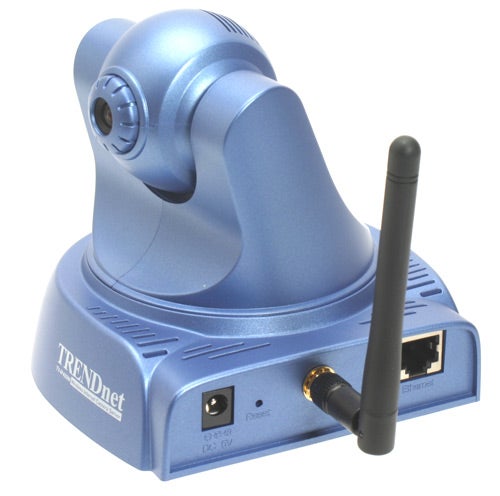 One area that the TV-IP400W is particularly lacking in is audio because, well, it doesn’t have any, so you can only monitor visual goings on. Also it doesn’t have any external triggering I/O ports so you cannot set off an alarm when motion is detected or turn the camera on when an IR sensor is tripped, for instance. Neither of these factors are deal breakers but they do relegate this device from a one piece does all surveillance kit to a constituent part.

Setting up the camera is very easy and the process follows that of most other IP camera’s out there: plug the camera into the mains, attach it to your network using a wired connection, install the software, and wait until the software finds your camera. The software will search for and display a list of all your attached cameras and if there is an IP conflict you can change the camera’s IP address from here. Once a valid IP is assigned to your camera, you can then double click it and your default browser will open and go to the camera’s web interface. The web interface enables you to control every aspect of the camera from your browser and, once you’ve set-up Internet access, you can access it from anywhere around the world.


Opening the web interface you are greeted by a still picture of the current view. Above this are options for viewing the video feed, using either ActiveX or Java, and opening the system administration menu. 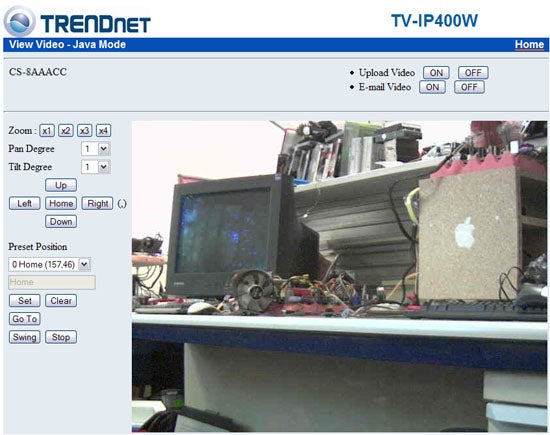 In the video view mode a stream of video is shown at its native resolution with a series of controls to its left. You can pan and tilt the camera and you can specify how much the camera turns with each increment. You can also zoom in using the 4x digital zoom and turn on upload or email video recording – these will send a recorded video stream to your specified FTP server or email address ready for viewing later or keeping for your own records.


In the system administration you get a very comprehensive list of options for video, network, user access, FTP upload, and email notification, some screen shots of which you can find at the end. Of particular note are support for wireless encryption using both WEP and WPA, UPnP support, scheduled video upload, and, scheduled email upload.


Being a fixed focus lens it takes a bit of effort to get the camera setup – especially if there’s only one of you – but once focused the picture is quite acceptable, assuming you’re in a well lit area, with only the slightest hint of barrel distortion. Turning the camera away from the daylight streaming through our windows and towards the darkness under my desk, the gain boost required to cope with the low light level introduced a horrible amount of image noise rendering the image mostly unusable. So, though the sensor may be able to detect light levels as low as 2.5 lux it doesn’t mean you get a decent picture at that illumination. Moreover, the viewing angle isn’t particularly good and you will probably find yourself doing a lot of panning and tilting if you’re trying to track an object. Comparing to the camera on my Sony Ericsson K800i – a fairly standard wide angle snapshot camera – I was getting about half the viewable angle.

Video is compressed using the M-JPEG standard which is nowhere near as efficient as MPEG4 but does capture greater detail per frame. Using the full 640 x 480 resolution requires the frame rate to drop to only 10fps and lag is very pronounced – even on our Gigabit network. Dropping to 320 x 240 results in much smoother video and lag becomes minimal. Experimenting with the compression settings and resolutions should enable most users to find a reasonable compromise between picture quality, bandwidth, and frame rate.

Included in the package is TRENDnet’s IP camera surveillance software which is called IPView. The previous version of this software impressed me with its simple layout and fairly intuitive interface. Unfortunately, TRENDnet has taken a step back with its latest iteration and has ended up with something reminiscent of Winamp with a particularly bad skin on it. Buttons aren’t labelled and require a mouse over pop-up to indicate what they do and there’s no normal drop down menus to fall back on. Put simply, absolutely nothing is intuitive. Fortunately, given the relatively simple set of tasks this software has to do, it doesn’t take long to become familiar with its idiosyncrasies and get up and running. It can monitor up to four cameras, has options for motion detection, and you can access the cameras web interface for changing all the settings therein.


The TRENDnet TV-IP400W offers an impressive set of features for such a cheap IP camera and it backs it up with a solid level of performance in well lit areas. However, the poor low light level performance and lack of audio do limit the applications for which this camera will be useful. Also, the less said about the software, the better. 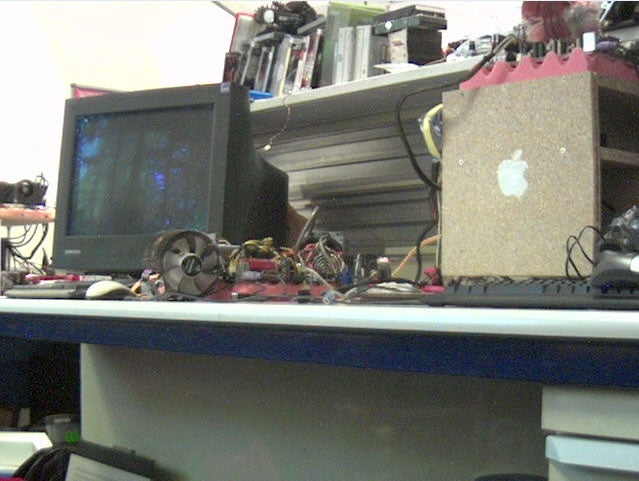 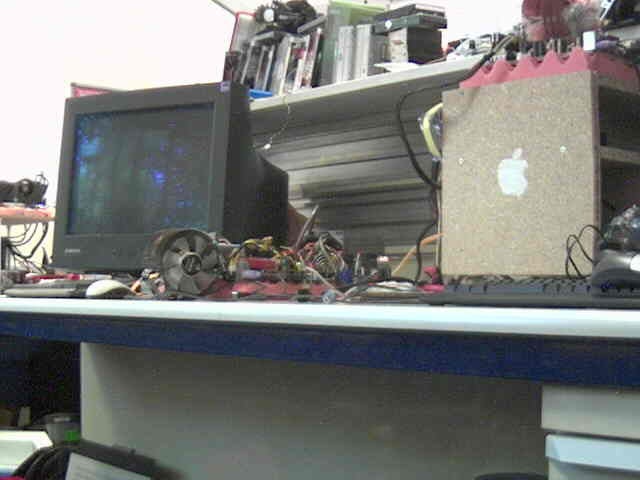 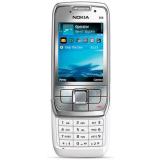 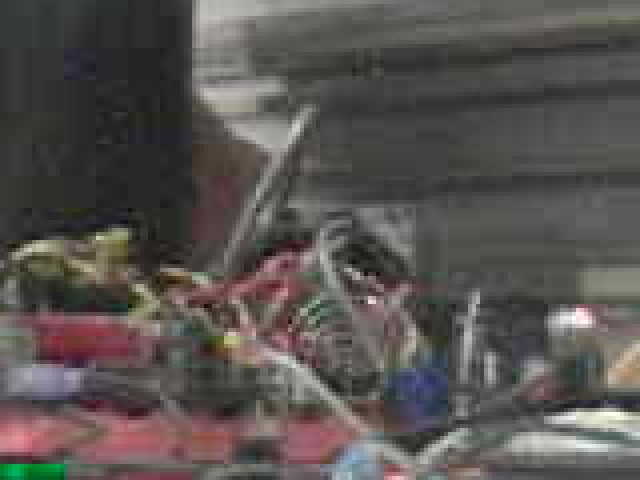 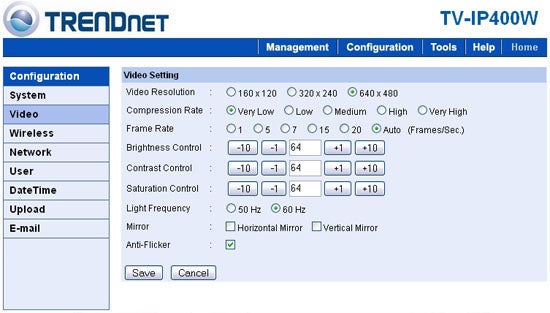 Video settings provide enough options for most people to find a decent compromise between performance, bandwidth, and video quality. 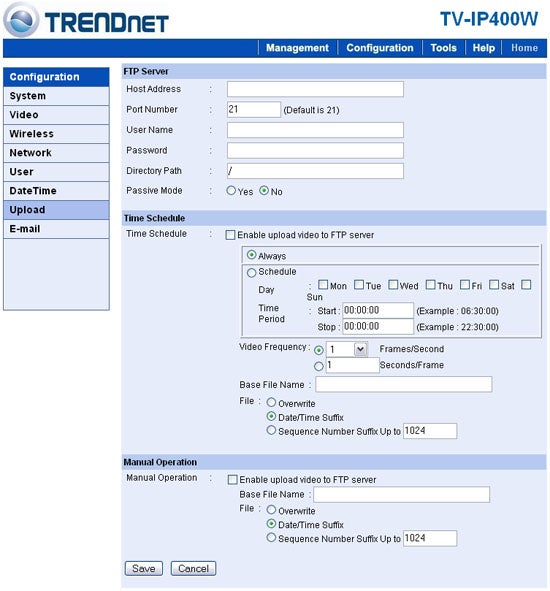 You can schedule video to be captured and uploaded to an FTP server or sent to an email address.