In a year when everyone’s getting excited about community-generated content, thanks to Little Big Planet, Spore and the rest, it’s worth remembering that the PC has been quietly doing this sort of thing for years. Similarly, as the ‘back to basics’ gameplay bandwagon builds momentum, it should be noted that it really kicked off in the indie games scene on the PC. You’ll find both elements in TrackMania United Forever, the latest in the TrackMania series, and newly downloadable from Steam. 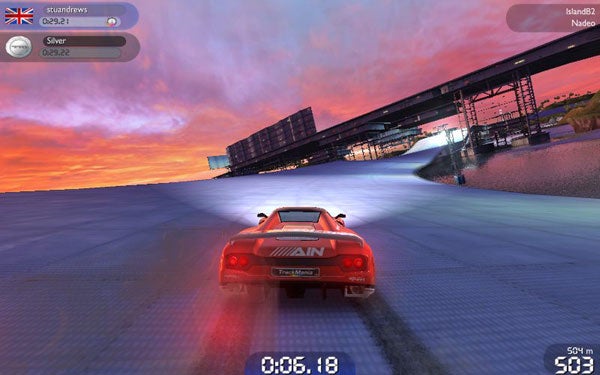 Inexcusably and rather embarrassingly, this is the first time we or I have looked at TrackMania. If the same is true of you, you might be wondering what it’s all about. Well, it’s basically a simplified driving game built around some cool community features and an integrated track editor. The simplicity is key; the tracks are relatively short, the controls use the cursor keys for accelerate, brake, left and right, and all you need to worry about is getting from the start to the finish as rapidly as possible. The physics system is sophisticated enough to make things interesting, but unrealistic enough to make things accessible and fun. You can pick it up, play it and get it within five minutes. Putting it down again is another thing altogether. 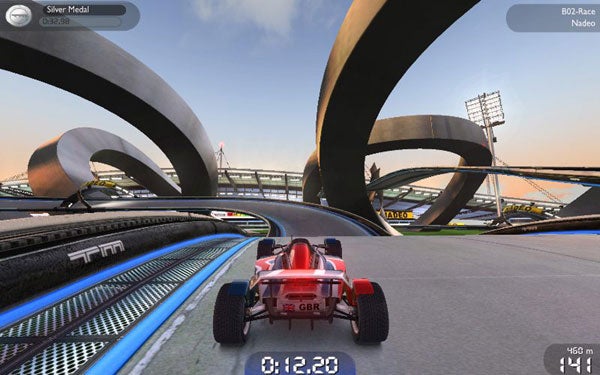 For a taste of TrackMania, just log onto Steam and download the free Nations Forever game. Go on. Do it now. There’s really no excuse. Opt for a spot of solo play and you’ll see a series of challenges in colour groups of ranked difficulty and steadily increasing in challenge within those groups. Each one is basically a start to finish time trial, but Trackmania doesn’t do time trials like other racing games. That’s mostly because Trackmania doesn’t do courses like other racing games. Trackmania courses have ramps, bumps, obstacles, ridiculous sky-high banks, loops, half-pipes, speed boosts and tunnels where your car can travel upside-down. At times the course may be elevated hundreds of feet above the ground. The trick to TrackMania isn’t getting from A to B fast, it’s also getting from A to B in the first place. 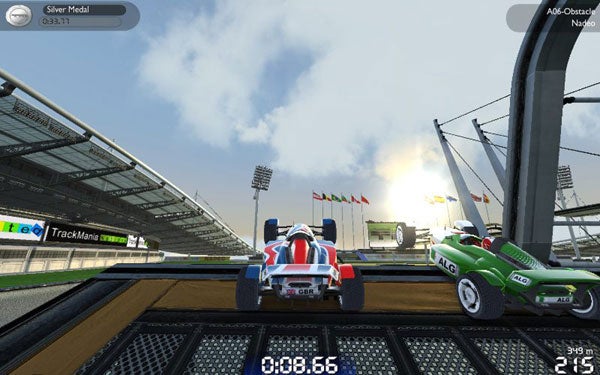 The crucial thing – and what helps make the experience so addictive – is that the tracks are short and an instant restart is only a second away. You race, you twist, you turn, you soar and – smack! – you miss the downward ramp and plummet to the ground. Undaunted, you restart. You race, you twist, you turn, you soar, you land and – doh! – you fly off the track as you try to turn on the other side. Restart. Restart. Restart. Restart. Victory! You’ll keep coming back until you get it right. Think of it as a box of chocolates to your regular racing game’s king-sized Mars bar. The fun might come in small chunks, but they’re incredibly more-ish and before you know it the whole box has gone.

Even when you get it right you’ll go back for some more. For one thing, TrackMania has a medal system. You can choose to race against ghost cars for either of the three medal times, and as you move up the ranks getting gold gets harder and harder and harder. For another thing, you’re competing against other players on the leaderboard. Cleverly, the original release of TrackMania Nations added the concept of Nations and Regions, and every time you post is compared against players globally, players from your own Nation (for me, the UK) and your own region (for me, the South-West). All this accumulated data, is then used to give you a ranking in each category. This is another big draw. Do you really want to be 32, 445th in the world for long, or 175th in Wales? Then you’d better get out there and race. 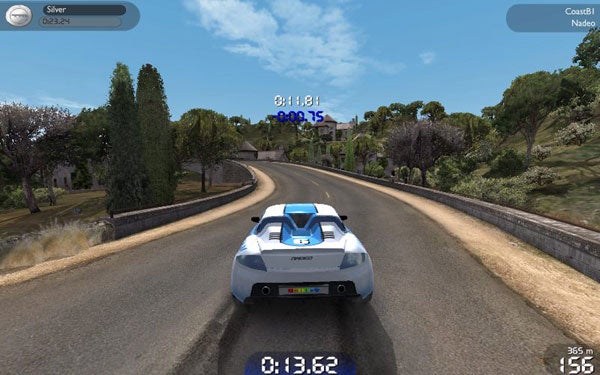 Nations Forever is great, giving you a lot of gameplay for your zero – I repeat, zero – pounds. You can even play online. It’s not quite online racing, as you’re really competing simultaneously with 30-odd other ghost cars to get the fastest time or complete a set of laps, but the fact that you’re all doing it simultaneously adds a certain magic energy to the mix. Friends and clans are supported as well, giving you further impetus to get involved. 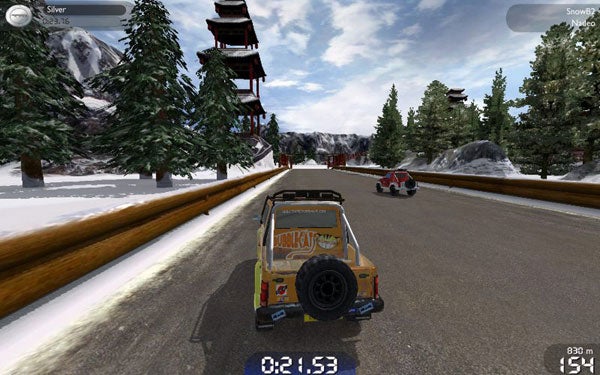 What, however, does United Forever add to the mix? Well, TrackMania works around a number of different environments and game styles. Each environment has its own style and uses a specific range of building blocks for its courses (we’ll be coming back to this later). More importantly, each environment has its own car, and each one has its own distinct feel and handling dynamics. Game styles, meanwhile, include your basic race style, plus stunt courses (where the emphasis is on earning points through flips, rolls and spins) and platform courses (effectively turning TrackMania into an automotive Super Mario). Nations Forever gives you one environment (the vaguely Formula 1 themed Stadium) and a single game type (though you could argue that it’s a conglomeration of every game type). United Forever gives you the lot. 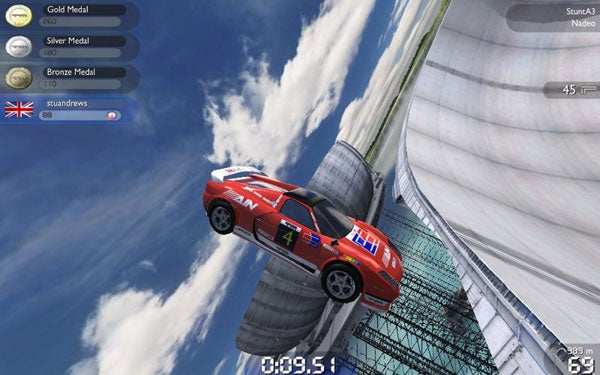 Now, it’s not all perfect. Arguably the Stadium-based Race challenges are the pick of the bunch. Of the other environments, Island gives you fast sports cars and fiendish corners, while Coast gives you a Ridge Racer feel with plenty of drift. Bay is more about platform-hopping in a bouncy 4×4, while the Snow levels are all about jeeps and savage inclines. Desert is the most distinctive, with roll-prone muscle cars and tracks designed to ensure they do just that. Rally is exactly what you’d expect. All have their entertaining parts, but you’re bound to get more involved with some than others. So far, I haven’t really enjoyed the Snow or Coast courses, while I’ve loved the Stadium, Rally and Island efforts. They just haven’t felt so convincing. The same goes for the game styles. For my money the platform courses get too tricky too soon to be all that entertaining, though the stunt events really are a lot of fun.

Looks play a part here too, as not all environments look equally impressive. Generally speaking, TrackMania United Forever is a good looking racer without being a great looking one. It has well-built models, clean lines, great water and reflection effects and a decent lighting system. It works on a wide range of systems, running at a blistering frame rate with everything turned on on my Intel Core 2 Extreme and Asus 8800 Ultra graphics card, but coping without many compromises on older machines as well. However, while the background scenery in the Stadium and Coast environments is gorgeous, it’s a bit plain and even dated in the Island and Rally courses. I suspect this is because they stem from older versions of TrackMania and have had a new lick of paint applied on top, but in any case they let the game down slightly. 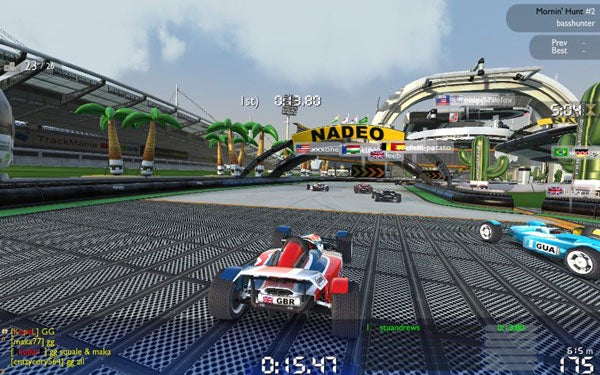 All the same, you’re getting a lot of content and most of it is very good. What’s more, there’s plenty more online to download. TrackMania United Forever has its own currency system – you’ll earn it by collecting medals – and you can use that currency to buy new tracks from the range of user-created sites you’ll find online. Cleverly, you get to these using the game’s own integrated browser. There’s an awful lot out there, and some of it is great. 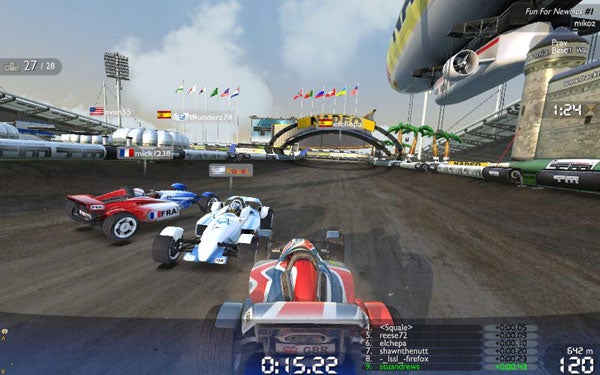 Why is this? Because one of TrackMania’s biggest features has always been its built-in track editor and file sharing facilities. The editor is based on a good old-fashioned tile placement system and is incredibly simple to use. In fact, the only thing you might complain about is that it’s not smart enough to auto-suggest the next tile in the way that Rollercoaster Tycoon’s track editor used to. If you really get into it, the game even features track editing in a special puzzle mode: join the various preset track pieces together, drive the course, and see how well you’ve done. 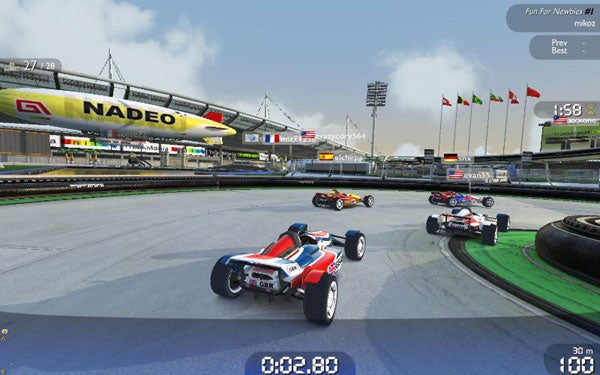 Even having said all this, I still feel I haven’t got to the heart of what makes TrackMania United Forever so special. There’s something so welcoming and fun-loving about the game – and about the community that’s grown around it – that it’s practically irresistible. Sure, you’ll have moments where that medal falls out of reach or you can’t complete the damn track and the veins in your temples will start throbbing, but a lot of the time the game fills you with a rosy glow that somebody cared enough to make this game so enjoyable and still cares enough to keep improving it. It’s also worth noting that this is the first TrackMania to come without that aggressive Starforce protection system that annoyed many users in the past. 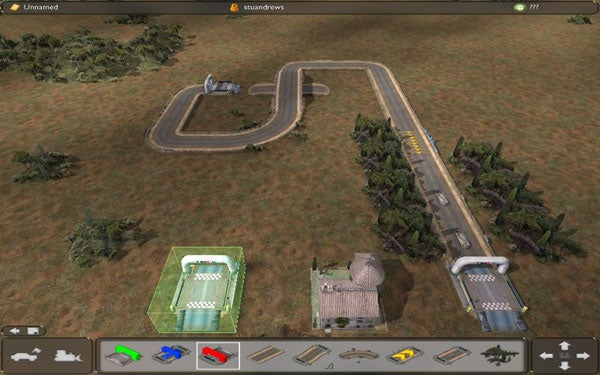 To my mind, TrackMania Nations Forever is an essential download, and if you like it, TrackMania United Forever is an essential buy. I have a wish list of things I’d like to see in future instalments – a revised graphics engine, a more coherent look, a spot of damage modelling and a ragdoll driver for a start – but without these things it’s still an excellent game. I’ll see you on the start-line. Make it soon.


Try Nations Forever then buy United Forever, because if you haven’t got some already, you need a little TrackMania in your life.