Available on Xbox One, PS4 (reviewed), PC
If there’s anything I love about Trackmania Turbo, it’s its single-minded devotion to being the best Trackmania it can be. Nadeo has given up on trying to build the ultimate racing construction kit or making a game that’s all things to all racing fans, instead focusing on making Trackmania Turbo the definitive wacky time trials game. In a whole bunch of ways it’s succeeded. Like time trials? Like Trackmania? You’re in for one hell of a drive.

Nearly every activity here boils down to one thing: car versus track in the quest for the fastest time. Even racing online or in multiplayer, where you might be competing with a hundred players on the same track at the same time, there’s no sense that you’re chasing them around the next corner or racing them to the finish line, but just one of many drivers endeavouring to shave a few more seconds or fractions of a second off your time. You all have the same car and all face the same bends and hazards. All that matters is how skilled and daring you can be.

Here it’s the tracks, not your rival racers, that make the challenge. Turbo divides them into four distinct classes. Canyon Drift, where you’ll drive drift-heavy cars around wide, sweeping bends, is followed by Valley Down and Dirty, where you’ll speed rugged buggies along off-road tracks. After that we get Rollercoaster Lagoon, where more precise racing karts meet sand, jungle and ludicrous loop-the-loop courses, and International Stadium, where F1-style cars race along gleaming sci-fi tracks. Each class has its own style and handling model, but what binds them all together is Nadeo’s predilection for crazy jumps, gravity-defying banks and u-turns and the sort of track elements that make more sense at a theme park than in a raceway. 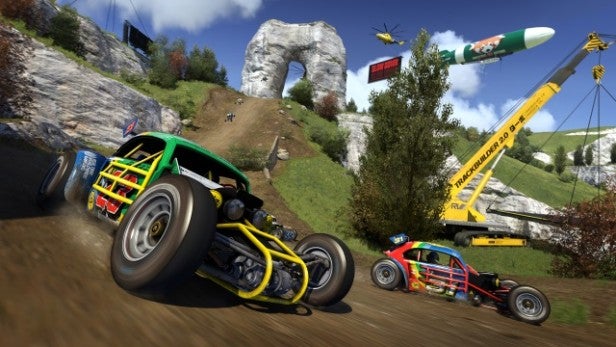 These tracks are tough, but they’re matched by a robust physics and handling model which is realistic enough to feel vaguely convincing but cheats enough to keep things exciting. Even the most impossible-looking jumps, curves and twists can be handled if you can master steering and drifting and hit the accelerator or the brake at the right time. When the ghost car or another driver is posting better times than you, it’s either because they’ve been very, very lucky or because they’ve learnt the track and shown more skill. Turbo might be demanding, but it’s nearly always fair.

And there’s a real smorgasbord of stuff here, too. The main campaign takes you through five leagues of ten events per class, giving you a total of 200 tracks, each one a challenge in its own right. You can play these solo, in local multiplayer, complete with pass-the-controller party play, or online with a decent lobby system and custom selections of tracks. 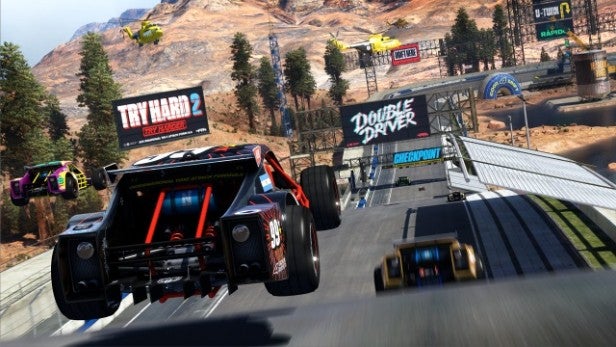 On top of this, you can create your own tracks and challenge other players to beat your times, thanks to an enhanced version of the track editor with a streamlined mode for newbies and even a random track builder for those who have neither time nor inclination to do the work themselves. The latter doesn’t always produce good or highly playable tracks, but it’s an easy way into the business of making them. Plus, as tracks can’t be uploaded until validated with a successful completion, you know that nothing you find will be totally impossible.

At its best, Trackmania Turbo is a fantastic arcade racer. Sure, it’s not a big one for lifelike textures or realistic lighting, while the vehicles have a slightly last-gen look, but the sense of speed is incredible and there’s something lovably Sega-like about its bigger-than-life, blue sky style. There’s something exhilarating about cracking that silver time by a whisker, or moving ten places up the leaderboard when competing online. There’s even a hint of the Trials games creeping in as tracks evolve into high-speed puzzles, where half the job is working out how to make it through to the next checkpoint, with the other half actually pulling it off. 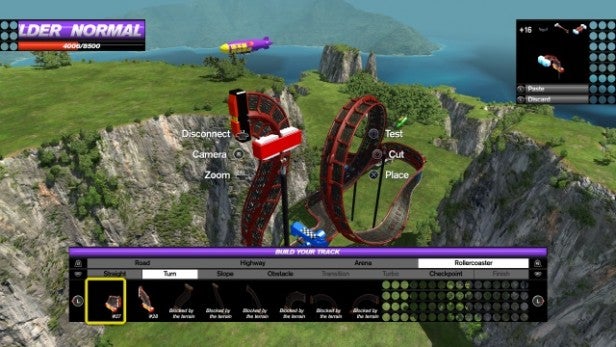 What’s more, it has found a new way to enjoy the game with Double Driver, where two of you work the wheel and pedals on two separate controllers, and the game somehow averages out your efforts. It’s not as tough as it sounds, but you do need to work in sync, making Double Driver a real laugh on some of the more challenging early tracks.

All the same while Trackmania Turbo is arguably the best Trackmania, there’s still a sense of a series that isn’t quite hitting its true potential. For a start, the problem with such a smorgasbord is that it’s a challenge to pack each individual dish with a distinctive flavour, and the longer you play Trackmania, the more the tracks start to blur into each other. You notice how elements are repeated from track to track, and fewer and fewer courses leave much of an impression. 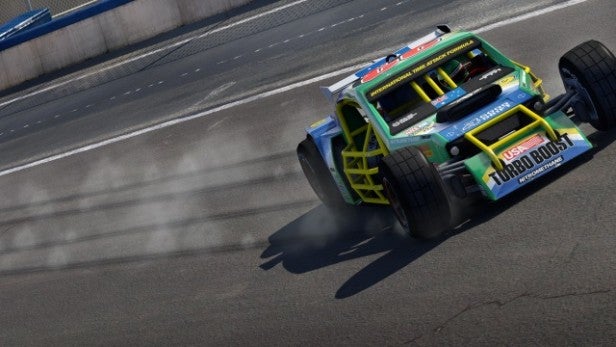 When they do, it’s often for the wrong reasons. Even in the quite early stages, Turbo can be frustrating. Hit a ramp from the wrong direction, go too aggressively into a corner or even misread how narrow a gateway is and you end up flying off the road or into the scenery and – realistically – it’s curtains for that go. There is a checkpoint feature, but as this doesn’t reset your time there’s little reason to make use of it, particularly as a few seconds can mean the difference between bronze and silver or bronze and no medal at all. You might as well just go for the rapid one-button restart.

Most of the time you can see the obstacles coming, but every now and then a concealed turn or jump or even an obtrusive tree or rock can catch you out. Throw in the skittish handling of the Lagoon and Valley vehicles and the occasional abrupt shifts of point-of-view, and even relatively short races can cause you headaches. Unfortunately, someone at Nadeo decided that putting three-lap events in the fifth and tenth slots of every group was a good idea. If you thought blowing a sixty second challenge through one error was annoying, imagine how much more annoying it is when you’ve just thrown a three-lap effort.

Up to a point, the challenge of Trackmania’s levels is part of their appeal. You just know that if you go back in you can take off a few seconds, move up the regional and global leaderboards and even grab the next medal. Yet at times, it works against the game. If one track causes so much grief, do you really want to have another crack? Still, a little frustration is par for the course in any time trial game, and it’s not like the Trials games have been short of infuriating difficulty spikes. Instead, what seems to hold Trackmania Turbo back is that it doesn’t seem to be moving the series on. It’s a highly polished and remastered greatest hits of a Trackmania rather than a new LP. There are changes – Double Driver, some new track elements – but nothing that makes you feel that you’re not playing anything that you haven’t played before. And when Trackmania emerged, it did feel new and exciting. The series needs a little of that spirit to return.

Verdict
Trackmania: Turbo is a great Trackmania, crammed with all the ludicrous looping tracks and puzzlers that fans could as for, with enhanced visuals, stronger handling and a good selection of local and online modes. However, it can also be hideously frustrating, while there’s a sense that it doesn’t really push the series anywhere new. At the budget price it’s still a great buy both for fans and newbies, but it’s going to take a little more to craft Trackmania’s masterpiece.