In Trackmania 2: Canyon, pride definitely comes before a fall. In fact, pride also comes before a disastrous spin, a ruinous encounter with a crash barrier, an embarrassing last-minute fumble while taking off on a ramp and a brutal collision with a concrete wall. It’s not so much that Trackmania 2 goes out of its way to punish any hubris. It’s more that it gives you a multitude of ways with which you can punish yourself. 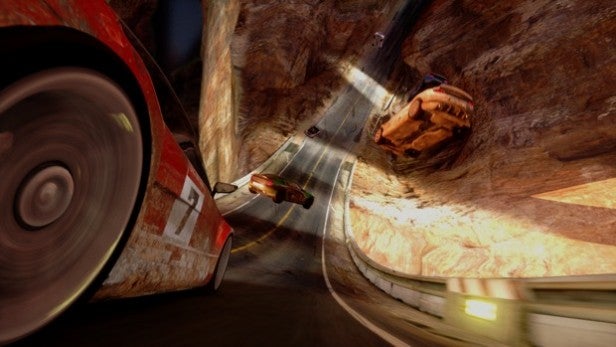 If you’re a Trackmania fan, it’s almost needless to say that the game is great. You’ve probably been playing it since it went live last week – in fact, you probably haven’t had time or energy for an awful lot else. For those of you who are unfamiliar with the series, however, here’s a quick introduction. From a distance, Trackmania looks like an ordinary arcade racing game in the vein of a Ridge Racer or Need for Speed. Nothing could be further from the truth. Instead, Trackmania is effectively a time trial game, where your job is to post the fastest time you can for any given track.

The thing is, Trackmania tracks aren’t like other tracks. They’re chock-full of bumps and jumps and loops and corkscrews, where you might be expected to take off from one slim ribbon of tarmac sitting hundreds of feet in the air and land on another slim ribbon of tarmac just below. Many modern racers are about getting as close as possible to real driving, but Trackminia takes the polar opposite approach. Trackmania is about doing things you can’t do in real life, for the simple reason that people would get hurt. And when we say ‘hurt’, we really mean smeared over a hard surface at the approximate consistency of a meaty bolognese sauce. 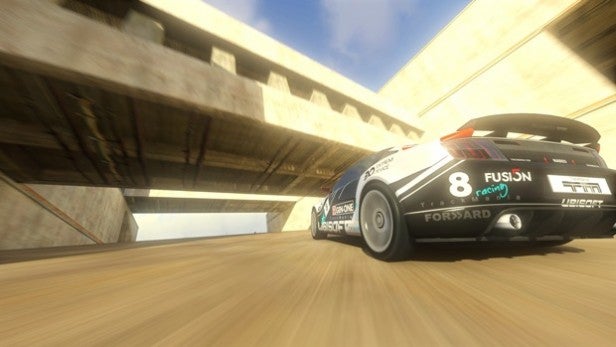 The magic of Trackmania 2 lies in three key things. Firstly, it’s challenging. The handling is closer to Ridge Racer than Gran Turismo and these cars have never rolled off a production line, but that doesn’t matter. This is a game where skill, nerve and experience always count. Whatever happens, you always want to do better; to get the next medal up or just shave a fraction of a second off your time. When you finish an attempt and see the button marked ‘Improve’, it’s the gaming equivalent of a gauntlet slap to the face. Are you really going to leave your best time at that?

Secondly, it’s a challenge you can share with other people. Even playing solo, the game has you driving alongside other player’s ghost cars, so you can see where they go wrong and – if you’re lucky – where they went right. Played in multiplayer, you’re not really racing other players, more taking part in one grand and spectacular record-setting attempt where you all happen to be trying at the same time. There’s something comforting and really quite funny about 20 cars hurling themselves off a ramp at the same postbox-shaped gap in a monstrous wall. Particularly when all of you miss.

Most importantly, it’s a game that’s always growing. The game’s developer, Nadeo, has released it with five tiers of tracks for solo players to work their way through, but the game includes its own track editors (one for beginners and one for more advanced users), and using them practically anyone who can use a mouse can make more.

As always with these things, some of the output will be rubbish and some will be utterly inspired, but the best tracks will be reviewed and rated and find their way onto the multiplayer servers, where a community of thousands – potentially millions – will throw themselves over, under and possibly right through them. If you’re the type who used to spend hours setting up loops and curves of plastic track before rolling die-cast cars along it, this will take you right back to those rosy childhood days. 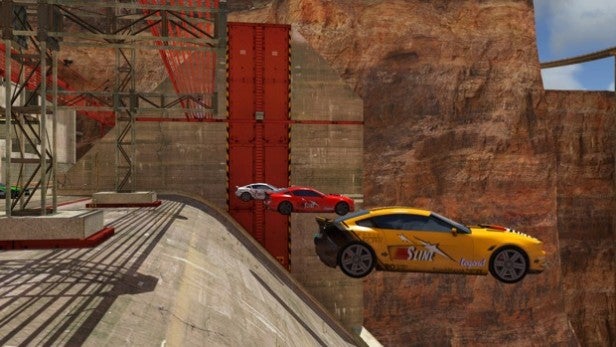 Much of this stuff will be familiar from early incarnations, so what does Trackmania 2 bring to the table? Well, the first thing you’ll note is slicker presentation. This is a game that’s pushing for a wider audience, and while it could still do a better job of explaining the fundamentals to novices, it’s easier than before to just get playing. It’s also a much more focused game. Where the last few incarnations of Trackmania made diversions towards platform and puzzle courses, Trackmania 2 is much more single-minded in its obsession with high-speeds, crazy stunts and quicker times. The handling has a bit more weight and the physics feel more robust and refined. It’s a stronger, meatier game for it.

The biggest change, however, is in the graphics. Trackmania has never been on the cutting edge – it’s always been the kind of game you could play on a half-decent laptop – and it still isn’t cutting edge in the sense that Forza Motorsport 4 or Need for Speed: Hot Putsuit are. However, with more detailed textures, more realistic cars, some beautiful lighting and some superb speed-blur and bloom effects, it finally looks like a modern racer. 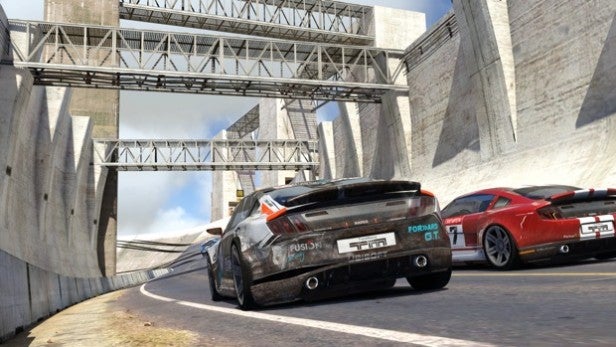 Where previously Trackmania could look a little abstract, the weed on the desert floor and sparkling water in the gulleys now makes it feel rooted in some twisted form of reality. That this all works with dozens of simultaneous racers travelling at ridiculous speeds is quite impressive. What’s more, Trackmania 2 still scales back nicely on a laptop, and we’ve been switching between a suped-up gaming rig and a modest Core i3 laptop during play without the latter seeming the lesser experience in any way. That’s great, because if any game is ideal for a quick ten-minute burst of action, this is it (even if it’s funny how that ten minutes soon becomes an hour). 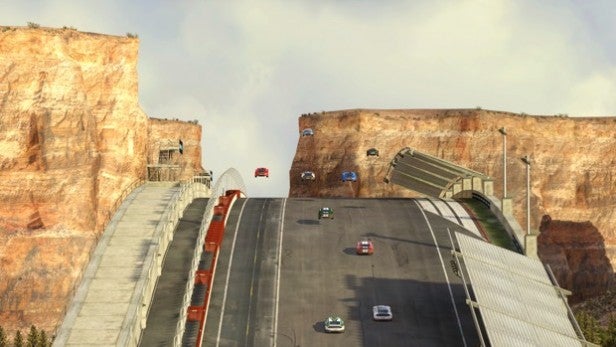 Some might describe it as more an evolution than a revolution, but really the only fault with Trackmania 2: Canyon lies in the last bit of the title. Like all of Nadeo’s new ManiaPlanet line, Trackmania 2 is designed to be modular, and Canyon is really just the first installment.  This is reflected in the £20 price tag, and we’re promised new and affordable environment packs soon, but while there’s more range in the Canyon setting than you might expect, a few hours still leave you longing for some more varied and exciting scenery. It leaves us thinking of the original Motorstorm, which managed to get a whole selection of tracks, each with a different look and feel, out of one Monument Valley setting. Still, this is a fairly small niggle, and one that doesn’t seriously diminish the fun, thrills and excitement of this deeply lovable game.

Verdict
With this slicker, more spectacular sequel, Trackmania looks ready to take over the world. Whether you’re a talented track-maker, an obsessive racer or just a casual gamer with a laptop and a few hours to kill, it’s an excellent way to waste valuable time.