The Total War series is a thinking person’s favourite. Tactical war games that demand you assess what your opponent is doing at every turn, while offering unit-level command over your own troops, they’re highly addictive catalysts for the breakdown of relationships. Total War Battles: Shogun is an iPhone version of the series that tries to distil this sort of deep strategy into a casual format.

Sega’s approach is to blend the style of the classic PC games with the popular castle defence format, which was brought to the attention of mainstream gamers in Popcap’s Plants vs. Zombies. There is a campaign mode, but it is broken down into 10min or so levels assessed in standard casual fashion – each with a 3-star rating. 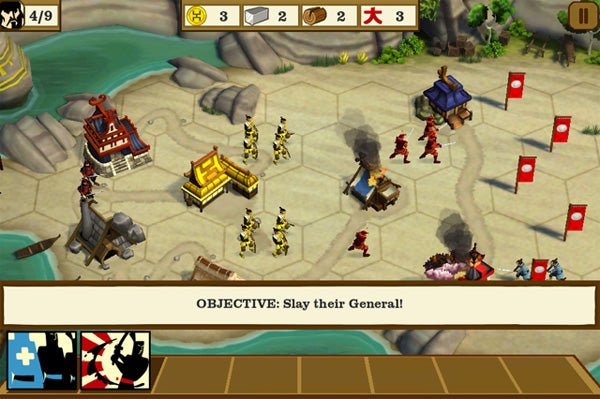 Soldiers are well-animated, as in the PC games

The battling is similarly streamlined too. You can’t make your troops retreat, only press on or make a diagonal moves forward across the hexagonal-tiled battlefield. Such apparent simplicity gives Total War Battles: Shogun a chess-like feel, forcing you to work within fairly severe restrictions and often sacrifice units for the good of the battle.

Limited movement, a castle defence core and casual styling – these are the kind of things that you’d think would put the Total War hardcore off. But there’s far greater depth and challenge here than in your average casual iPhone game.

After the first few introductory levels, you’re often dumped into the deep end, left to construct a village and army from scratch. Like a full-on PC strategy game, specific buildings are required to produce specific units, and often buildings need to sit right next to particular buildings too. With limited space on the battlefield, and limited resources – reaped from your surroundings during battle – Total War Battles is dense in a similar manner to the non-mobile versions.

It is by no means easy, either. Produce the wrong unit types and you’ll quickly find yourself overwhelmed and defeated. Thought and quick fingers are both pre-requisites for success here.

If you find it all too challenging, there is a way to ease the load. You can upgrade both unit types and buildings with experience points gained through that side levels that accompany main battle levels, the smaller nodes on the map screen. 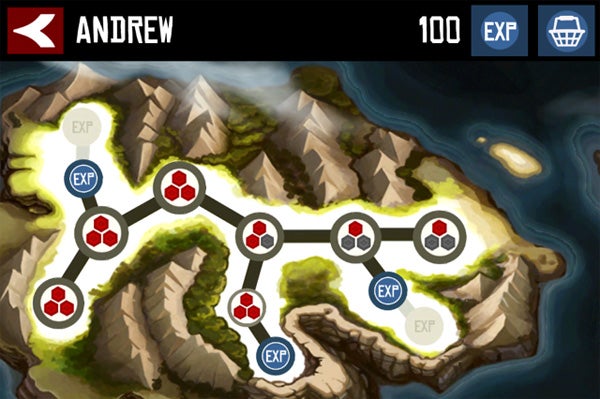 These are much closer to straight puzzle levels, requiring you to arrange buildings into a very precise arrangement, or send troops along a specific – but unspecified – path. They should provide light relief from the always-challenging battles. But instead they tend to frustrate, making earning experience feel like a chore. You can buy experience points through in-app payments, but when you’ve already splashed out £4.99 for the game, this isn’t so appealing.

Total War Battles: Shogun demands patience, both deliberately and in its failings. But persevere, apply patience and you’ll find a satisfying game of surprising depth. Central battle mechanics are still being revealed hours into the game, without any sense that you’re being spoonfed content too slowly. New troops are introduced regularly – to the extent that you’ll probably have to study up on the strengths and weaknesses of a few from time to time (holding a finger down on a unit brings up its info screen, thankfully), and the game knows how to satisfy upon a win, often forcing you to the brink of failure before handing you the victory. 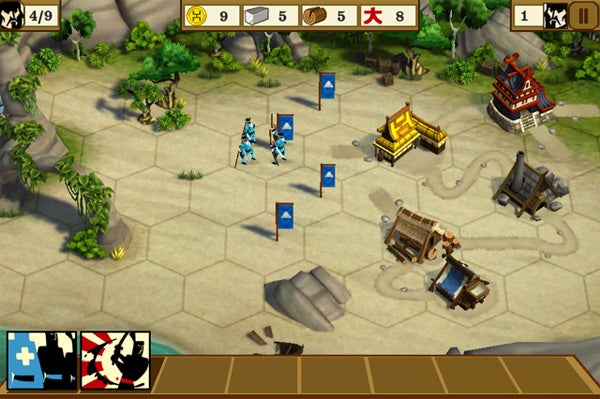 From a brief description, Total War Battles: Shogun may sound like what Total War fans precisely don’t want – a watered-down take on their beloved series. Within the framework it sets out, though, there are few stand-out compromises. It demands active strategy, features many hours of gameplay in its long single-player campaign and also offers one-device multiplayer. If anything, fans of the casual castle defence genre Total War Battles implements that should be put off, rather than the hardcore.