What are the Toshiba U Series UHD TVs?

Having been the first brand to launch a TV – the 55ZL2 – with a native 4K pixel count into the UK in 2012, we’ve been waiting expectantly and impatiently for Toshiba to roll out its 2014 Ultra HD 4K TVs. But we’re going to have to wait a bit longer than we thought, for Toshiba informed us when we visited its stand at IFA that it’s now looking to 2015 to launch its new U Series of 3840×2160 TVs.

Why the delay? Because 2015 is when Toshiba thinks 4K screens will hit a price point where they could shift in the sort of volumes that have become the brand’s trademark in recent years (it’s actually the second biggest shifter of TVs in the UK, behind Samsung).

With this 2015 launch date in mind, the U series models on show at IFA weren’t as complete in their specification as we might have hoped. But we still managed to glean some interesting things from the time we spent with them.

For starters, the U models on show are built around Toshiba’s current L74 series, meaning they benefit from Toshiba’s new backlight design which delivers a claimed 75% luminance boost over typical LCD TVs, along with a claimed 14% wider colour gamut. 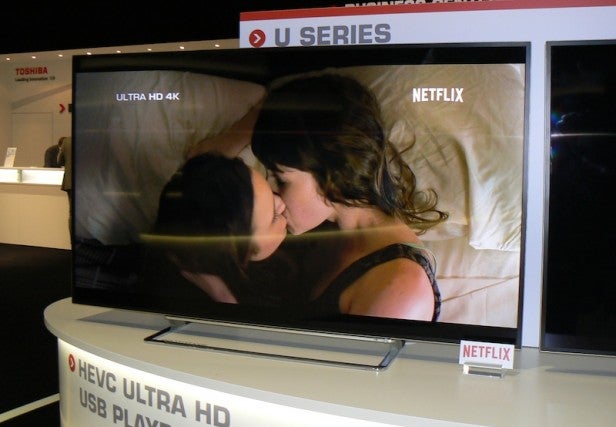 Less promisingly, it seems as if at least some of the upcoming U series models – 50-inch, 58-inch and 65-inch models were being shown – will join the L74 series in using IPS-type panels, with their potential contrast shortcomings. However, Tatsuhiro Nishioka, Senior Manager of Global Marketing for Toshiba’s Visual Solutions Division, suggested the UHD models may benefit from improved local dimming controls that may counter the IPS issues.

It’s also possible the U series TVs could benefit from an upgraded version of Toshiba’s excellent MediaGuide Replay feature, which automatically records to HDD any programmes it thinks you might be interested in based on your viewing habits.

Two MGR upgrades were being demoed on Toshiba’s IFA stand. First the introduction of a twin-tuner, so you can record one programme while watching another, or stream one programme to an external device like a tablet or phone. Second, the introduction of a cool new GUI app for tablets and phones that lets you control all the MGR (and other) TV functionality on a second screen, giving much more effective control and letting you browse menus and content archives without disturbing viewing on the main TV.

It’s not confirmed that these features will make it to the U series, but they looked well developed to us…

Three UHD-related features that will thankfully definitely be there are HEVC decoding (for Netflix UHD support), HDMI 2.0 ports, and HDCP 2.2 compatibility.

Design wise the U series prototypes on show look pretty good. Their frames are slim but feel well built, and their stands are striking open-frame metal affairs where the front top edge forms a shiny visible strip below the bezel containing both the Toshiba logo and the TV’s power switch.

Studying the pictures on show from Toshiba’s prototype U series sets proves a reasonably promising experience. Particularly impressive was the upscaling from HD to UHD. This comes courtesy of Toshiba’s CEVO Engine processing system, and it looked excellent in a head to head demo with a standard full HD TV.

Detail levels were clearly much higher post upscaling, with more detail and definition, yet crucially this sense of extra pixel density is achieved while creating practically no noise, be it fizzing, dot crawl, moiré shimmering, or ghosty edges. There’s a tiny bit of blocking at the fringes of some fast-moving objects, but you only really notice this if you’ve got your nose right up to the screen. 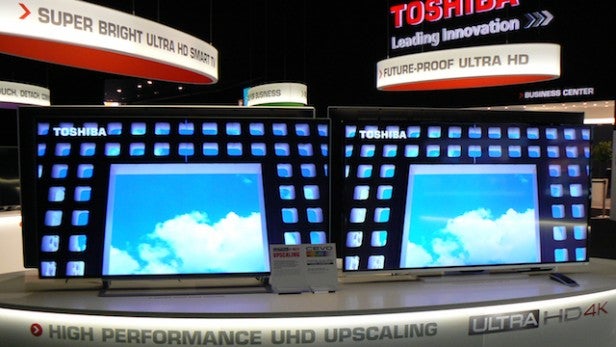 With native UHD sources (Toshiba’s own footage of nature and pretty ladies in this case) pictures don’t look quite as extremely crisp as those of some rival sets. But as well as remembering that these aren’t finished samples, the ever-so-slightly soft look to UHD pictures ties in with an assertion by Nishioka-san that Toshiba is focussed on making an immersive, natural image rather than one obsessed with pushing UHD’s impact to distraction.

Colours look good on the new sets, combining rich saturations with an attractive naturalness of tone, while the sets’ much-vaunted extreme brightness made pictures still look extremely vibrant and impactful even under the harsh lighting of the IFA show floor.

Contrast is harder to judge under show conditions, but it did seem that black levels were more convincing on some models than others. The largest model seemed to deliver much deeper, more stable black levels than the smallest one. Though really the extent of the difference was so pronounced that we’re thinking it says more about the TVs being at a slightly early stage of development than of potential differences between the different sizes of the finished products.

Overall the main feeling we took away from our time with Toshiba’s UHD models was frustration at the fact that what we’d hoped were going to be finished products ready to roll out pre-Christmas are still sketchy with their exact specs and won’t be available until an unspecified date in 2015.

Let’s just hope that when they do finally arrive they deliver on their performance promise while also hitting the sort of low UHD pricing Toshiba readily admits it’s waiting for.