This is the first Toshiba DVD writer to make it into the TrustedReviews lab and it represents a bit of a mixed bag when it comes to features and performance. When Toshiba first told me about the SDR-5372 it boasted the fastest DVD+R DL write speed around at 5x, but in the space of being told about the drive and it actually arriving for review, Asus has come in and stolen the ball with its 6x DRW-1608P.


But, to be fair to Toshiba, the fact that this drive is slightly outgunned in DVD+R DL performance, has not stopped it being the fastest drive I’ve ever seen, taking all the tests into account.

Looking at the specifications of the SDR-5372, shows a drive that’s cutting edge in some areas, but a little behind the pack in others. DVD+/-R discs can be written at 16x, which is up there with the best, while the aforementioned 5x DVD+R DL performance is bettered only by the Asus DRW-1608P. But it’s when we get to the re-writing speeds that this Toshiba looks a bit shaky, with only 4x performance for both DVD+RW and DVD-RW media. CD performance is respectable, with CD-R discs burned at 48x and CD-RW media written at 24x – again, up there with the best.


But before you get put off by the somewhat conservative re-write speeds, you should consider a couple of points. First off, there isn’t any re-writable media faster than 4x right now, and I’ve yet to see a drive that can “overwrite” to existing discs. Of course the faster media will appear eventually, and everyone wants to be as future proof as possible. It’s therefore comforting to know that there is already a firmware flash (TU55) available that will enable the SDR-5372 to write DVD+RW at 8x and DVD-RW at 6x. You can download the new firmware directly from Toshiba by clicking here. 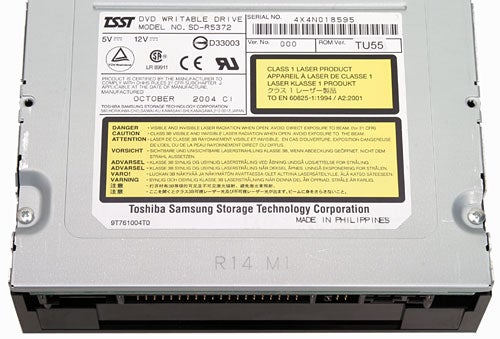 Performance wise this Toshiba drive is no slouch and it excelled pretty much across the board, which is how it managed to beat the Asus DRW-1608P overall, despite the latter drive’s faster dual layer times. Talking of dual layer times, the Toshiba shaved between four and five minutes off the NEC ND-3520A and the LG GSA-4163B, but lagged about three minutes behind the Asus.

Like the Asus, the Toshiba turned in some strange times for DVD+R writing at first, but rerunning the tests a few times saw it turn in times that were consistently as expected. In fact, once it got over its initial hiccup, the SDR-5372 turned in the best set of DVD+R times I’ve seen. DVD-R performance at 16x was also impressive, while the DVD-/+RW results was solid and in line with the competing drives. CD-R performance was up there with the best, but the Toshiba’s game did drop off a bit when it came to CD-RW.

Physically the SDR-5372 looks unremarkable, with a single eject button, an indicator light and a manual eject hole. There’s no headphone socket, volume wheel or CD controls in evidence, but these are getting less common now.


Toshiba sent me a retail box version of the drive, which ships with a pretty generous retail bundle. In the box you’ll find an IDE cable, an audio cable, mounting screws, a blank CD-R disc, a blank DVD+R disc, a paper manual and a CD labelling pen. Software wise, you’re getting Pinnacle Instant CD/DVD and Studio SE – I would have preferred to see Nero, but I guess you can’t have everything. 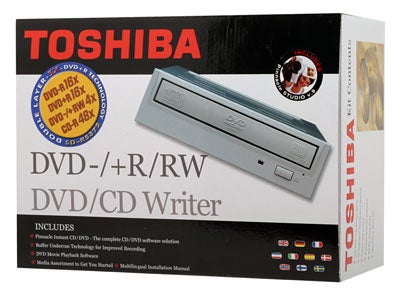 Unfortunately, after spending more time than I would have liked trying to find the retail box version of this drive for sale, I couldn’t find a single retailer stocking it. In fact eBuyer is the only retailer I can find that’s even stocking the bare drive. That said, at a price of £38.19, the bare drive is a bit of a bargain – it is a few pounds more expensive than the NEC ND-3520A when bought as a bare drive, but then the Toshiba does offer faster performance.


So, once again there’s another DVD writer that’s top of the performance tree, and once again it amazes me that you can get cutting edge performance at such a low price. If you’re in the market for a new DVD writer, the Toshiba SDR-5372 is definitely worth considering, just make sure you flash the firmware.


It seems that the DVD writer performance bar just keeps rising, with the first Toshiba drive to appear in the TrustedReviews lab grabbing the crown. No doubt there will be a faster drive appearing any day now, but for the moment, if you’re after a new drive, the SDR-5372 should be high on your list.