Despite the best efforts of Panasonic, the idea of portable Blu-ray players hasn’t really caught on among the industry at large – most brands are quite content to stick with DVD and keep prices at an affordable level. Toshiba is one such company and this year’s offering is the SDP74 – the successor to last year’s impressive SDP73.


What we have here is a highly stylish and very compact portable DVD player that’ll be perfect for keeping the kids quiet at the airport while you wait for the volcanic ash to clear. The built-in screen measures 7in and has a resolution of 480 x 234 pixels, which might not sound like much but from experience a low res screen isn’t necessarily a barrier to enjoyable DVD pictures – particularly among the causal, undiscerning audience at which the SDP74 is aimed. 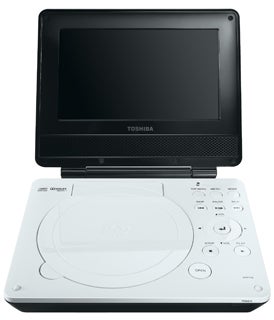 Toshiba takes a conventional approach with the SDP74’s design, using a flip-up lid as opposed to the photo frame style employed by some rivals. This makes it more practical for lap-top viewing and keeps the TFT screen protected when it’s in your bag.


On the outside, the unit sports an instantly eye-catching white gloss finish, contrasted nicely by the black finish on the lower section. Once opened up, we were pleased to find that this white finish also adorns the top of the base section, embedded into which is a round disc tray flap and loads of round, clicky buttons that control menus and disc playback. A more comprehensive array of controls is provided on the supplied remote.


Along the right side of the base is a basic array of sockets. The standout is of course the SD card slot, which can be used to play MP3 and JPEG files from SD or SDHC cards. The lack of DivX support from SD cards is annoying, but its ability to play them from recordable DVDs and CDs is some consolation.


If you want to watch pictures from this unit on your TV then the AV minijack output allows you to do so – albeit in poor, composite quality. You get a minijack to composite/stereo audio cable in the box for this purpose. Despite its ability to decode Dolby Digital, there’s no digital audio output for feeding the bit-stream to an amp, but that’s hardly an essential (or even particularly useful) feature. Last but not least is a pair of headphone sockets, so two sprogs can listen at the same time.

Many portable players often come with separate bulky battery packs, but pleasingly the SDP74’s is built-in, which helps keep the unit light and compact. The battery lasts for around three hours, which is long enough for at least two short kids’ movies.


You get a few accessories in the box, including the aforementioned AV cable, a 12V DC car power adapter and the remote. There’s no carry case and the lack of a headrest bracket means you’ll have to trust the kids not to drop it on the floor. 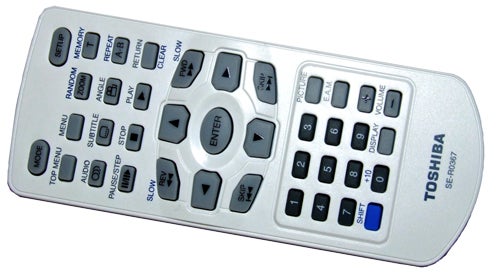 The credit card sized remote controller sports a white finish to match the main unit and its size naturally makes it fiddlier to use than a regular DVD player remote. That said, the prominent placement of the menu controls makes navigation an intuitive process, and although the buttons are tiny at least they’re clearly labelled. The need for a shift key to use some functions is never good.


The setup menu and other displays are expectedly basic – and the use of white text on light blue boxes is dubious – but they are easy to understand. Setup menu scrolling is slow, but there’s a decent range of stuff to adjust, including aspect ratio settings, DivX registration for VOD files and a variety of view modes that fit the displayed image to the screen in different ways.

The Picture button on the remote calls up a range of screen adjustments, including brightness, colour, screen invert, and backlight brightness, which helps you squeeze the longest possible life out of the battery. An Enhanced Audio Mode (EAM) button lets you switch the ‘3D’ mode on and off, but it makes very little difference to the weedy sound that emerges from the speakers.


The display button provides a handy summary of the disc being played – time, chapter, selected audio track, bit-rate, and so on. There are four different search speeds, as well as four slow motion speeds (activated by holding down the search key). There’s also a three-stage zoom that lets you explore the picture more closely.

Digital media from card or disc is displayed in neat folders, and although it’s sluggish to respond you can find files quite easily. They’re listed on the left while a list of options and JPEG preview box is shown on the right. On the downside JPEG files look overtly soft and blocky on the low-res screen, which makes the feature fairly pointless.


DivX files load up immediately and the 7in screen is perfectly suited to this file format as it helps to mask the blurring and block noise in poorly encoded files. We also listened to a few MP3 files through a high quality pair of headphones and the sound quality is very impressive. There’s a lovely balance across the frequency range, with perky treble and a healthy dose of bass. The SDP74 won’t play WMA files.


However, the SDP74S was primarily conceived for DVD playback and despite its obvious limitations it does a great job with movies. After loading up Avatar, and tweaking the screen settings to make it less murky, we were very pleased by how bright and vibrant the picture looks. It allows you to appreciate the movie’s stunning CGI, from the dazzling blue skin tones of the Na’vi to Pandora’s vivid landscapes. 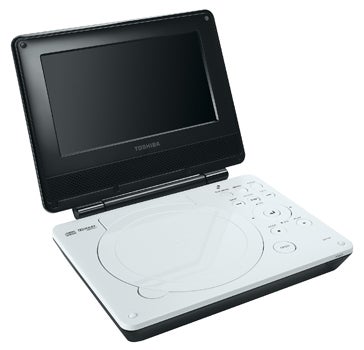 But as well as delivering these forceful colours, the SDP74S also renders more natural elements of the picture, such as human skin and spacecraft interiors, with a convincing, well-balanced tone. The night-time scenes on Pandora are surprisingly well contrasted, allowing blacks within blacks and shadow detail to remain visible. The screen also boasts a wide viewing angle, and therefore remains watchable even when you’re not straight on to the screen.


However, the low pixel count causes banding on background walls and leaves edges looking soft and jagged. You can also see a hazy, shimmering chicken wire effect that lessens the impact of the movie’s intricate CG detail, but these are par for the course with a 7in screen and probably will go unnoticed by young viewers. If you don’t analyse it too deeply, the SDP74 delivers very enjoyable images and at this price you can’t really ask for better than that.

Although there’s nothing particularly new or original about the SDP74, and its low screen resolution causes a few problems, it’s certainly a likeable portable DVD deck. It offers bright, colourful movie playback, a stylish design and (limited) digital media playback via SD card, but the best part is the price. At well under £100 means the SDP74 is a relatively affordable way to keep the kids amused.