After being thoroughly disappointed by the detail-boosting XD-E500, the player charged with filling the HD DVD-shaped hole in Toshiba’s range, we now turn our attention to the next player in the pecking order.


The SD-580E may lack the eXtended Detail Enhancement found in the XD-E500 but it does upscale DVDs to 1080p, 1080i and 720p, which should still make it an attractive proposition to hi-def TV owners looking to make the most of their DVD collections – and at less than £60 online, it could be a cost-effective way of doing so.

Inevitably, the low price tag has taken its toll on the deck’s build quality. It’s painfully light, sounds hollow and the fascia feels plasticky to the touch – in other words, exactly what you’d expect from a budget DVD deck. Thankfully, Toshiba has masterfully disguised its physical shortcomings with sleek, sexy black styling and wafer-thin dimensions, which perfectly compliment Toshiba’s Regza LCD TVs.


The fascia is kept nice and tidy thanks to a minimal amount of buttons, but the disappointing LED display panel is reduced to four digits, which can only show the current chapter. There’s also a separate light showing the current HDMI output resolution, but the main attraction on the front panel is the USB port, a feature not found on any other DVD player in Toshiba’s range (including the XD-E500). It can be used to play back MP3, DivX and JPEG files and cuts out the hassle of burning your content onto disc before you can play it. But you can still play these files from disc if you wish – the unit accepts every format except DVD-RAM.

Rear connections are the same as the SD-480E and include HDMI, component, composite and SCART outputs (the latter thankfully offering RGB), while on the audio side you’ll find coaxial digital and analogue stereo outputs. It’s a modest selection, but one that should suffice for most systems.


Other features include Enhanced Picture Mode (EPM), which enables you to adjust the picture’s brightness and contrast levels, and Enhanced Audio Mode, which generates virtual surround when using two speakers. You’ll also find a range of other exotic features such as a zoom mode, a Night mode for after-hours viewing and all the usual trickplay modes.

Controlling the unit is a piece of cake thanks to the agreeable remote. The core playback and menu navigation controls are laid out in a logical manner and everything else is clearly labelled, although the group of similar-looking buttons at the bottom is a bit cluttered.


The user interface is visually unremarkable but easy to follow and satisfyingly responsive. The setup menu is a big blue box with ZX Spectrum quality graphics down the side and there are no further picture adjustments to play with, although this simplicity will probably be a blessing in disguise for the deck’s target audience. You do get the usual aspect ratio, HDMI resolution and DivX settings though, plus a choice of bitstream or PCM from the digital output. 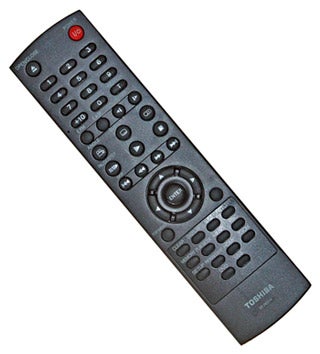 Despite showing the occasional sign of its budget DNA, the SD-580E generally delivers solid, enjoyable pictures for the money – as demonstrated by its handling of ”Apocalypto’s” sumptuous visuals. Upscaling the movie to 1080p draws plenty of detail out of the forest surroundings, such as tree bark and the strands of straw on the village huts, and much of this detail is retained in dark scenes – for example, there’s a reasonable amount of texture on the walls inside the hole where Jaguar Paw’s wife and son are trapped.


Excellent contrast and colour reproduction make the image look deep and vibrant, not pale or pasty. The verdant hues of the forest trees and bushes are delivered in lush, believable shades of green, while the bronzed skin of the Mayan tribesmen boasts fantastic richness and tonal fidelity. Other plus points include smooth motion tracking and well-defined edges with no evidence of over-zealous video sharpening.

However, the deck can’t hide some smudgy video noise, clearly visible as the camera pans up to the sky or fixes on large, clear patches of colour. You can also make out some mosquito noise around certain edges, which becomes particularly bothersome when viewed on a large-screen TV.


When you feed the deck something a bit more challenging, further cracks start to appear. The Silicon Optix HQV Benchmark test DVD highlights flaws that aren’t immediately apparent with movie fare – it fails the jaggies test miserably, with the rotating bars flickering and shuddering uncomfortably when they reach even the shallowest angle. But strangely it copes admirably with the tricky flapping flag video clip, showing no real signs of jaggies along the edges of the flag’s red stripes.


The disc also reveals poor fine detail retrieval, making the small bricks on the sides of the buildings during the detail test clips look soft and indistinct – and it’s not helped by more of that twitchy video noise that makes the image seem unstable. We’ve seen better performance from budget rivals like the Onkyo DV-SP406 and the Samsung DVD-F1080.

If you’re using the HDMI or coaxial digital output to pipe multichannel Dolby Digital or DTS audio to your AV receiver, then the results sound fantastic provided your system’s up to scratch. But if you’re limited to your TV speakers or a hi-fi, then rest assured that the two-channel analogue stereo, HDMI and SCART outputs do a great job of conveying the sonic essentials clearly with dialogue and effects sounding crisp and dynamic.

We ran through a range of digital media files and DivX, MP3 and JPEG played back with no issues, but its refusal to play our WMA files is a pity. CD playback lacks audiophile sparkle but remains enjoyable, making this a decent all-rounder.


OK, so its picture and build quality leave a lot to be desired from a videophile perspective, but those with less demanding tastes will still find a lot to like about the SD-580E – it’s easy to use, offers HDMI and USB ports, looks really snazzy and most importantly it’s yours for under £60.


Large high-end TVs will expose its shortcomings but let’s face it, if you’re fussy about picture quality you probably won’t be looking at budget players anyway. On a modestly-sized screen you won’t have any major complaints, making it an ideal deck for day-to-day DVD viewing.