Hooking up the sub and external devices is easy, and the ability to plonk the light, compact soundbar wherever you like is a godsend.

You can control the SBM1W from the comfort of your sofa with the slim credit card style remote. Its horrible blister buttons make it awkward to use, but at least there are buttons for all the key features, such as presets, volume, input, mute and 3D sound. 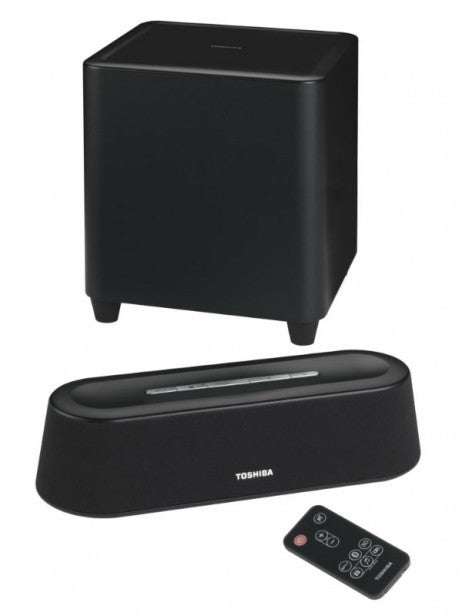 Operation is also a little rudimentary. There’s no way of knowing what input is selected, so you have to toggle through them all until the source you want starts playing. Also, there are no manual subwoofer level or EQ controls, so if you’re not happy with how it sounds out the box, well, you’re stuck with it. Similarly there’s no way of knowing whether Absolute 3D is on or off.

We tried pairing the SBM1W with our Bluetooth-capable iPod Nano 7th generation, which initially refused to find the soundbar from the other side of the room. However after putting the iPod right next to the Toshiba the two paired instantly and continued working when we moved back – worth remembering if you have similar trouble.

When setting up the SBM1W to work with a Blu-ray or DVD player, it will only accept PCM through the optical and coaxial digital inputs. If your player is set to ‘bitstream’ output you won’t hear anything as there are no Dolby Digital or DTS decoders on board.

The SBM1W delivers pleasing sound quality out the box. We started with music from an iPod Nano via Bluetooth and the sound is rich and robust, with the sub’s bass tones lending a pleasing sense of depth. The bass level could do with being trimmed by a couple of decibels but it doesn’t overpower the soundbar too much.

The soundbar also draws out a reasonable amount of high-frequency detail, giving the sound an open feel, filled out by forthright mids that allow vocals to come through loud and clear. It isn’t exactly refined though, missing the detailed insight and silkiness of the best soundbars, but for a £150 product it does a decent job. 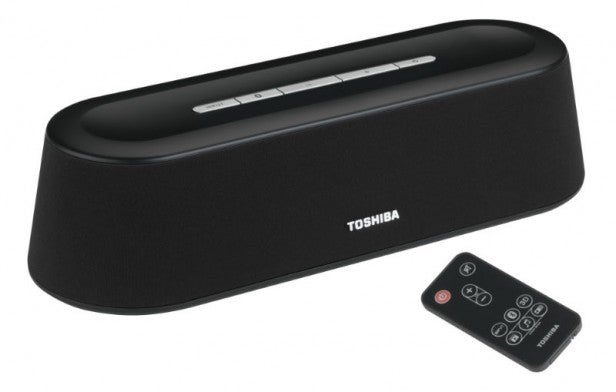 Switching to movie playback – in this case the finale of Avengers Assemble fed digitally from a Samsung Blu-ray deck – it’s actually much more powerful than you might expect. There’s a voluminous rumble when the Chitauri ships sail past the camera, while the dramatic score sounds punchy and urgent. In fact, the big, enveloping sound it musters seems at odds with its diminutive dimensions, and for that Toshiba deserves a great deal of credit.

Bass is nicely integrated, dialogue is generally clear and treble is crisp. However, you sense at times that the SBM1W is punching above its weight. When playing this chaotic scene at a high volume, it strains when presented with challenging sounds, like the spacecraft’s bellowing roar as Thor frazzles it with lightning, or the Hulk bashing Loki from side to side in Stark Tower. The coarse, sharp edge to these sounds is a reminder that this is, at the end of the day, a budget sound system.

We’re also a little confused as to what role Absolute 3D plays in all this. Pressing the ‘3D’ button during playback appeared to make only a minor difference to the sound, but luckily the soundfield is engulfing in both settings, so it’s not a big deal.

The idea of offering big home cinema sound from a small box is appealing, and in most areas Toshiba executes it brilliantly – the soundbar itself is stylish and compact, with similar dimensions to an iPod speaker or clock radio, making it easy to squeeze into tight spaces.

What’s more the inclusion of Bluetooth is hugely convenient for playing music from phones and iPods, while the generous range of sockets means that all your other devices are covered.

And in terms of performance, the power it musters is remarkable given the unit’s diminutive dimensions, offering an entertaining and absorbing sound. Sadly with that power comes a roughness round the edges that reflects its budget price point.

It’s also a shame that the sub isn’t wireless and its operating system is rudimentary. But for £150, a lot of people will still be impressed by what the SBM1W has to offer.