What is the Toshiba Satellite U940?

With all of the uncertainty
and upheaval that Windows 8 has brought to the PC industry, it’s good
to see capable traditionally styled Ultrabooks, like the Toshiba
Satellite U940, hitting the market with an enticing mix of price and
performance.


Expensive touch-enabled hybrids are all very well, but we suspect it
will take decent, flexible mid-rangers such as this and the Dell
Inspiron 14z to get the masses upgrading.

Toshiba Satellite U940 – Design and Build

The Satellite U940
doesn’t buck Toshiba’s reputation for solid-but-plasticky laptop design,
but it does display a couple of attractive and fairly distinctive
flourishes here and there.


Ostensibly the company has taken a familiar square slab approach, though
the U940 comes in a kind of gun-metal blue with a novel dimpled texture
on the external surface of the screen.


The keyboard portion of the laptop is smoother (other than a slightly
raised wrist rest that shares the external cover’s dimpled finish) and
squarer, with MacBook-like sharp edges. On the left hand side there’s a
pleasingly purposeful-looking vent, which means that most of the ports
have been shunted to the right. 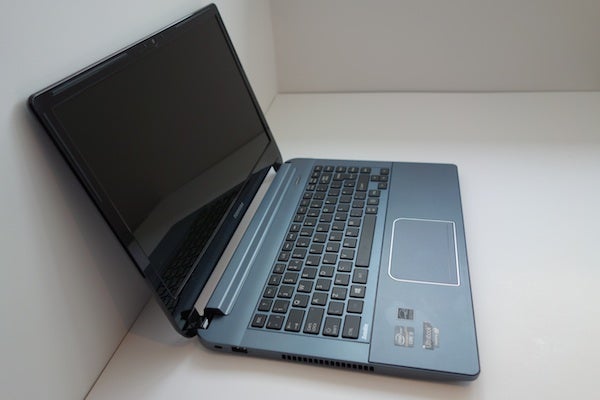 Another striking design touch is the way the display is mounted. The
twin rear-mounted hinges leave a slightly unsightly bulge where the
battery section protrudes above the level of keyboard, but we like how
there’s a large gap in between the hinges to allow the display to fit
snugly over this hump.


Despite all the plastic on display, the U940 appears to be relatively
hefty at 1.79kg, but that’s probably because we’re comparing it to the
13-inch Ultrabooks we’re more used to. Compared to a more direct rival
like the Dell Inspiron 14z, it’s comfortably lighter – though that’s
partly due to the omission of a CD drive.


The Toshiba Satellite U940 is reasonably solid, but it’s not without a
little creak and flex when a little pressure is applied to the keyboard.

As we’ve come to expect
from modern Ultrabooks, all of the Toshiba Satellite U940’s ports are
within easy reach on the sides of the device. Unfortunately, as we’ve
already mentioned, the bulk of them have been bunched together on one
particular side. 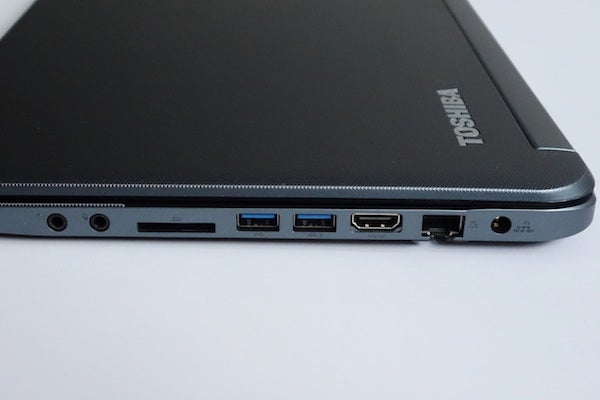 That’s two USB 3.0 ports (with Sleep and Charge capability), an Ethernet
port, a power slot, audio out, mic input, HDMI and SD card slot all
grouped together. This leaves just a USB 2.0 slot on the left, alongside
a Kensington lock.


Having all these connections so close together can be problematic,
particularly if you’re right handed and used to working with a mouse.
All you need is to have a power cable, a printer, and a set of
headphones plugged in and there’s a fair chance your mouse hand will be
impeded. 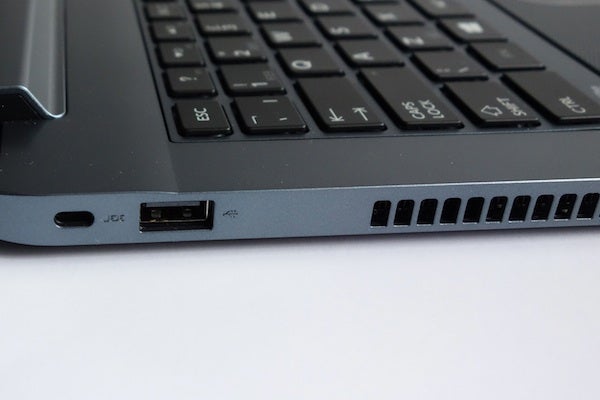 Aside from the physical connections, the Toshiba Satellite U940 comes
with the expected raft of modern wireless connection standards. That
means 802.11 b/g/n WLAN, Bluetooth 4.0, and WiDi.

The Toshiba Satellite U940 features a 14-inch, 1366 x 768 LED display. This isn’t the Full HD 1080p standard we’ve come to expect from high-end Ultrabooks and larger laptops, but then the U940 isn’t a high-end laptop.

Nor does this screen take advantage of Windows 8’s touch-oriented interface – put your fingers on this display and all you’ll get is a mucky smudge for your efforts. 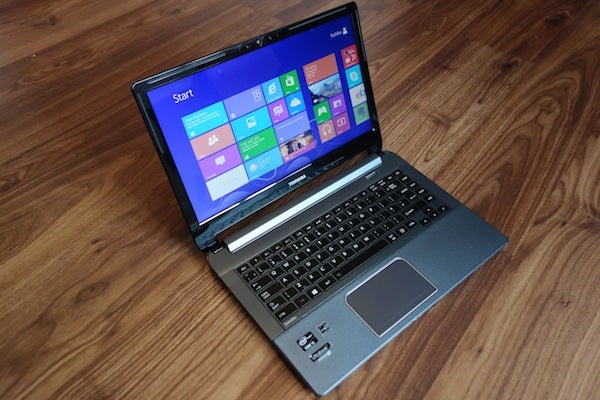 The image itself remains crisp and clear whether you’re watching a film or navigating Windows 8’s bold primary-colour front-end, but colours appear washed out and viewing angles aren’t very good at all. This can be attributed to the U940’s use of cheaper TN screen technology rather than the crisp IPS panels of more expensive Ultrabooks.

Still, it does the job adequately, and is just about acceptable for the price. Watching a 1080p trailer of Tom Cruise vehicle Oblivion, the U940’s screen coped well, picking out the fine detail and the numerous shades of grey and white that make up Joseph Kosinski’s post-apocalyptic sci-fi world.

The Toshiba Satellite U940 will display everything you throw at it capably, then, rather than brilliantly.

Used as our main laptop for the review period
Tested for at least a week
Used consistent benchmarks for fair comparisons with other laptops
Reviewed using respected industry benchmarks and real world use
Next
Toshiba Satellite U940 – Keyboard, speakers and camera Review