With the advent of Intel’s new Sandy Bridge Core i processors, most
manufacturers have updated their desktop PC and laptop ranges with new models,
and Toshiba is no exception. Today we’re looking at the first of these, the
entertainment-oriented, 15.6in Satellite P750-115. Sporting a new textured
finish, high-end quad-core Core i7 processor, a whopping 8GB of RAM backed by a
640GB hard drive and Nvidia GeForce graphics with 2GB of dedicated RAM as well
as a Blu-ray drive, this is clearly a serious contender. The best bit is that
it costs under £1,000, so is it worth its asking price? 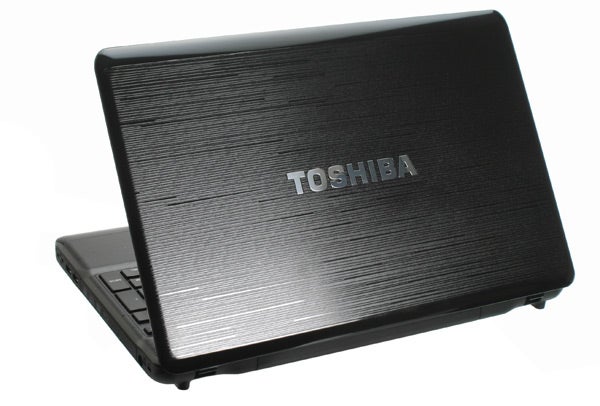 First let’s take a look at the design, which has altered
radically from previous Satellite incarnations. Though Toshiba had already
moved away from all-gloss fingerprint magnets such as its Satellite L650 with the lightly textured Satellite A660, this time around the imprint is far more defined. It’s a
bamboo-like pattern that adorns most of the lid and inside, leaving just a
glossy black lip at the front.

While it’s not the most attractive pattern we’ve seen and
isn’t a patch on the organic swirls we last encountered on the HP tm2, it’s still far preferable to a plain glossy lid that shows off dust
and fingerprints like nobody’s business. 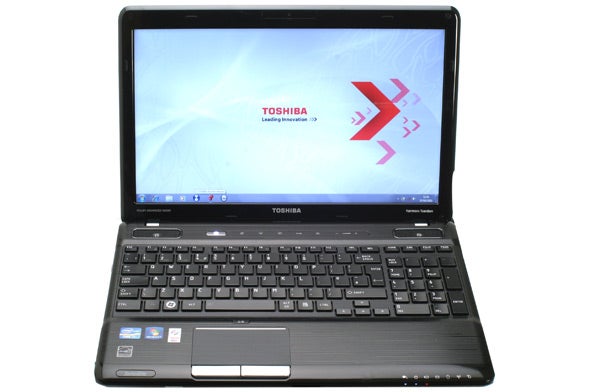 Unfortunately, on the laptop’s inside that glossy lip is
positioned so that it’s impossible to avoid palm-prints, and the keyboard’s
glossy finish and touchpad’s chromed buttons will also require regular wiping.
However, the Satellite P750 does look quite attractive overall, and the Satellite’s
chromed, white-backlit power button is a nice touch. White status LEDs are
visible at the laptop’s front even when the machine is closed.

Build quality is good overall, though there’s a little more
flex than we would ideally like above the keyboard. Though it’s reasonably
quiet in light use, when under load the P750-115 does produce an audible hum,
though that’s not too surprising considering its high-end (and therefore hot) internals.

Connectivity is about what you would expect for a high-end
laptop these days. Along the left there are HDMI and VGA for video, a Gigabit
Ethernet port for wired networking, and two USB ports, of the 3.0 and 2.0
varieties, with the former supporting Sleep & Charge to power or charge
devices while the laptop is turned off. 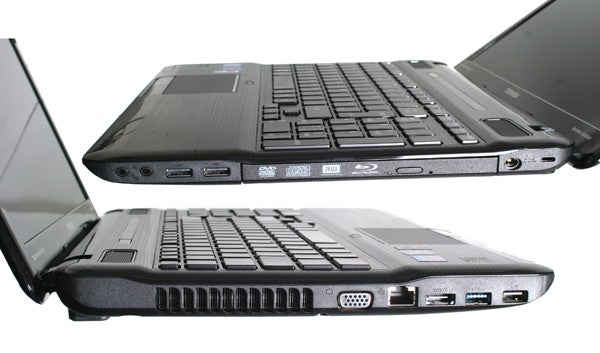 On the front we have an SDXC/MMC/xD/MS Pro card reader,
while to the right you’ll find a further two USB 2.0 ports, the tray-loading
Blu-ray drive and headphone/digital-audio-out plus microphone jacks. The mic
output supports Toshiba’s unique Sleep & Music functionality, which we
first came across on the NB520. This allows you to use the laptop’s speakers with an external source
(like an MP3 player) connected through a 3.5mm jack while the laptop is powered
down – for more details, check out page three of our NB520 review.

Finally, the laptop’s wireless connections are
comprehensively covered by Wi-Fi N and Bluetooth 3.0. Our only quibble is that
we would really have liked to have seen two USB 3.0 ports rather than just one,
as this would allow fast data copying between two speedy external drives or
memory sticks.

Specifications are where things get really interesting, as
the Satellite P750-115’s relatively unassuming exterior hides some serious
horsepower. Star of the show is one of Intel’s new Sandy Bridge
chips, specifically the quad-core Core i7-2630QM. With support for
hyper-threading enabling up to eight virtual cores and a maximum Turbo
Frequency of 2.9GHz over its standard running speed of 2GHz, it’s at the high
end of the mobile processor range and should give plenty of power for intensive
tasks like video trans/encoding.

(centre)Though Toshiba’s Satellite and the Samsung RF711 both use the same processor and the Satellite has double the
memory, the RF711 wins out due to its twin hard drives in RAID.(/centre)

This capable processor is backed by a whopping 8GB of DDR3
RAM, which is quickly becoming the standard on high-end PCs. For storage
there’s a generous 640GB hard drive, though it’s of the slower 5,400rpm
variety.

One of the nicest surprises is the graphics card, which is
an Nvidia GT540 with a whopping 2GB of its own memory. Unfortunately, the
amount of memory doesn’t have a significant impact if the chip itself isn’t up
to scratch, but thankfully, if you’re not planning to run demanding titles like
Crysis, the GT450 holds up fine.

In Stalker, it managed a smooth 41.1 frames per
second (fps) at maximum detail in DirectX 11 mode, and at our standard 720p
test resolution returned just over 47fps. As such, it’s fair to classify the Satellite
P750-115 as a ‘lite’ gaming laptop. 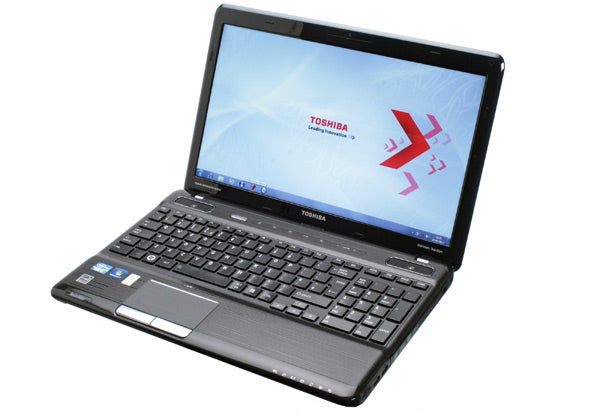 Together with its Blu-ray drive, the GT540 allows for 3D
movie playback and 2D upconversion – if you have the requisite screen and
glasses to enjoy the experience. Toshiba’s proprietary Resolution system will
make sure standard definition material is upscaled nicely.

Nvidia’s Optimus ensures you don’t pay a battery-life penalty
for the discrete graphics when they’re not needed, as in such cases the system
falls back on Intel’s weak but frugal integrated graphics. 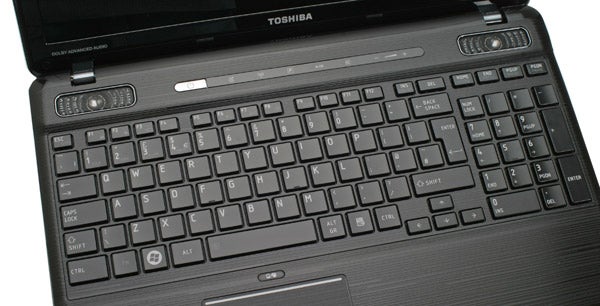 When it comes to usability, the Satellite P750 comes out
reasonably well, but it’s not a clean win. Apart from its glossiness, the
isolation keyboard offers large keys that are well-spaced. Key travel is good, but
unfortunately feedback is too light, occasionally leaving you unsure if you’ve
actually pressed a key or not. You do get used to this lighter response, but we
would rather type on the HP Envy 14 Beats Edition.

A strip of touch-sensitive controls above the keyboard gives access to shortcuts as well as media, wireless and volume controls. These were responsive in our testing, and light up in white when activated, a nice visual touch.

The large, sensitive touchpad offers a pleasant matt surface and naturally supports multi-touch. However, while its buttons give a nice click, their action is slightly too stiff for comfort.

Based on past experience with the Harman Kardon speakers in Toshiba
machines (laptops such as the Satellite A660 and even netbooks like the NB550), it’s a pretty safe assumption that the audio quality on this Satellite
P750 will be decent – and as it turns out, that is indeed the case. While
it’s certainly not the best-sounding laptop we’ve heard from the company, its
stereo speakers produce plenty of volume, clarity and depth, accompanied by
more bass than many rivals. As portable audio experiences go this Satellite is
pretty good, and headphones are not required.

Unfortunately we can’t predict good things about the 15.6in,
1,366 x 768 screen, so let’s see how it holds up. First off, there’s a major
positive, in that Toshiba has resisted applying any kind of glossy coating.
This makes the display a pleasure to work with even in bright environments,
with nary a reflection on the horizon (or the screen).

However, upon assessing the quality of the actual panel, we
were sorely disappointed. Naturally we weren’t expecting anything on a level
with the Lenovo X1‘s beautiful IPS screen, but the Samsung Series 9 has shown how good TN-based laptop panels can be.
Unfortunately, the performance of this Satellite is actually below average. 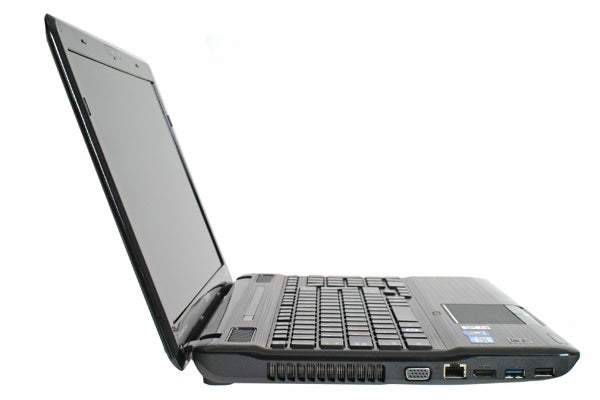 First there are the viewing angles, which are abysmal
vertically but also don’t hold up too well horizontally, with some contrast and
colour shift creeping in. Contrast is likewise poor, and this is the first
laptop screen we’ve seen in quite some time that fails to differentiate between
three of the darkest greyshades, meaning you’ll potentially lose out on significant
dark detailing in movies and games. Even at the lowest brightness settings,
blacks are never truly black, lending things a somewhat washed-out look. Nor
does this bring any benefit to lighter shades, which are even less
distinguishable. There’s some significant banding over darker shades, too.

Back to positives, backlighting is even and there’s no
visible bleed, while sharpness is excellent. In fact, the screen would be fine
if this were a business machine intended for productivity. As an entertainment
laptop, however, its screen’s characteristics are far from ideal.

Last but not least, how long will this Toshiba last you away
from a socket? Battery life from the 48Wh unit
supplied with the laptop was actually very decent considering the power-hungry
quad-core CPU, with it managing three hours and 22 minutes in our non-intensive
Productivity test, with screen brightness set to 40 percent.

Unfortunately, the laptop’s sub-par screen puts a bit of a
dent in the P750-115’s value proposition compared to similarly priced
competitors. Getting a fast Core i7 quad-core CPU, 8GB of RAM, a 640GB hard
drive, Nvidia GT540M graphics and a Blu-ray drive for under £1,000 is otherwise
a decent deal, especially since it’s all built into a fairly sturdy chassis
with good ergonomics and great speakers. 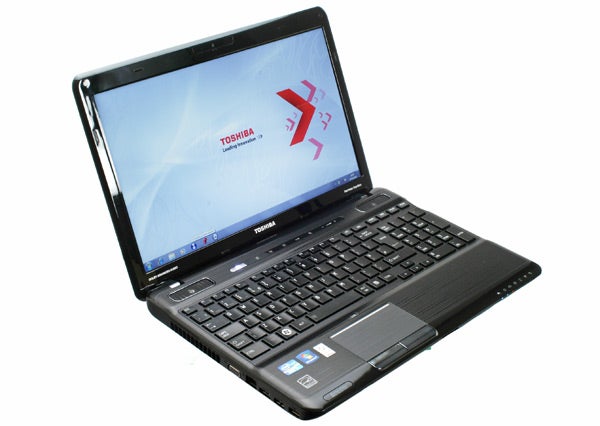 However, for just £10 more you can get a Sandy Bridge
version of the Dell XPS 15, which offers exactly the same specifications but includes a
brushed aluminium lid, better connectivity, runs quieter, is more configurable
and – above all – has a better screen.

If you’re looking for something a little easier on the
wallet, don’t mind a machine that’s less portable and don’t need all that RAM, the
RF711 is also a strong contender. Specifications are similar though the system
and graphics memory are halved, but you do get a faster, larger RAID hard drive
array with a capacity of 1TB, as well as a larger, better, higher-resolution
17.3in screen, all for £180 less.

A well-built multimedia and gaming laptop with good
specifications, comfortable ergonomics and impressive speakers, Toshiba’s
Satellite P750-115 is really let down by its poor screen. Because of this there
are better options available at its price point, though for those mainly using
external displays it’s still well worth considering.