As laptops slowly take over from desktops, ‘desktop replacements’ are becoming ever more popular. These big, heavy laptops have large screens, powerful sound systems, and a general tendency towards packing in every multimedia and entertainment feature possible. The largest of these to be found at the moment generally come in at 18.4 inches, as does Toshiba’s Satellite P500-12D which we’re looking at today. 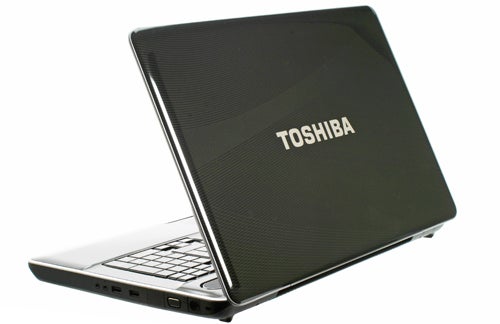 Toshiba has a unique design ethic when it comes to laptops, of which the most distinctive traits are the glossy overall finish and pinstripe pattern. The latter has had a major overhaul from the boring, symmetrical stripes found on the previous Toshiba 18.4in machine we reviewed (the Qosmio G50) and is now a pleasing mixture of swooping lines. Unfortunately this pattern doesn’t prevent fingerprints from being horribly obvious on the glossy lid, but then that’s a criticism that can be levelled at most consumer laptops. 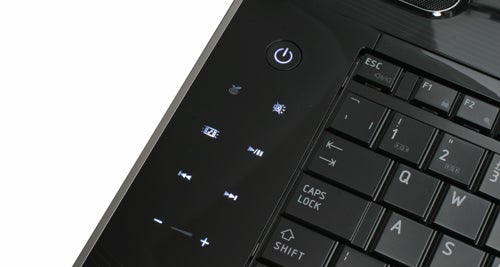 Rather than the design it’s the sheer size of this behemoth that will likely impress you most though. At 41.5mm thick and with a weight of 3.93kg this is one laptop that pushes the boundaries of mobility.


Opening the machine up we’re greeted by Toshiba’s usual disappointingly glossy interior, with everything from the wrist rest to the semi-gloss keyboard being a magnet for dust, grime and fingerprints. Mind you, aside from the constant cleaning required to maintain it, the overall look is attractive. 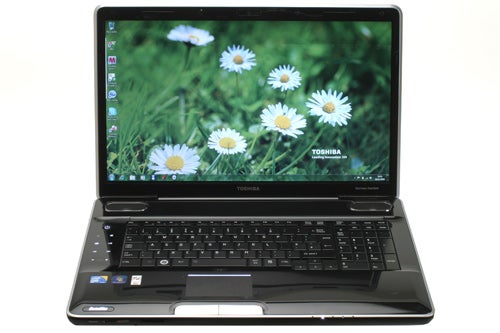 Above the keyboard reside the impressive-looking speakers (we’ll get to their performance in a bit), whose chrome surrounds match the touchpad’s chromed buttons nicely. Thanks to the P500-12D’s generous dimensions Toshiba has found plenty of room to integrate the power button and a set of touch-sensitive controls to the left of the keyboard. First off we have an Eco-mode button, which as you might have guessed reduces power consumption. Next up are media and volume controls, all of which are responsive and offer a loud beep when pressed, though thankfully this can be turned off. They’re all nicely backlit in white, as is the power button, Satellite logo and small strip above the touchpad (though sadly the keyboard isn’t) – very handy for finding them in the dark.

As usual on Toshiba laptops, the keyboard is rather good. It’s a shallow, low-profile tile-style affair that looks great (at least initially). Again the roomy chassis has allowed for an excellent layout with plenty of dedicated function buttons, and of course there’s a full number pad on hand as well. 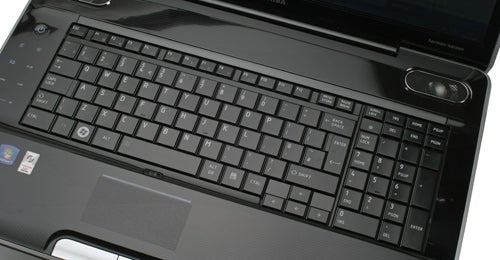 Though the keys’ slightly shiny surface makes them feel slippery, their large area means you’ll seldom slide off a key. Feedback is also good, despite being shallow, as keys return a solid click when pressed. In fact, the only criticism we have is that there is just a hint of flex, but you probably won’t even notice unless you learned to type on an old-fashioned typewriter.


Just below the keyboard is a recessed button which turns the touchpad on or off, indicated by the backlit strip which illuminates when the touchpad is active. To be honest we didn’t find the touchpad interfered with typing at all so felt no need to turn it off, but it’s nice to have the option all the same. 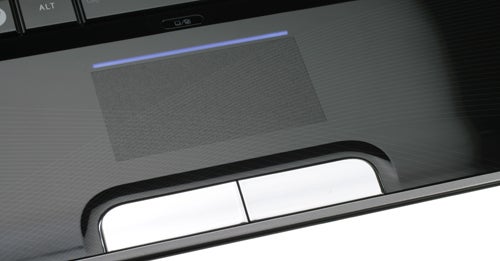 The sensitive multi-touch touchpad itself looks tiny, but at nine centimetres wide it’s in fact larger than those found on many laptops – it’s just dwarfed by the sheer size of its surroundings. It’s the only visible part of the laptop that’s truly matt and is also slightly textured, making it very pleasant to use. Aside from their chrome finish the pad’s buttons are ideal, being large, well-positioned and offering light, crisp feedback.


On a laptop as obviously focused on entertainment as this one, connectivity should be good and indeed Toshiba doesn’t disappoint. On the left we have Gigabit Ethernet, one standard USB and one combined eSATA port, mini FireWire and HDMI video out, as well as a 54mm ExpressCard slot and the DVD optical drive. Now that Toshiba is finally on-board with Blu-ray, it’s interesting to note that the model up from the P500-12D we have (the P500-12F) is the first Toshiba laptop to offer a Blu-ray drive.

Towards the front of the Satellite P500-12D you’ll find an IR receiver, physical wireless switch and memory card reader which takes all the usual formats. Finally, to the right we have the power input, VGA output, two further USB ports (all USB ports on the P500-12D feature Sleep & Charge for charging your devices while the laptop is unplugged) and 3.5mm jacks for headphone and microphone, the former of which doubles as a digital output.

Naturally the most dominant feature of this laptop is its reflective 16:9 aspect, 18.4in screen. Unfortunately it doesn’t sport a Full HD resolution, going for 1,680 x 945 instead. To be fair this is common at this screen size, 1080p video didn’t look any worse for it in terms of sharpness, and this resolution does give you quite a bit more desktop real estate than the usual 1,366 x 768 found on many 16 and 17in machines.


As already mentioned sharpness is excellent, complemented by bright but natural colours, no sign of backlight bleed or banding (the latter of which is quite impressive for an affordable TN panel this size) and decent tonal performance that sacrifices differentiation at the bright end of the scale to give above-average dark detail – the ideal compromise for films and games. 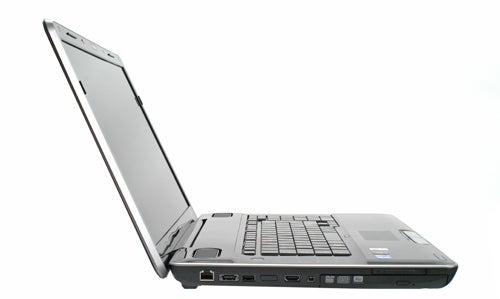 Unfortunately, this generally good performance is marred by that ever-present TN bugbear of contrast shift and poor viewing angles. To get the most out of dark scenes especially, you need to have the screen tilted just right and sit fairly centrally. Overall though, it delivers an impressive experience.


Thankfully, the Satellite P500-12D does nothing to detract from the range’s well-deserved audio reputation. As we’ve come to expect from the partnership of Harman/kardon and Toshiba, the speakers lend themselves to a superlative audio performance. Trebles are produced with subtle clarity, bass rumbles out of the speakers with more oomph than it has any right to from such small enclosures and at no point do they loose out on warm, rich detail.


Best of all, this relative finesse and fidelity is delivered at volume levels most laptop speakers can only dream of. The only others that come close to this level of audio performance are those found in the Satellite’s smaller siblings. 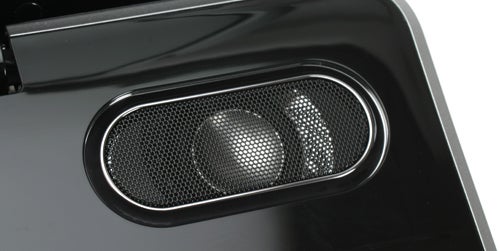 Now it’s time to find out what’s taking up space in the monumentally thick chassis. Well, there’s no Core i7, which is not too surprising considering the sub-£800 price tag. Instead processing duties are handled by an Intel Core 2 Duo P7450 running at 2.13GHz, which should be more than fast enough to deal with the daily needs of the average consumer. Only in CPU-intensive scenarios such as video encoding will you even notice the difference. 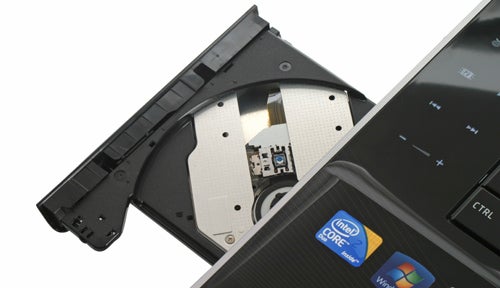 We also find the de facto 4GB of DDR2 RAM which Windows 7 Home Premium will use to full advantage, and there’s plenty of storage space to go around with a 500GB hard drive spinning at 5,400rpm. A great addition is Toshiba’s HDD 3D Impact Sensor that parks the drive heads whenever it detects heavy vibration or sudden movements, hopefully preventing damage to your precious data. This feature worked surprisingly well during our test time; once it even activated when I merely pulled out the laptop’s power plug. If that’s a bit too sensitive for your taste though, you can adjust the sensitivity or even turn the feature off altogether under Toshiba’s HDD Protection application.


Another noteworthy feature is the webcam, as it’s an HD model that supports 1,280 x 800. Despite the resulting video being somewhat noisy, it’s a huge improvement on most laptop webcams. It’s just a shame Toshiba has opted to omit Bluetooth, though you do still get the far from optional Wireless-N Wi-Fi and Gigabit Ethernet to service your networking needs.

One of the highlights of this machine is its nVidia GeForce GT 230M discrete graphics card. While it does have a negative effect on battery life, this is hardly much of a concern on a machine that’s not very portable to begin with. Performance, on the other hand, is just about good enough to run some modern games at low detail settings. In TrackMania Nations Forever the Satellite P500-12D returned a silky-smooth 76.9fps at 1,366 x 768 (or 64.4fps at the screen’s native 1,680 x 945 resolution), while even Stalker was playable at minimal detail settings. Of course you also get the benefit of PureVideo video processing over Intel’s integrated graphics options. 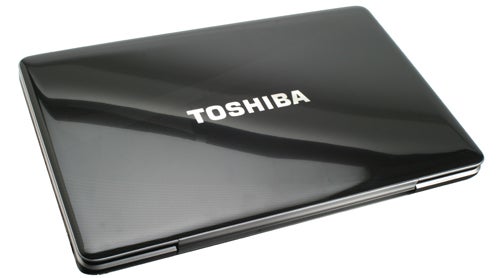 Though arguably battery life is never going to be more than an afterthought on a laptop this large, the P500-12D put in a surprisingly good score of two hours and six minutes in MobileMark’s Productivity benchmark (with screen brightness at a very usable 40 per cent). Unfortunately the DVD test refused to run, but seeing as less intensive use allows for two hours battery life, watching films on battery seems an unlikely event.


Finally on the value front the £750 P500-12D also does quite well, though it doesn’t truly stand out. For example, you can get a similarly-configured Acer Aspire for the same price, while the Dell Studio 17 offers a Core i7 processor for as little as £780 – albeit with a graphics card you won’t be able to game on and more than likely integrated speakers that won’t shine a candle to Toshiba’s. As such, given the features on offer, the P500 comes out pretty well.


With decent build quality, a good keyboard and touchpad, usable screen and the best speakers on any laptop we’ve tested (plus relatively good battery life to boot), the Satellite P500-12D’s ill-advised glossy insides and lack of a Blu-ray drive are forgivable, especially considering the reasonable price. If you want a desktop replacement for light gaming and entertainment, it’s definitely worth considering.

(centre)This is also a good, though not outstanding, gaming machine that will cope with most modern titles with a modicum of compromise.(/centre)

(centre)For such a large laptop, just over two hours of use if pretty good. You’re unlikely to need more.(/centre)