It’s a testament to the improvements in mobile computing technology that the very concept of the Desktop Replacement (DTR) even exists. Although desktops will always provide better performance related to price, the fact remains that for a good while now it has been possible to get hold of larger notebooks, which fulfil the needs of most users at a price that isn’t prohibitive.


This Toshiba Satellite P200-143 is a good example. Retailing for one pound sterling short of a £1,000 you get a large 17in display, a capacious 200GB hard drive and a roomy keyboard that includes a ten digit number pad. This ticks most of the boxes of the DTR feature set, and ought’ to set it on course for bountiful praise. Unfortunately, this particular model is a halfway house between nowhere. 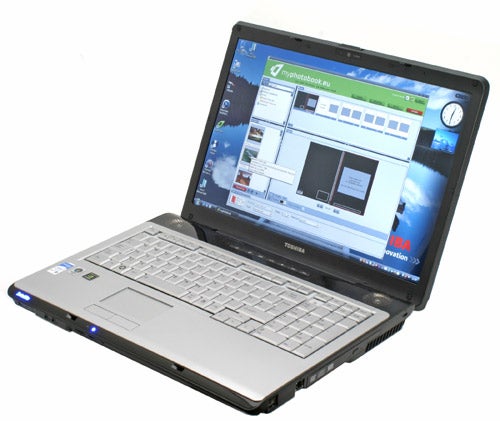 The problems begin with the processor, not only is it an older spec Core 2 Duo T5500 with only a 667MHz front side bus, but it’s clocked at a distinctly sluggish 1.66MHz. When you consider the likes of the Acer Aspire 5920 is shipping with a 2GHz CPU, and the Evesham Zieo N550-HD with a 2.2GHz CPU, you begin to get an idea of the gulf that exists.


This is extended to other components as well. The graphics solution, a 128MB nVidia GeForce Go 7600, is distinctly old hat, lacking any of the dedicated video processing found on its DX10 equivalent the 8600M-GT. This combined with the slow CPU means the Toshiba struggles with HD video content, with dropped frames and tearing occurring during action scenes. With this kind of content becoming increasingly common, it would be unwise to invest in a notebook – especially a DTR – which can’t handle this content to a satisfactory level. 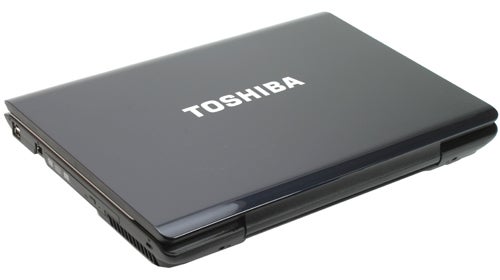 Happily, other parts of the specification aren’t as disappointing. The 200GB SATA HDD is very welcome, as is 2GB of 667MHz DDR2, which should help keep Vista Home Premium ticking over nicely. There’s a Dual Layer DVD Burner, and the P200-143 is one of only two in the P200 range that features Draft N wireless. This would make the P200-143 ideal for streaming HD content wirelessly were it not for the inability to play it back smoothly, further adding to the rather unbalanced nature of the specification. Bluetooth 2.0 EDR provides further wireless connectivity, though wired networking is restricted to 10/100 LAN with no Gigabit Ethernet to be found.


All in all it’s a real mixed bag, and on paper the P200-143 could be considered little more than mediocre in comparison to far better specified competitors. Casual users will probably find little fault, but those who are even remotely discerning will be severely disappointed.

At least in design Toshiba hasn’t lost its touch. This P200 shares the same basic design as the whole Satellite range, with a very attractive navy blue exterior and silver and glossy black interior. The only blemishes to my mind are the speakers, which seem rather ugly and out of visual sync with the rest of notebook. All the same, it’s something you can learn to ignore, and otherwise there’s plenty to praise.


Take the keyboard. Full sized keyboards on DTRs aren’t anything new, but this is certainly one of the best examples I’ve seen. The only obvious piece of compromise is the slightly smaller Enter key, and even this doesn’t have any real detrimental effect on the typing experience. As with the A200-1DN, which we looked at as part of our Student’s Guide to Technology, the keys are crisp and light and consequently the P200-143 won’t have you reaching for the nearest USB keyboard. Just above the keyboard is the usual set of basic shortcut buttons. There’s a power button – always useful – and it’s accompanied by internet browser and media player buttons, with playback buttons to the right of them. 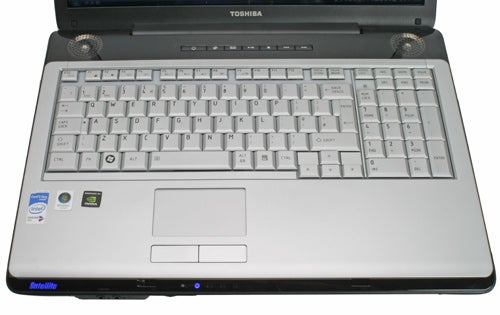 Being a 17in DTR, it’s unsurprising to find that this is a bulky machine, weighing 3.49kg and measuring 399 x 288 x 46.5 mm (WxDxH). Moreover, there’s something about the shape and design that makes it look even bigger than it actually is, as opposed to the Alienware Area-51 m9750 – another 17in notebook – which looked smaller than it actually was.


As for the 17in display itself, mediocrity again springs to mind. For starters the 1,440 x 900 resolution is disappointing; on a screen of this size 1,680 x 1,050 is really ideal. But, more importantly, the general quality of the screen is nothing to shout home about. It’s averagely bright, averagely vibrant, and has average viewing angles – it may as well be called Norman. 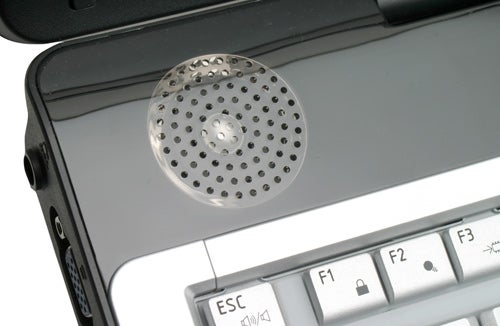 Indeed, one of the more annoying aspects of the display is the vertical viewing angle. When watching a film it’s very difficult to adjust the screen in a way that doesn’t result in some kind of colour shift, or inconsistent brightness, between the top and bottom segments of the display. It’s a problem that befalls quite a number of large notebook displays, but that doesn’t make it any less annoying.


Audio is also disappointing. During films dialogue is crisp enough, but overall the audio production from the in-built speakers is distinctly tinny and unimpressive. As such a decent set of desktop speakers or headphones are definitely necessary.

When it comes to connectivity, the P200-143 again pleases in some respects, but frustrates in others. On the left edge there’s a DC-in, a D-Sub port, an Ethernet port, two USB ports, an S-Video TV-out, an ExpressCard slot and just below that a 4-pin FireWire.

This covers the basics well enough, but there are shortcomings to be found. The S-Video port, for example, is a standard 4-pin version, rather than the 7-pin variety that allows for component output to an HDTV. Even the sub-£500 notebooks that were tested as part of the student technology feature had 7-pin S-Video ports. Why not on a notebook that costs twice as much?


Moreover, for notebooks of this size the inclusion of an HDMI port has become more or less mandatory and as such the lack of any such connection constitutes another black mark. Moving to the front there’s a wireless On/Off switch, microphone and headphone jacks, an analogue volume wheel and finally a 6-in-1 card reader which supports SD, SD-IO, Memory Stick, Memory Stick Pro, MMC and xD.

Just above these are a set of blue backlit status lights, while the model name ‘Satellite’ is also backlit in this fashion. It’s a smart touch, and serves to remind that though the specification may be lacking, the P200-143 still sports an attractive design for a notebook of considerable size. However, such touches cannot hide the obvious shortcomings.

It doesn’t help matters that Toshiba seems intent weighing down its consumer notebooks with as much useless software as it can. Some software is to be expected, but Toshiba seems to take things to unnecessary lengths with utilities such as Toshiba Flash Cards, which is a pop down menu that simply mimics the functionality of the Fn keys. This program takes up a significant amount of system memory, and is more of a distraction than anything else. If nothing else it would be wise to give the system to good spring clean before using it, and there’s a good case for doing a clean install too.

Performance was tested by running PC Mark 05 and our in house Photoshop and Virtual Dub tests. Given the spec, it wasn’t a great surprise to see the P200-143 struggling. Put up against the cheaper Acer Aspire 5920 and the similarly priced and targeted Evesham Zieo N550-HD, the Toshiba trails significantly in all tests. 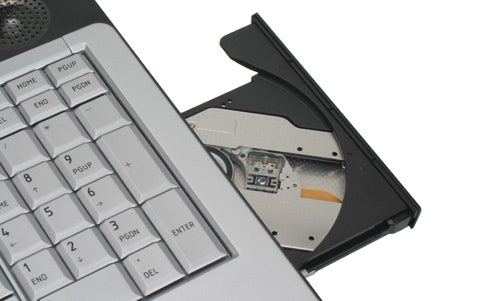 Gaming performance wasn’t that much better and subjective testing showed than playable frame rates could only be achieved at lower non-native resolutions, with the majority of effects and texture detail turned down. In any case it’s only sufficient for playing some of the older DX9 games, and will be at a loss when the DX10 titles begin to arrive.


Being a large notebook battery performance isn’t a high priority, but subjective testing provided unsurprisingly poor results with the notebook managing slightly less than two hours during general usage with display brightness at full, and with Wi-Fi enabled. It’s unlikely you’d be able to make it through a film with the no mains power, though this isn’t any great surprise. 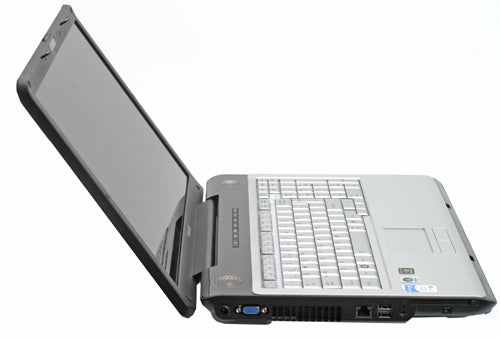 What this and the overall performance results show is that though the Toshiba Satellite P200-143 is mostly competent, performance is some way off what we’d expect for a notebook of this size and price. That you can get the exceedingly quick Evesham Zieo N550-HD for only £100 more is temptation enough, and that includes a Digital TV Tuner to boot.


A big display, large hard drive and decent design are the best things about the P200-143. Otherwise it’s a merely competent but slightly outdated notebook, with Draft N Wi-Fi thrown in. Until the range is properly updated there are better options available.