Convergence is a term often bandied about in tech circles, more often than not in reference to the latest smartphone. Yet, if you want a true example of convergence, look no further than the humble laptop. Modern day laptops combine a bewildering array of tasks, particularly those like the Toshiba Satellite A500-11U that are targeted at the lucrative desktop replacement segment. 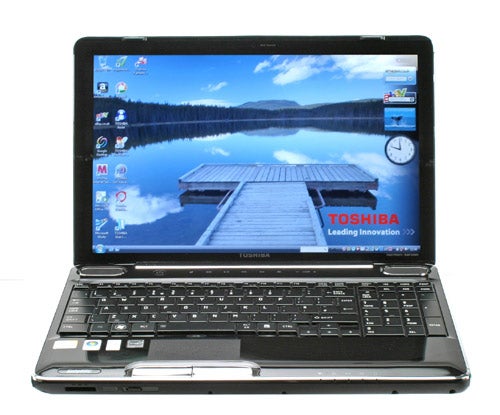 Though this isn’t a particularly cheap machine, squeezing just £50 below the £1,000 barrier, it delivers a great deal of processing power and a multitude of features for the money. Topping things is the Intel Core 2 Duo P8700, a dual-core processor that runs at a brisk 2.53GHz on a 1,066MHz front-side bus with 3MB L2 Cache. This is a good start, but Toshiba cuts corners a little bit by pairing this with slower 800MHz DDR2 RAM and although it supplies 4GB of the stuff, the 32-bit install of Windows Vista can’t address it all. For those interested, should you decide to buy this system, Toshiba will send you a Windows 7 upgrade disk for a discounted £27.90 inc. VAT.


If Toshiba’s lack of 64-bit support is a tad frustrating, it at least mends some bridges with the rest of the spec. A 500GB hard drive should be ample for all but the most voracious multimedia hoarders – just as well given there’s also a hybrid digital and analogue TV tuner on-board. Particularly impressive, too, is the discrete graphics; an ATI Mobility Radeon HD4650 with 1GB of dedicated memory. Draft-N Wi-Fi, Gigabit Ethernet and Bluetooth 2.1+EDR mean comprehensive networking support as well. 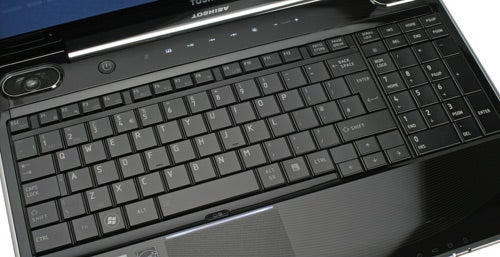 It’s just a shame Toshiba, now embracing all things Blu-ray, didn’t manage to squeeze an HD disc spinner into the sub-£1,000 price tag. This disappointment is made more acute by the presence of a backlit keyboard. Wonderful as they might be, it does feel just a little bit ‘me too’ and given the choice between Blu-ray or a backlit keyboard, Blu-ray would be the winner in our eyes. In truth, though, this is nit-picking since you can spin things any number of ways, like using slower components to offset the cost. If it’s Blu-ray you’re after then you’ll have to look to Toshiba’s Qosmio range, soon to be updated with Blu-ray and Windows 7.


Looking more closely at that backlit keyboard, it’s a decent effort. Thankfully Toshiba has abandoned the horrific glossy finish found in the previous Satellite design refresh, replaced with semi-gloss keys that don’t reflect light from every angle. In typical Toshiba fashion it’s a good keyboard. Key actions are tight and positive and the layout doesn’t throw up any gremlins. There’s a full number pad, too, enhancing its desktop replacement credentials. We did detect a hint of flex in some segments, but not enough to have any lasting impact. 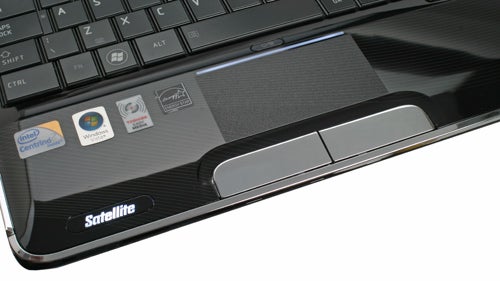 We also like the touchpad. It’s delineated by a low-friction, textured surface that’s very pleasant to use, sports the now ubiquitous multi-touch support and has two large and responsive buttons below it. And, though the touchpad is positioned so it won’t get in the way, there’s a small button above it should you need deactivate it.

Visually, Toshiba appears to have taken several pages out of the HP book of laptop design. It has taken some glossy plastic, imprinted it with some swooping lines and finished it off with liberal helpings of faux-chrome trim. Though it lacks any particular wow factor, it’s a tidy, smart chassis enhanced by restrained use of backlighting. Toshiba has also managed to integrate the two speakers far more tastefully than in the past, opting for tradition black grilles accented by yet more faux-chrome. 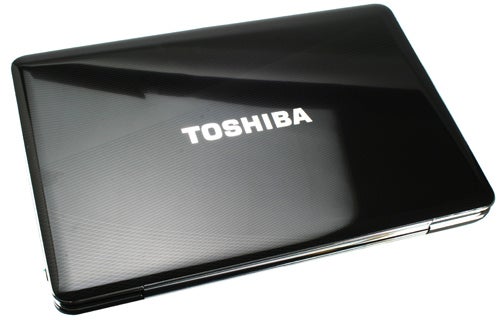 Unfortunately, though build quality overall is pretty good, it is let down by a few fit and finish issues around the display. There are some unsightly gaps where panels meet, while the corners of the plastic lid don’t sit flush with the trim. None of these are deal breaking issues and there’s manufacturing variability to consider here, but clearly there are a few potential fault lines around the machine.


As for the display itself, it won’t win any awards but is nonetheless perfectly competent. Its 1,366 x 768 native resolution is on the low side – if we can’t have Full HD (1,920 x 1,080) then 1,600 x 900 would be nice – but it’s acceptably bright, doesn’t suffer any noticeable light bleed and produces balanced, neutral colours. In common with most laptop displays, viewing angles are merely okay, but they’re not bad enough to affect normal viewing.

So the display isn’t anything remarkable, but the integrated Harman Kardon speakers are very good indeed. Even without a mid-range sub, the A500 produces a pleasingly wide and clear sound that’s good enough for casual music listening and films. Only very big explosions pose meaningful problems, causing some noticeable distortion, but we wouldn’t expect anything more and in every other respect these speakers are top-notch.

Superlatives continue with the connectivity, which covers more than just the basics. There’s VGA and HDMI, three USB ports and one further USB/eSATA combo port that boasts sleep & charge capability, while the headphone jack doubles as SPDIF, too. Other options include a 54mm ExpressCard slot, memory card reader and TV aerial connection (a proper one, not a miniaturised one with an adapter), though we must call out Toshiba for including an infrared receiver on the front but no remote to go with it – a sin made worse by the presence of the TV tuner.

While the optical drive is just a regular DVD+/-RW affair, it is slot-loading. Moreover, unlike the vast majority of manufacturers, there’s a button right by the drive for ejecting discs, instead of one buried away in some other unintuitive position. It’s good to see Toshiba not throwing out years of design convention for no good reason.

On paper the A500 ought to be a very quick machine, so good things were expected from the benchmark results. It duly delivers, putting in a great performance in PCMark Vantage and only just failing to break the 4,000 score barrier. Had Toshiba installed a 64-bit OS it would have done even better, but all the same the A500 has genuine desktop replacing speed on its side. 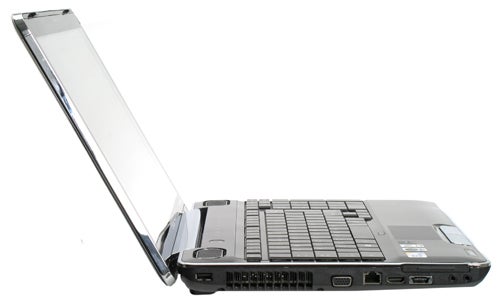 This is matched by some serious gaming muscle, too. Though it’s not a gaming laptop per se, it comes as close as possible without actually crossing the divide. We managed to ramp Trackmania Nations to ‘Very High’ settings and still maintain a playable 33.5fps, so the likes of Call of Duty 4 and Left 4 Dead should be more than playable and at good settings, too. Naturally the system does get fairly noisy when running games, but show us a laptop that doesn’t.


Inevitably there is a penalty to pay for all this performance. Just less than two hours in the Productivity segment of MobileMark 2007 is a pretty poor result, reflected in equally miserly outcomes in the other tests. However this machine weighs a considerable 3.18kg and measures 384mm across, so portability is hardly high on the agenda. As such, the A500 gets a low score for battery life, but it doesn’t factor very heavily in the overall score.


And it’s a fine overall score, too. While the A500-11U doesn’t do a great deal to set hearts racing – it’s not outstandingly good-looking or particularly innovative – it is (mostly) well made, flexible and powerful. In short, it’s everything you’d want from a desktop replacement and it does it all for a good price to boot. 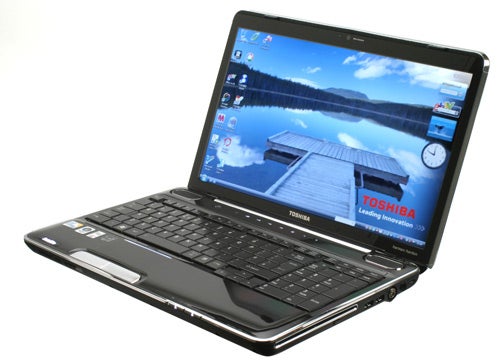 
Minor fit and finish issues aside, the Toshiba Satellite A500-11U is a cracking desktop replacement laptop. It’ll gobble up CPU intensive tasks and games with aplomb, while the addition of a TV tuner and ample storage space makes it perfect for people short on space. We’d like to have had a 64-bit OS to go with the prodigious processing power, but it’s still a system well worth recommending.

(centre)
Battery life clearly isn’t a strong point, but then this isn’t a machine meant for true mobile use. It does, however, have enough life for spurts of untethered use around the home.
(/centre)