16:9 is taking over from 16:10 as the de-facto aspect ratio for both monitors and notebooks, thus 15.4 and 17in notebooks are slowly being replaced with 16 and 18.4in models. Enter Toshiba’s latest entry into this fray, its Satellite A350-11N. Now despite the company’s recent run of fairly average (Qosmio G50) and below average (Portégé M800) notebooks, recently we’ve fallen in love all over again with the stunningly light Portégé R600 ultra-portable. However, at first glance the A350 looks to be nothing more than an update to the solid but unremarkable Satellite A300-177. Has Toshiba upped the ante? 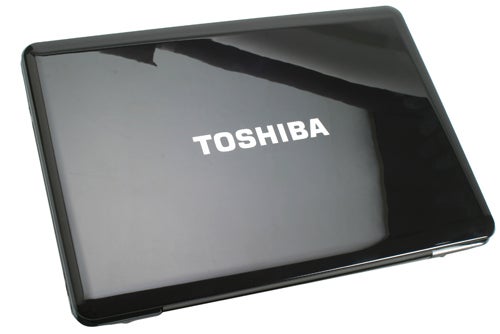 Well, one improvement is immediately apparent: Toshiba has ditched the pinstripe ‘Horizon’ finish on the outer lid in favour of glossy black with very subtle blue flecks. Yes, this does show up fingerprints and grease, but it gives this new Satellite an undeniably classier look and Toshiba has been thoughtful enough to include a soft cleaning cloth to keep it in pristine condition.


Build quality, as is typically the case with Toshiba’s notebooks, is very good and reflected in a strong hinge for the lid and quality plastics throughout. Inside, those stripes of old do return, but they’re just a bit more subtle, while the extra space and wider form factor brings them out to good effect. Faux-chromed touchpad buttons also make a return and overall the A350’s mostly piano black chassis strikes an elegant and subtle improvement over its predecessor. 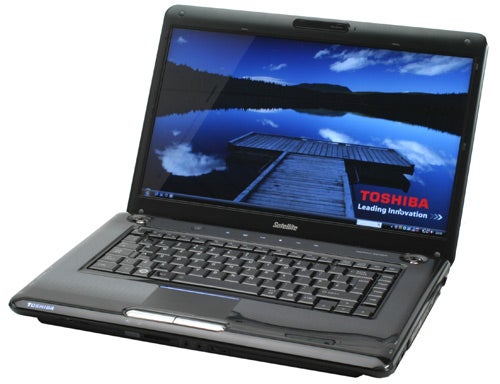 Nor are the improvements over the A300-177 cosmetic only, as we can see by the long-overdue addition of eSATA to connectivity. However, a far more important change hasn’t made the cut: there is still no sign of an HDMI port or other form of digital output. At least the rest of the connectivity is all there. We have a VGA and Ethernet port – though it’s not Gigabit – together with USB and mini-FireWire on the left. Here we also find the eSATA port (doubling as a second USB) and a 54mm ExpressCard slot.


To the right we have the DVD-Rewriter, modem port and two more USB connectors. At the front of the machine is a hardware wireless switch, which is always a nice addition, a multi-format memory card reader, 3.5mm headphone/S/PDIF and microphone jacks and a very welcome archaism in the form of a volume control wheel. As before, handy little icons above the connectors show you exactly where to plug things in without having to look around the sides. 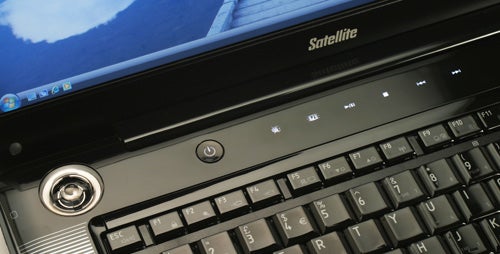 Also on hand is the rather attractive white LED lighting of the Satellite range, consisting of status indicators below the touchpad and a thin white bar above it, the Toshiba logo off to the left, the power button and the usual set of touch-sensitive controls above the keyboard. This makes the A350-11N very easy to use in the dark and if for some reason you don’t like the effect you can always turn it off. Unfortunately, the touch media controls don’t seem to be as sensitive as on the previous model, occasionally requiring a few firm presses to work.

Typing on the Satellite A350 is a pleasure. While fingerprints do show up on the glossy keyboard keys from certain angles, it’s much less visible than with the rest of the notebook. Its layout is good, avoiding many of the typical pitfalls and sporting some intelligent decisions, such as the slightly withdrawn cursor keys and the Page Up and Page Down running vertically down the right-hand side. Keys are slightly slippery thanks to the shiny finish, but after extended use it’s not a bother and in any case is more than made up for by the excellent, crisp key response.. 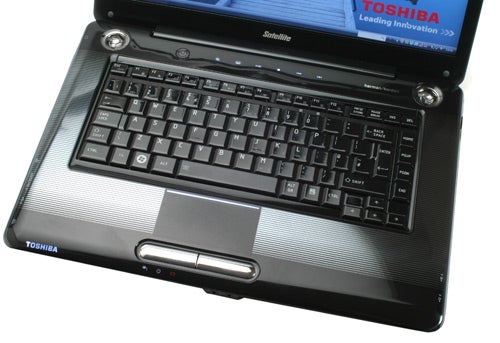 Below all this, the touchpad is a good one with a wide aspect to match the screen and an ideal matte textured surface. It’s a pity that after all this praise, the touchpad’s buttons have to go and spoil things somewhat. While they’re large and well-positioned, they’re still too stiff. Their chromed surface together with their rounded shape also makes them unpleasantly slippery, as well as showing off the slightest fingerprint.

Of course the internals of Toshiba’s latest budget notebook have also seen a bit of an overhaul, most significantly from the A300-177’s Centrino 1.83GHz T5550 to Intel’s Centrino 2 chipset and a T5800 Intel Core 2 Duo running at 2.0GHz. Memory has also doubled to 4GB of 800MHz DDR2, though a 32-bit version of Vista Home Premium won’t take full advantage. However, it’s the perfect excuse to upgrade to the 64-bit edition of Windows 7 when it comes out. For storage you now get a 250GB hard drive (split into two roughly equal 115GB partitions), which is a modest increase but adequate for everyday use. Though there is no built-in Bluetooth, wireless is well up to scratch with Draft-N included for improved Wi-Fi range and faster data transfer.

Intel’s new Centrino 2 chipset also brings with it a new graphics chip, the GMA 4500M HD, which is fine for everyday use but will struggle with most games and only managed 15.5fps at Medium Quality in TrackMania Nations Forever at the screen’s native 1,366 x 768 resolution.


Speaking of the screen, this is probably the biggest change as Toshiba has switched from 16:10 to 16:9; a more film-friendly aspect ratio. Unfortunately, aside from putting the weight up from the A300’s 2.7 to 2.94kg, the reflective display is not the best example we’ve come across. Text is sharp, there’s barely a hint of banding or backlight bleed and it even did fairly well in our greyscale testing, but this mostly good performance is ruined by poor viewing angles, where watching at a slight angle introduces severe contrast shift.

One thing you can usually be confident about when you get a Satellite is its audio performance and this remains the case. For their size the integrated Harman/kardon speakers are brilliant, reaching high volumes, producing depth and bass that belies their stature and enviable clarity, too. Only when you really ratchet up the volume does a hint of distortion creep in, but aside from this you’re unlikely to find a better set of speakers in a notebook costing this little.

When it comes to software, there is an awful lot of it loaded onto the Satellite. Most of it is useful for something, like Toshiba Supervisor Password Utility, but there is also a lot of bloat. What for example, is the use of HDMI Control Manager on a notebook without HDMI? 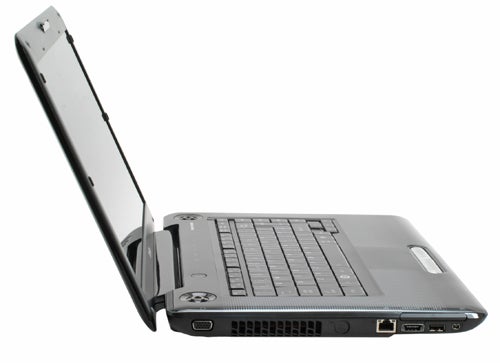 Battery life, meanwhile, sees a significant boost over the older A300 thanks to the Centrino 2 platform upgrade, with a fairly impressive MobileMark Reader result of three hours and 21 minutes, just over three hours in the Productivity test and just under two in the DVD Playback test. For raw number crunching, meanwhile, the A350 performs well enough and though it’s no powerhouse, for typical household usage it’s more than adequate.

Finally, we look to that most crucial of considerations: price. Direct from Toshiba, the Satellite A350-11N notebook is £529, but it can be found online for just under £500. This puts it squarely in the budget arena and, for the money, it offers a reasonable set of features, but competition is (as ever) fierce. For example, the Medion Akoya S5610, a 15.4in notebook, is available for the same money and offers a number of extra features, including HDMI output and discrete ATI graphics. Or, if you want a larger screen size, similarly-specified 16in and 17in notebooks from big brand names like HP and Acer are available for less from the likes of PCWorld and Currys. 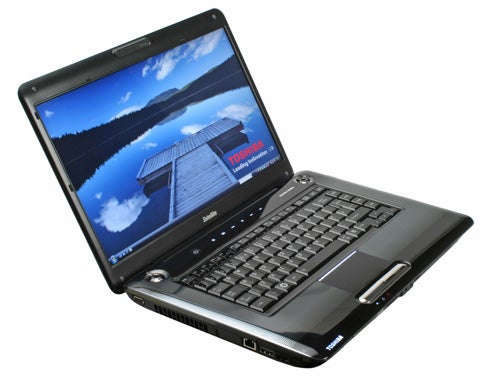 
Overall then, in the Toshiba Satellite A350-11N we have a notebook that carries over a lot of the strengths (including darn good speakers and an excellent keyboard), but unfortunately also a lot of the weaknesses of its predecessor. It’s not bad value for the money and does offer fairly good battery life, but considering failings like the screen’s poor viewing angles and lack of digital video output there might be better and cheaper alternatives available depending on your priorities.