Without consciously intending to do it, it just so happens that so far all the current Toshiba TVs we’ve tested have come from the bottom half of the brand’s latest range. But actually that’s proven to be no bad thing for the brand, for while not exactly setting new AV standards, most of Toshiba’s cheap and cheerful brigade have won us over thanks to their pretty extraordinary value for money.


Which kind of puts the pressure on the 46XV635D I’ve got my hands on today. For as the most highly-specced TV we’ve seen from Toshiba’s current range so far, we can’t help but wonder if it can really deliver enough extra quality over its startlingly good entry-level siblings to justify its higher cost. 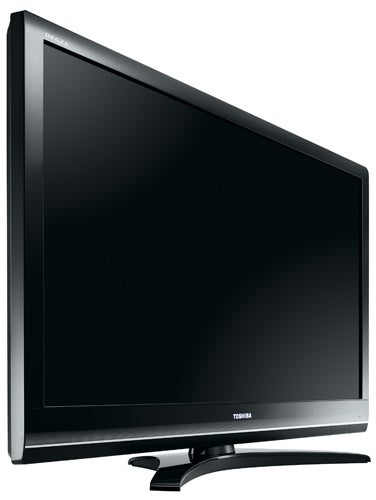 That said, at only a tenner over £800, the 46XV635D is not by any stretch of the imagination expensive versus the 46in TV world as a whole.


It’s a bit disappointing, though, to find the 46XV635D not really delivering much of an aesthetic bonus over its cheaper kin. Don’t get me wrong; the reasonably svelte, highly polished black bezel, offset by a silver strip in the bottom edge and bold (deactivatable!) illuminated Toshiba logo certainly isn’t unattractive. The ‘boomerang’ desktop stand is cute, too. But in a review where we’re looking for reasons other than raw screen size to pay more for the 46XV635D than we would for, say, Toshiba’s RV635 range (which tops out at 42in), a bit more extra aesthetic pizzazz wouldn’t have gone amiss.

The 46XV635D has an extra trick up its sleeve when it comes to connections, though: a new SD card slot for playing back JPEG photos. This rests alongside other highlights of a PC port, four HDMIs, and a USB port capable of playing back JPEGs, MP3s, and DivX video files (though not, sadly, DivX HD).


Arguably the 46XV635D’s biggest specification boost over the RV635 range is the addition of 100Hz to its video processing engine, as reflected in that processing engine’s rather long-winded name: Active Vision M100 HD Pro.


The 100Hz element, as per usual, is intended to reduce LCD technology’s common problems with motion blur and judder, while other elements of Active Vision work on stuff like improving video scaling, boosting colour reproduction, enhancing the contrast performance, and so on. 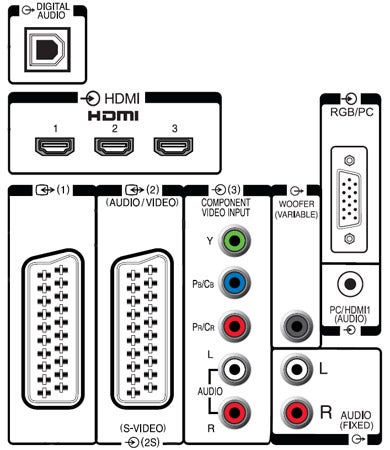 Actually Active Vision M100 HD Pro isn’t by any means the 46XV635D’s only picture processing component. In fact, it is itself subsumed under a wider umbrella title, the much more catchy ‘Meta Brain’. And sitting right alongside Active Vision in the Meta Brain is Resolution+: Toshiba’s so-far utterly dependable system for adding detail to standard definition pictures.


Having recently seen Toshiba’s Cell Regza TVs at the CEATEC Show in Japan, it has to be said that Resolution+ (which draws on elements of Toshiba’s Cell processing PC technology) now feels like a mere hors d’oeuvre for the fully fledged Cell-powered TV deal.


But if Resolution+ works its usual magic on the 46XV635D’s standard definition pictures, it will at least be a very tasty hors d’oeuvre – a mini beefburger with relish, perhaps, rather than some dodgy fish paste scraped onto a bit of stale toast. If you’re still following the ridiculously over-strained metaphor.

The 46XV635D’s onscreen menus are strikingly well stocked with features – though not noticeably more so than those of the RV635 series.


The first thing you see is an unusually helpful set of picture presets, including AutoView, Toshiba’s quite sophisticated mode that combines analysis of both the ambient light conditions in your room and the image content in order to arrive at what it judges to be the optimal picture settings.


There’s also: a surprisingly flexible colour management mode complete with the facility to turn off individually the red, green or blue colour elements; the option to deactivate the dynamic backlight; a handy black/white level sliding bar; a good degree of static gamma adjustment; both MPEG and standard noise reduction routines; the option to turn 100Hz on or off; and the facility to not only switch Resolution+ on or off, but also adjust the ‘heaviness’ with which it works. 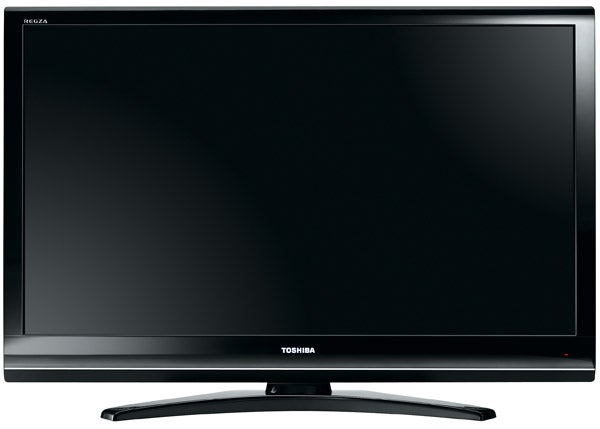 Personally I found nudging the Resolution+ level down to two from its default three setting gave the most pleasant overall results with Freeview and Sky standard definition broadcasts. But the main point here is that Toshiba has thoughtfully provided enough flexibility to allow you to adapt the feature to suit your own tastes.


Once tweaked to my satisfaction, Resolution+ leaves me impressed once again with its knack for adding detail and sharpness to standard def pictures without simultaneously exaggerating source noise. In fact, its impact is arguably even more impressive on this 46in screen than it has been on the smaller Resolution+ Toshiba TVs I’ve tested previously.


The sheer size of the 46in screen might also have something to do with the way I felt that the 46XV635D’s pictures looked brighter and more vibrant than those of its smaller siblings. Sure, some picture presets – especially Movie – still leave things looking a touch too dull for comfort. But using my own settings, I felt I was able to get a decent enough balance of brightness and black level response.


In fact, the 46XV635D’s reproduction of black really is good, as the darkest corners of the darkest scenes manage to suffer relatively little with LCD’s still-common grey mist problem, while also managing to contain at least a degree of shadow detail. Surprisingly, the 46XV635D even achieves good black levels without the Active Backlight Control being switched on, so you also don’t have to worry about dark scenes being marred by that common LCD problem of distractingly obvious shifts in backlight output.

More good news concerns the 100Hz engine, which undoubtedly helps the 46XV645D reproduce motion with greater clarity than its cheaper stablemates, especially if you’re watching sport. What’s more, the 100Hz engine does its work strikingly cleanly, with practically no discernible processing side effects for 99 per cent of the time.


I’ve noted that some cheaper Full HD Toshiba TVs with Resolution+ processing have tended to look a bit soft with HD. But this certainly can’t be said of the 46XV635D, which presents Blu-rays and HD broadcasts with admirable clarity and detail (so long, at least, as you deactivate all the set’s noise reduction circuitry) without over-stressing edges or leaving the image looking unduly gritty.


In fact, the 46XV635D’ s pictures sail dangerously close to bagging a 9 out of 10 for its money; at their best challenging the pictures of 46in TVs costing hundreds of pounds more.


But it’s sadly let down by a couple of niggly flaws. First, the backlight level isn’t completely consistent across the whole screen. Our review sample looked slightly lighter on the left side – especially the top left side – than it did on the right. I should stress that, post calibration, this issue is so low-level that it only becomes even a small issue during very dark scenes indeed, and is practically unnoticeable if you’ve got any amount of ambient light in your room. But it would still be nice not to see it at all. 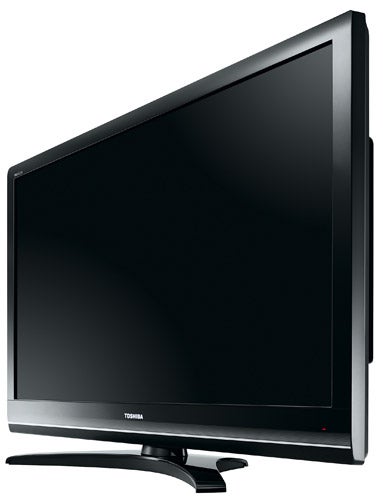 The 100Hz engine is responsible for my other main concern with the 46XV635D. For while watching 24p Blu-ray feeds, although the 100Hz system certainly reduces judder without generating blurring or lag artefacts, it also causes a curious ‘twitch’, where the image repeatedly seems to pause or even skip back a frame for a fraction of a second.


To be fair, this glitch is actually imperceptible for much of the time, only coming out when objects were scrolling quite slowly across the screen. Indeed, it’s possible some people will never see it at all. But I personally found it sufficiently annoying that I switched my Blu-ray deck to output 1080p/60 instead of 1080p/24 – a move that many AV purists may be unhappy to copy.


One final irritant with the 46XV635D’s picture is the way black levels and colour saturations drop off rapidly if you have to watch the image from down the TV’s sides. But this is hardly rare in the LCD world.


Sonically the 46XV635D is pretty respectable by skinny TV standards, sounding reasonably rich and detailed at the treble end of the spectrum, solid if not exactly beefy at the bass end, and reasonably open in the mid-range, even if you drive it quite loud.


The 46XV635D handsomely overcomes my doubts as to whether it could bring enough extra to the table to justify its cost over Toshiba’s cheaper RV635 models. And in doing so, it ends up looking like a real bargain itself considering how much it has to offer.


The backlight inconsistency and 100Hz twitch with 24p Blu-ray playback may put off movie lovers wanting a screen for watching loads of HD movies on, but anyone looking for a more straightforward all-rounder will find much to love – especially given its impressive standard definition talents.