Less than a year ago I reviewed the Toshiba 42WLT66 and I was completely blown away at the idea of a 42in 1,920 x 1,080 TV for under £1,500. Of course despite having a Full HD resolution, that particular TV didn’t support a 1080p input, which wasn’t too much of a problem considering that there were no 1080p source devices at the time. But a great deal has happened since I reviewed the 42WLT66, we now have HD DVD and Blu-ray players outputting native 1080p signals, along with the PlayStation 3 doing the same. Thankfully Toshiba has kept up with technological advancements and given us the 42X3030D as a replacement to the 42WLT66, and if you thought you were getting a lot for your money with the old TV, just wait until you see the new one! 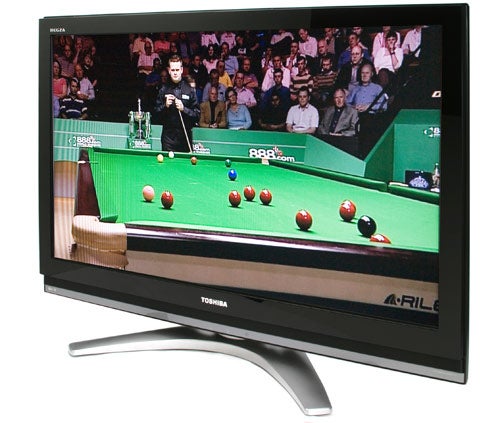 
As well as being 1080p compliant, the 42X3030D sports two HDMI 1.3 ports, meaning that this TV will support the Deep Colour feature associated with the new standard. So, assuming that you couple this TV with Toshiba’s HD-XE1 HD DVD player, and find yourself some compatible software, you could be enjoying the increased colour depth that HDMI 1.3 can offer. Complementing the HDMI inputs is a set of component inputs for hooking up analogue HD sources like an Xbox 360. You also get two SCART sockets, composite video in, two sets of analogue stereo inputs, analogue stereo out, subwoofer out and an optical digital output – the latter being for outputting a Dolby Digital stream from Freeview if anyone starts to broadcast such a service, and for passing through digital audio from the HDMI ports. 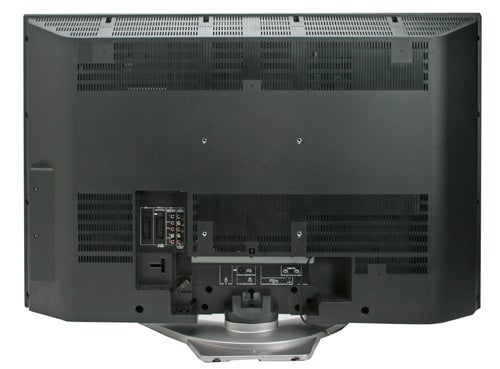 Toshiba continues its tradition of using captive power cables on its TVs – of course a separate power cord has the advantage of being easily replaceable, but I can’t remember every having a TV where the power cable failed. Also at the rear is a CI slot for adding subscription channels to the integrated digital tuner, while rounding off the connections is the RF input for an external aerial.


The 42X3030D definitely looks the part. It separates itself from the entry level Regza 42C3030D by sporting a glossy black bezel instead of a matt finish. The result is a great looking TV, with the crescent shaped silver stand adding to the aesthetics as well as offering smooth panning. The speakers are barely noticeable – there’s a very slim grille just below the screen – so there’s really nothing to detract from the clean, minimalist lines.

The remote control is identical to the one seen with the 42C3030D – this is a big improvement over the last generation of remotes, but it still lags behind the TV design in the style stakes. The remote is at least pretty responsive, even in the Freeview EPG – it’s also good to see that there’s the ability to jump forward 24 hours at a time.


The 42X3030D shares the same OSD as the cheaper 42C3030D, but this time everything is applicable. Although the 42C3030D had the Exact Scan Mode in its menu, this setting only applies to 1080 line panels. Basically Exact Scan is just Toshiba’s label for 1:1 pixel mapping, which means that if you feed the 42X3030D a 1,920 x 1,080 signal, it will display that image pixel for pixel, with no hint of over scanning. The result is a far sharper picture, with no scaling involved. 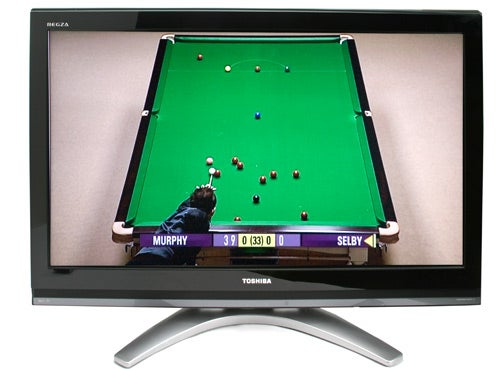 There’s both MPEG noise reduction and DNR on offer – a setting of Middle for the former and Auto for the latter seemed to do a good job of cleaning up dirty sources, without making the picture look over-processed. The 42X3030D also employs a dynamic backlight, so the intensity of the backlight will adjust depending on the scene being watched – during darker scenes the backlight will be turned down to help produce more convincing blacks. The dynamic backlight allows Toshiba to quote a dynamic contrast ratio of 6000:1, and although the contrast and black levels are good on the 42X3030D, they’re still no match for a decent plasma TV.


Slightly disappointing is that this TV doesn’t sport Toshiba’s Active Vision M100 100Hz processing – this basically doubles the amount of frames displayed each second by interleaving composite frame between each actual frame of video. I first saw Active Vision M100 when I reviewed the Regza 32WLT68 and was quite impressed with the way it pretty much eradicated motion smearing. Unfortunately Toshiba has reserved this feature for the top-of-the-range Z series, which is due out in September. 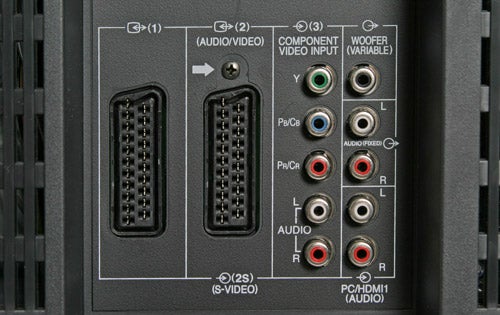 When it comes to picture quality the 42X3030D puts in a sterling performance, making it clear that anyone considering Toshiba’s entry level 42C3030D should seriously reconsider and spend the extra on this TV instead.


I know that I keep using Casino Royale on Blu-ray as a reference source, but it really is that good! I loaded Bond’s latest adventure on a Panasonic DMP-BD10A Blu-ray player which sent the gorgeous 1080p signal to the 42X3030D’s HDMI port. The images produced by this TV were staggeringly good, with the bright, slightly oversaturated Madagascan chase scene looking pin sharp and crystal clear. There were also no discernable motion smearing issues, although the clarity of the image drew me into the proceedings to such a degree that I often found myself just watching the movie rather than evaluating picture quality! 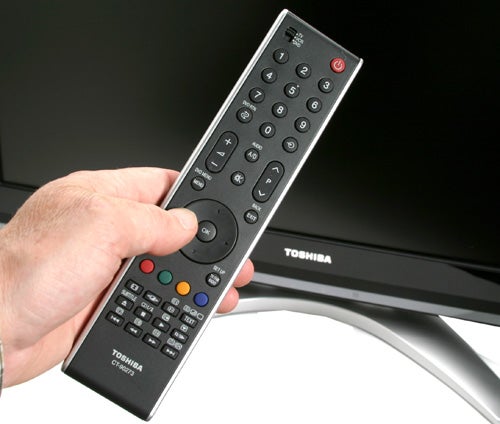 Switching formats to HD DVD I hooked up Toshiba’s HD-XE1 and loaded Serenity into the tray. Skipping to the space battle with the Reavers highlighted once more the supreme sharpness offered by the 42X3030D, as well as an extremely vivid colour palette. With the action spinning and spiralling in every direction as Wash threads his way through the convoy of spaceships, the 42X3030D produced a completely immersive viewing experience. And when River single handedly slices and dices the Reavers at the end, the 42X3030D does a pretty good job with the dark setting, with convincingly deep blacks for an LCD screen.

Turning to our resident Xbox 360 I loaded Virtua Tennis 3 – not only is this game graphically awesome, but it also supports 1080p output. The resulting images on the 42X3030D were nothing short of staggering! The colours were rich, vivid and vibrant, while the level of detail was as close to photorealistic as I’ve seen from a console game. Likewise, the cinematic grandeur of Oblivion was conveyed with awe inspiring clarity on the 42X3030D. 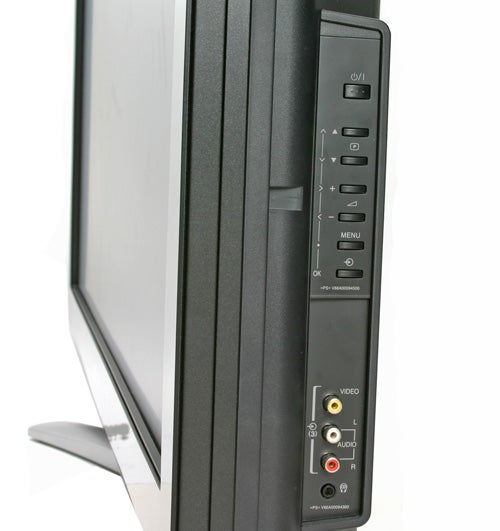 Of course one of the toughest challenges for a Full HD television is making standard definition content look good. With a PAL SD signal only sporting 576 lines, a Full HD TV is having to almost double the amount of data it’s receiving, which can cause some horrible results, but thankfully it would appear that Toshiba’s image processing is up to the job. In fact the integrated digital tuner produced very clean and clear images, even with very poor Freeview channels. Obviously there were instances where there was just too much compression for even a good picture processing system to cope with, but on the whole the 42X3030D does as good a job as possible with SD content.


Despite the very slim and unobtrusive speakers, the sound quality from the 42X3030D is surprisingly good. There’s SRS processing on hand too, and the 3D Surround setting creates a pretty convincing sound stage. There’s a decent amount of bass on hand for those big action scenes, but there’s also a dedicated subwoofer output at the rear if you want to add to your low frequency effects. 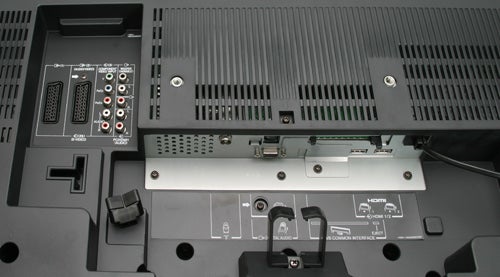 Considering that less than a year ago I was raving about Toshiba’s 42in 1080i 42WLT66 costing under £1,500, it’s quite amazing to think that the 42X3030D can be had for as little as £975 online. Considering the cutting edge components inside this TV, the price simply belies belief.


I don’t know how Toshiba keeps doing it, but once again it has created a cutting edge TV at a truly astounding price. Not only do you have a Full HD 1,920 x 1,080 panel, but you’re also getting 1080p 24, 50 and 60 input support. Add to that the pair of HDMI 1.3 ports, the stylish design and the impressive image quality, and the 42X3030D makes a very compelling case for itself.