Toshiba has a reputation for producing feature-packed LCD sets at relatively affordable prices, and it continues that tradition with the RV635 series. This range is among the first to incorporate Toshiba’s Meta Brain, which isn’t a character from a 1950s sci-fi movie as the name suggests but an all-powerful single-chip processing solution.


But before we get to that, let’s take a second to drink in this 37in set’s lovely looks. Clad in the gloss black finish currently fashionable among LCD TVs, the set oozes class without really pushing the boat out. Under-screen speakers keep things nice and compact, while the Toshiba logo below the screen lights up when the set is switched on, which will no doubt split opinion but we think it makes an eye-catching embellishment. It’s perched on a fetching swivel stand too. 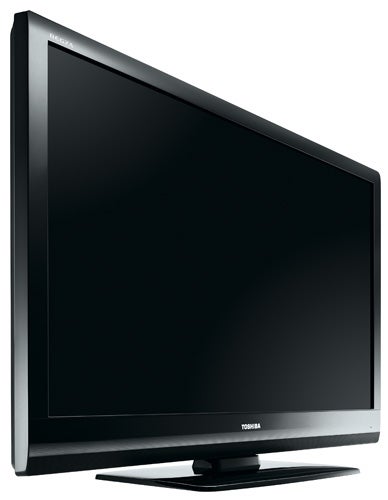 And if you want lots of connections, you’ve come to the right place. The back panel is equipped with three HDMI inputs for your HD kit, as well as component video, PC and two SCART inputs. More connections can be found on the side, including a fourth HDMI input (impressive at this price), a CAM slot for adding pay TV channels and a USB port, which lets you view JPEG photos from a flash memory drive using the Media Player feature.


But let’s get back to Meta Brain, the umbrella term for a group of processing technologies that sets out to deliver the best possible image quality no matter the source. Among them is Resolution+, which upscales SD pictures to HD resolution and brings them closer to HD levels of sharpness by enhancing edge detail and textures. It’s worked brilliantly on previous Toshiba sets and we’re hoping for similar levels of success here – and as an added bonus, Resolution+ can now be applied to hi-def pictures as well as SD ones (previous sets disabled it when they detected a 1080p source) so we’re eager to see the results.

Anyone who baulks at their electricity bill every time it drops onto the doormat will appreciate this set’s Eco Panel, which eats up much less power than Toshiba’s regular LCD panels. The key is that the panel is so translucent that only half as much power is needed to illuminate it. This is not only good for your electricity bills but it’s also kinder to the environment, and the ‘Full Power Down’ option (or the off switch) means you don’t have to leave it in standby overnight either.


The panel is 1,920 x 1,080 Full HD of course, plus the 50,000:1 dynamic contrast ratio, 450cd/m2 brightness and 5ms response time figures sound healthy enough. Other features include a self-explanatory Game mode, an Exact Scan mode for 1:1 pixel mapping and 1080/24p support for Blu-ray playback. 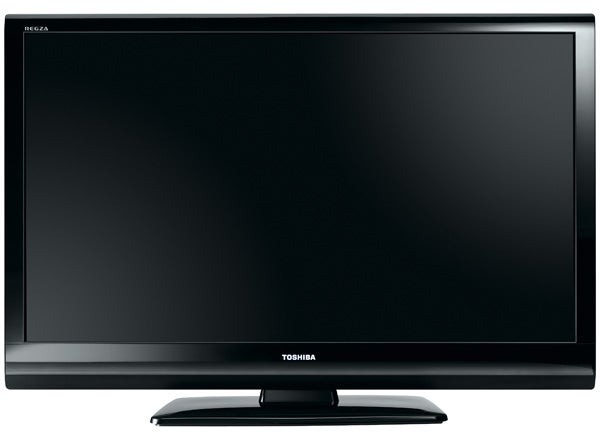 The 37RV635DB’s operating system has also been given a fresh lick of paint, and now the onscreen design is a lot clearer and easier on the eyes. And we mean that literally – the menu graphics seem much softer than the pin-sharp displays on previous Tosh sets.


It is, however, supremely easy to use, with sensibly sequenced submenus and clever use of funky icons to break up the barrage of text. The EPG and digital TV displays are attractive and the supplied remote boasts an intuitive layout and large buttons that make it easy to find any function. We like the addition of a ‘Quick’ button that provides easy access to key tweaks.


Talking of which, there are more picture adjustments on offer than we expected for the money, going beyond the usual colour, brightness and contrast settings, which means you can calibrate the picture to quite an accurate degree. Sound tweaks are limited but the Bass Boost mode might come in handy.

As for performance, the Toshiba’s picture quality is impressive – as long as you’ve got Resolution+ turned on. Watch high-definition material like ”The Curious Case of Benjamin Button” on Blu-ray without it, and the picture is softer than we normally like our HD sources to be. Yes it has an unmistakably hi-def quality, but it’s nowhere near as sharp or well-defined as it could be.


But turn it on and the picture snaps into focus, emphasising the delicate facial detail and subtle textures within the movie’s beautiful scenery. Edges are harder, and there’s an extra depth to the picture that makes it much more compelling.


The same goes for standard definition material from DVD or the built-in Freeview tuner, which look exceptionally crisp and detailed with Resolution+ activated. Switch it on and off and you can see the dramatic improvements it makes. On the downside, it can emphasise noise in the picture on particularly bad quality material (so avoid ITV3 and VHS) but give it a decent source and the results are astonishing. 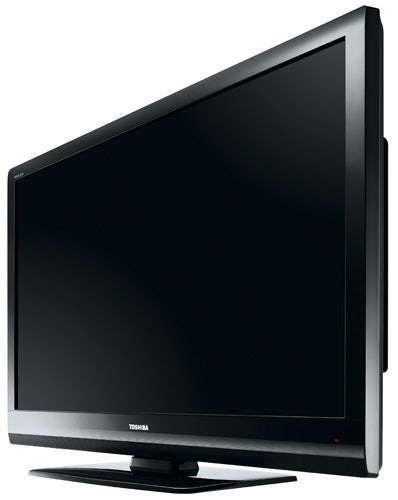 Reading about the set’s extra translucent Eco Panel didn’t fill us with confidence over the set’s black level capabilities, but it does a pretty good job at reproducing dark objects, making them look reasonably dense and three-dimensional. That said, there is a touch of misty greyness evident in some dark areas that can compromise the cinematic quality of film material, but it certainly won’t have you marching the set back to the shop in disgust. And with colours, the set has the processing dexterity to handle subtle blends and strong hues within the same frame without making either look unnatural.


Sonically the set doesn’t do justice to loud action movies, lacking the bass clout and width to make a real impact, but if that’s what you’re after use a proper home cinema system. The Tosh is much more comfortable with calmer dialogue-based material, where it delivers clear, forthright voices and music without straying into harshness.


With a generous set of connections, alluring features and excellent Resolution+ assisted picture quality, the 37RV635D is an absolute bargain, particularly if you can get it for the sort of prices we found online. Of course had Resolution+ not been on the spec sheet we might have been telling a different story, as its picture quality is decidedly average without it. But its over-reliance on this technology isn’t a problem – we say if you’ve got it, flaunt it.