No, your eyes are not deceiving you. We really have said at the top of this review that Toshiba’s 37in 37CV505DB LCD TV can be bought for under £600.


It has to be said, though, that the 37CV505DB does slightly look its money. The basic design isn’t bad; the relatively slender gloss black bezel with gentle curves at the edges is acceptable if unimaginative. But to my eyes the finish looks a bit too plasticky for comfort.


Things are perfectly acceptable when it comes to connections, though. Which is to say you get three v1.3 HDMIs, two on the rear and one down the side, along with a dedicated D-Sub PC port, a digital audio output, a component video input, and all the old-fashioned SCARTs and stuff we urge you not to bother with unless you really have to these days.


As proven by its knock-down price, the 37CV505DB is very much Toshiba’s entry-level 37in LCD TV. So you won’t be too shocked to learn that it’s a little light on fancy features. 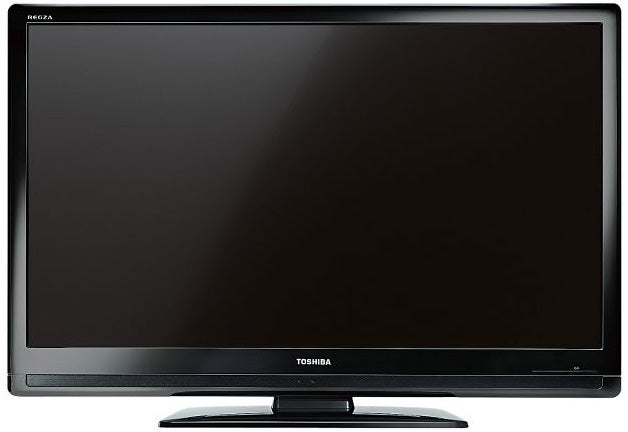 The main attraction is a version of Toshiba’s Active Vision LCD picture processing engine, which will hopefully work ‘magic’ on everything from colour tones and fine detailing to contrast and motion.


There’s a dynamic backlight system on board too, via which the 37CV505DB claims to punch out a very credible 15,000:1 contrast ratio – the sort of figure we’d expect to produce some very respectable black level response and image dynamics.


There’s also an automatic contrast adjuster that uses an external sensor to judge the amount of light in your viewing room; MPEG and standard noise reduction; 1080p/24 capability (though without the specialist, judder-removing ‘5:5:5′ pull-down system employed on sets higher up Toshiba’s range); and that ‘feature du jour’ known as a game mode, where the TV miraculously reduces its response time and optimises other TV settings to deliver the best results with game consoles.


One final rather hilarious ‘green’ feature that the 37CV505DB Toshiba seriously tries to get some marketing mileage out of is a Full Power Down Mode. And yes, this really does mean the TV carries a switch allowing you to complete turn it off, rather than leaving it in standby. Wow. And they say innovation is dead.

The 37CV505DB’s performance is a classic example of something that’s pretty much only being as good as what you feed it. In other words, while it impresses greatly for its money with HD, it sometimes struggles with standard def.


Starting with the good stuff, I was very pleasantly surprised by how crisp the final test match between England and South Africa looked in HD via Sky. The screen only has an HD Ready resolution of 1,366 x 768 rather than a Full HD 1920 x 1080 pixel count, yet it manages to reveal such classic HD treats as individual blades of grass in the outfield and the weave in the players’ shirts.


The fact that these sorts of details are retained despite the 1080-line source image having to be resized to a 768-line image is impressive, especially as it’s done without the introduction of loads of nasty processing artefacts and noise. 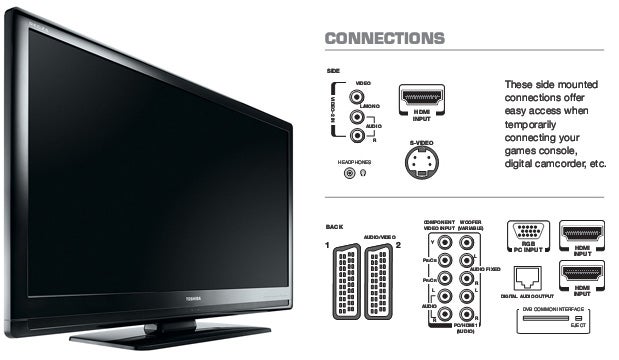 I was also pleasantly surprised on the sharpness front by how little HD images are affected by LCD’s traditional motion blur issue. In fact, I was scarcely bothered by it at all – even though, let’s not forget, I’m talking about watching a sporting event here, not some motionless news feed.


More good news with HD viewing concerns the 37CV505DB’s colour response. Notoriously tricky colours for flat TV technology such as the green of the Oval outfield, the blues of the England batsmens’ helmets, the tone of the players’ skin and the reds of the sponsorship logo all look surprisingly authentic – as well as vibrant and dynamic.


So dynamic do colours look, in fact, that they give a sense of some pretty credible black level response being on hand to give the colours a strong counterpoint to ‘bounce off’.


Shifting gear to a film, in this case ”There Will Be Blood” on Blu-ray, confirms that the 37CV505DB’s black level response is indeed pretty credible, especially for the TV’s price point. However, really dark scenes, such as the opener in the mineshaft, also reveal that the black level response is a good few notches down on the best LCD TVs out there today.


And so where parts of the picture should be a really inky black, they instead look rather cloudy and, as a result, are lacking in the sort of shadow details that give dark scenes real authenticity and a sense of scale.

Now that we’ve switched to Blu-ray, I should also say that the screen’s 1080p/24 handling is not – inevitably, really – the best. There’s some definite judder as the actors pass across the screen, to the extent that you may prefer to set your Blu-ray player to output 1080i instead.


Even with these glitches, though, the 37CV505DB’s HD performance still rates as good for its ridiculously low price point.


However, switching to standard definition you notice right away how much more noise there is in the picture. You would, of course, expect this to some extent. But the sheer aggression of the 37CV505DB’s approach to images means the MPEG and dotting noise in digital tuner feeds definitely looks more pronounced than we’ve seen it on the best standard def LCD performers out there. 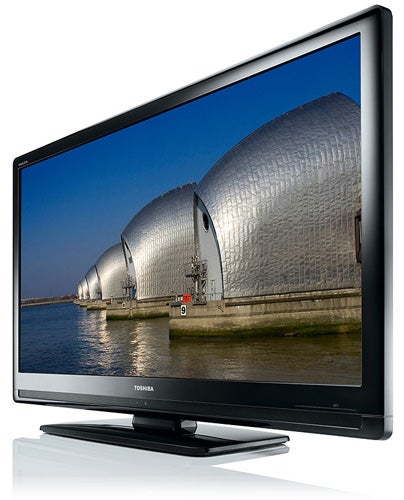 Calling in the 37CV505DB’s noise reduction systems can certainly smooth out the worst of these problems, but only at the cost of more softness in the image. Using the Movie picture preset can help too if you can live with the much-reduced brightness it results in. But ultimately, no matter what we tried we still couldn’t quite escape the feeling that with the 37CV505DB, as with other Toshiba TVs in recent times, the Active Vision LCD processing just isn’t quite as adept at upscaling standard definition as some rival systems.


The 37CV505DB is predictably hardly ‘hi-fi’ in the audio department. Its speakers can go surprisingly loud, I guess, and actually have quite a good knack of maintaining clarity with voices. But the rest of the soundstage during a loud action scene can get rather muddy, and the TV cabinet is prone to vibrating quite distractingly if the mid-range gets too overloaded.


By the standards of LCD TVs in general, Toshiba’s 37CV505DB is nothing particularly special. Put in the context of its extraordinarily low price point, though, it’s actually remarkably good value – so much so that it ought to appeal not just to the 37in market but to people who thought they only had enough money to afford a 32in!