Last year Toshiba caused a few geek hearts to flutter when it launched the Portégé R500. It was, as the company was always keen to point out, the lightest notebook in the world, weighing a mere 755 grams in its lightest configuration. By anyone’s standards it was impossibly svelte, but its claims, though true, were made somewhat hollow due to a number of issues. These included some rather dubious build quality, a disappointing screen and battery life that barely deserved the name. Fine, it was the lightest notebook you could buy, but that claim came at a cost.


Toshiba has now released its replacement, the Portégé R600, though outwardly the updated R600 looks exactly the same as the R500. Save for a matte black bezel surrounding the screen, the whole machine is finished in a metallic silver that’s durable and fairly easy on the eye, too. It might lack the glitz and glamour espoused by some, but this is a serious notebook for serious people and in this regard it’s a well considered and appropriate design. 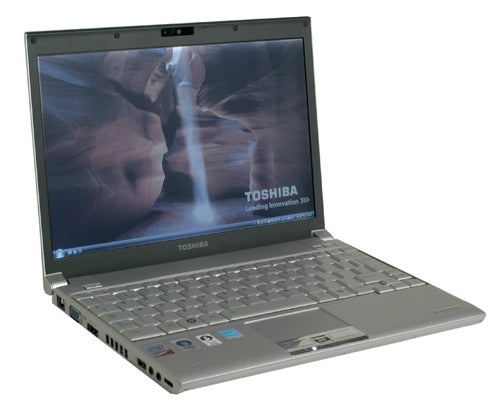 One thing that has changed, for the better we might add, is the build quality. One of our more damning complaints about the R500 was its often flaky build. Panels had altogether too much flex for comfort but more worrying was how, in some places, panels simply didn’t fit properly. Given its light construction some flex is unavoidable, as you can see in the video review, but on the whole the R600 is much improved in this department. 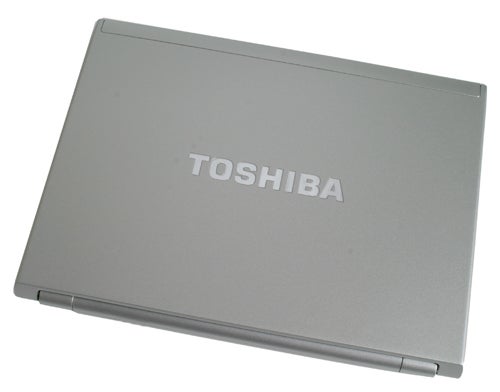 This improvement includes the keyboard and though there’s some flex here, too, keys have a reassuring depth and feel that ensures swift and error free typing. This is aided by a more or less faultless layout and the useful addition of Page Up and Down keys just below the Return key, making scrolling through large documents that bit easier. This said, we did sometimes find ourselves hitting these instead of the Shift key, but this is the kind of issue you’ll quickly learn to avoid over prolonged use.


Another important feature of the keyboard is its spill-proofing, something that’s less common than you might imagine. This is achieved through a thin absorbent layer that sits between the keyboard and the main body of the machine, soaking up minor spillages that can then be left to dry. This doesn’t make it a veritable duck to water, but does provide some peace of mind for anyone who is a little clumsy. 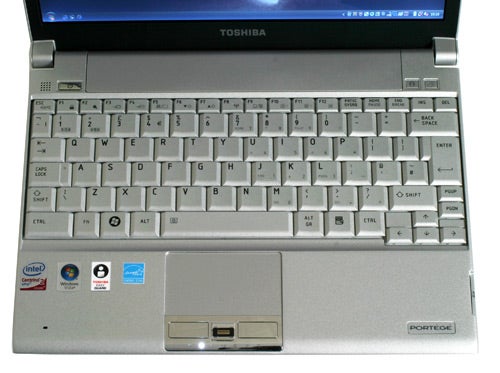 Below the keyboard is a perfectly serviceable touchpad and there’s a fingerprint reader wedged in between the faux-chrome buttons. This does make the buttons a tad on the small side, but it’s not a major issue. It might have been nice had Toshiba added a trackpoint in addition to the touchpad, since this is always a useful feature on a business machine, but given the space constraints we can understand why it hasn’t.

Another feature that remains more or less unchanged is the screen and it’s not for want of wishing it so. Though the transflective screen, which is designed to convert ambient light into viewable light for the screen, is a sound idea on paper, in practice it’s simply not very good. Turning off the backlight to make use of this feature shows you need to be in exceedingly bright conditions (i.e. outside with the sun on your back) for it to be at all useful; a situation few people find themselves in when working. 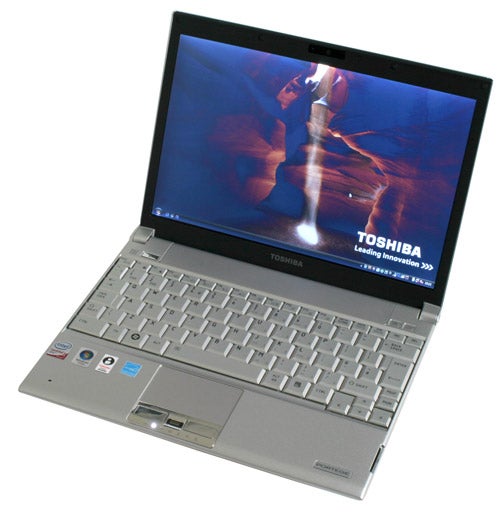 To add insult to injury, even with the backlight turned on the display on the R600 is pretty mediocre. Measuring 12.1in and sporting a native 1,280 x 800 resolution, it’s not as bright as other LED backlit screens, its colour production is dull and lifeless, there’s noticeable backlight bleed from both the top and bottom of the screen, and viewing angles are really quite poor.


In fact, even when looking straight on it can be a little awkward to find a screen angle that doesn’t result in some contrast loss at the extremities. Of course, to play devil’s advocate, this does mean it enhances privacy, but we’d sooner Toshiba dropped its transflective screen interest. A unique feature it might be, but there’s a good reason no other notebook manufacturer uses them and though it doesn’t render the R600 unusable, it’s a significant black mark against it.

When it comes to the basic feature set, however, the R600 can’t really be faulted. For connectivity you’ll find a VGA port, a combined eSATA and USB port (something we haven’t seen on any other ultra-portable) two more USB ports, Ethernet, a memory card reader and a 54mm ExpressCard slot. One could bemoan the lack of a digital video output, but it’s not as essential on an ultra-portable as it is on other machines and it’s nothing a DisplayLink USB monitor wouldn’t solve.


Inside things look just as good. This version, which retails for just under £1,700 inc. VAT, comes with the faster of Intel’s two ultra-low voltage processors, the dual-core 1.4GHz SU9400. It also sports 3GB of 800MHz DDR2 RAM and a 128GB SSD, so Toshiba is clearly not skimping on important features. This is further evidenced by the inclusion of integrated HSDPA, though this addition does result in a slightly higher overall weight of 813 grams, compared to the 755 grams of the original.

Other key features include Gigabit Ethernet and Intel Draft-N Wi-Fi and as this is a vPro certified machine, it can be integrated into a company’s existing infrastructures quite easily. Another adjunct of this is the addition of a Trusted Platform Module that provides secure encryption and authentication of data, something the UK government could learn a little about!

Also included in the price is a three year international warranty, another advantage the R600 has over the likes of the Sony VAIO TT and something we’d always expect from a business orientated notebook. Mind you, one thing you will probably want to consider is buying a higher capacity 5,800mAh battery, since this version of the R600 only comes with a three-cell 2,900mAh one.

This, we imagine, is largely to help achieve the headline grabbing weight, but it doesn’t deliver very good battery life. In the Productivity test the R600 ceased operation after two hours and 24 minutes, while in the Reader test the result was an equally uninspiring three hours and 32 minutes – significantly less than similar machines. Toshiba would argue these would be better were the backlight turned off, but as we’ve already demonstrated the transflective screen isn’t good enough to make this a reliable option.


As a result you’ll need the six-cell 5,800mAh battery that will cost you around £100, or less depending on where you look. This is exactly twice the capacity of the three-cell, so should deliver twice the performance and if you apply this theory to the results we obtained and the R600 would compare perfectly well to other ultra-portable notebooks. Moreover, even with the £100 added to starting price, the R600 remains pretty good value compared to the likes of the VAIO TT and ThinkPad X301, which makes it all the more galling that Toshiba doesn’t just include both batteries in the box.

Given the combination of a 128GB SSD and the faster of the two ULV processors we were expecting good raw performance from the R600 and, to the greater extent, it delivered. In our CPU limited in-house tests it proved quicker than both the Samsung X360 and the Sony VAIO TT, particularly in the video rendering test where it was around 15 per cent faster than the Samsung and 20 per cent faster than the Sony.


However, PCMark Vantage did show that the SSD in the R600, which is one of Toshiba’s own making, is significantly slower than that found in the Samsung X360 – producing a score of 9,324 against the Samsung’s 13,650. That’s a difference of just over 30 per cent and this does reflect in a slightly lower overall score. Arguably this does make the X360 slightly faster in general multi-tasking, since the Toshiba’s strength lies mainly in raw number crunching, but we wouldn’t say this is a definitive difference; the R600 is still responsive in general use and shouldn’t grind to halt unduly. 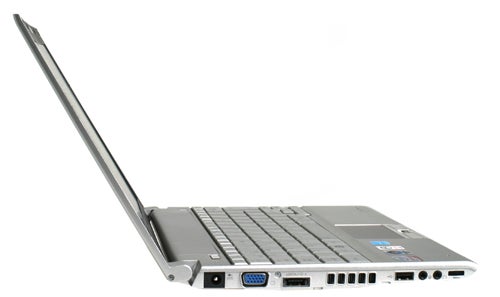 
Toshiba has made some important improvements with the R600, making it an ultra-portable you should definitely consider if you’re in the market. However, the transflective screen is still disappointing and you’ll need to factor in £100 for an extra battery, so it’s not quite a nailed on certainty just yet.