I’ve never been completely convinced by the Tablet PC concept. It may look good in medical dramas and sci-fi shows when characters busily tap away at tablet devices, but you have to remember one thing about that – they’re not doing anything! If you’ve ever actually tried to control a PC in portrait tablet mode you’ll be well aware that it’s far from a simple procedure. The other issue I have is that Tablet PCs aren’t particularly light either, so if you’re planning to spend your entire day wandering around work holding one like a clipboard, you might want to put some time in at the gym first. It’s therefore with some trepidation that I’m looking at the Portégé M700 – Toshiba’s latest thin and light Tablet notebook. 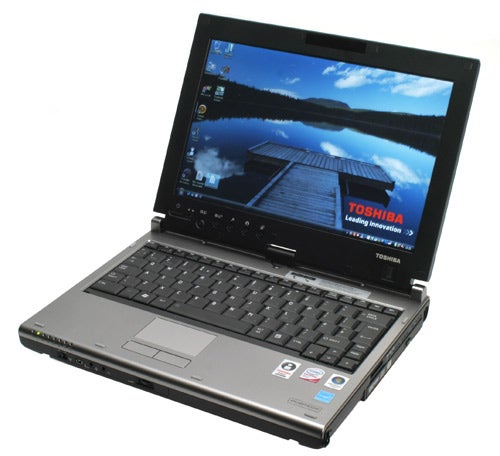 Before getting bogged down with the “tabletness” of the M700, let’s take a look at the notebook basics. What you’re getting is a 12.1in machine, that’s slightly heavier and bulkier than a non-tablet model would be. Toshiba quotes a weight of 2kg for the M700, and placing the machine on the TrustedReviews scales proved that estimate to be spot on. That’s pretty weighty for a 12.1in machine, especially when you consider that the last 12.1in Toshiba notebook I reviewed was the feather-like Portégé R500, which weighed in at only 755g! It’s a slightly chunky beast too measuring 305 x 239 x 37 (WxDxH). 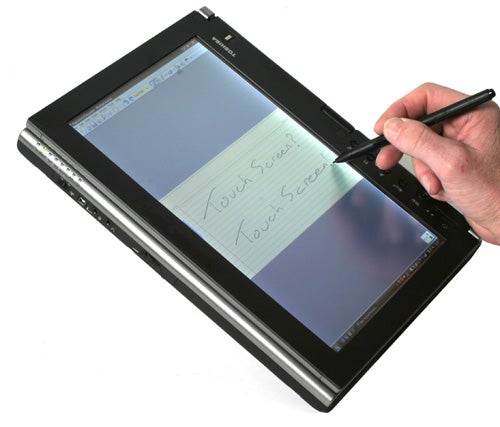 The screen sports a native resolution of 1,280 x 800, which is pretty much par for the course on a 12.1in display. What’s surprising is that the screen is reasonably bright, despite having both a touch-screen surface, and tablet digitiser pen characteristics. OK, so it’s not as bright as many other notebooks and lacks the high contrast coating that has become so popular of late, but for office use, which is where this machine is aimed, the screen is pretty good. If there’s one down side, it’s that the viewing angles are fairly narrow, but that’s unavoidable with a touch screen. 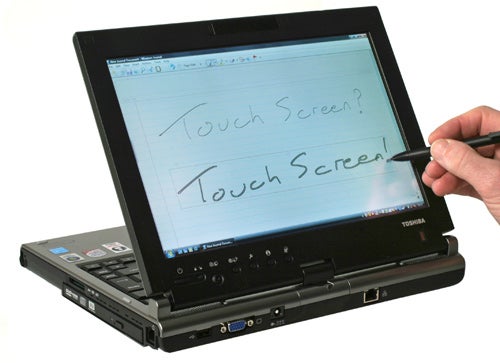 Keeping things in a notebook orientation, opening up the M700 reveals a somewhat disappointing keyboard. For some reason the keys feel smaller than they should be on a 12.1in machine, while the travel feels somewhat shallow and unresponsive. I found it hard to build up a good typing rate on the M700 as the keys just felt slightly dead under my fingers. Part of the problem is the excessive amount of flex exhibited by the keyboard, with large sections visibly flexing with each key press. On the plus side, the layout is good, with the Ctrl key in the bottom left corner where it should be, thus making keyboard shortcuts easy to manage.

Below the Spacebar is touchpad with a widescreen aspect ratio to match the display. The touchpad is very responsive and makes for accurate pointe manipulation. The right edge of the pad can be used to scroll vertically through web pages and documents, while the bottom edge will scroll horizontally. Below the touchpad are two large buttons, which sit flush with the wrist rest. 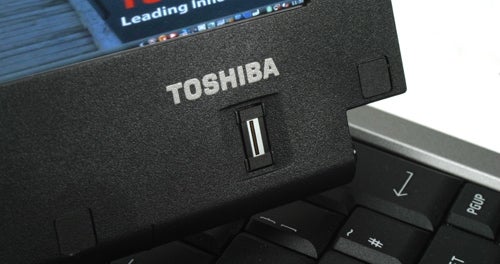 There’s a fingerprint scanner, but unlike regular notebooks that have said device on the wrist rest or between the touchpad buttons, the M700 has it mounted at a right angle below the screen. The reason for this of course, is that it’s designed to be accessed when the notebook is in Tablet mode and held in a portrait orientation. Also below the screen you’ll find the power button and an array of Tablet controls.


To enter Tablet mode you simply rotate the screen and then fold it flat against the keyboard. This allows you to hold the M700 like a clipboard and pretent that you’re diagnosing a patient, or scanning the surface of an alien planet. Seriously though, I know that there are Tablet users out there, and many Tablet devices ship into (and I hate myself for using this term) vertical markets. Ultimately you either need Tablet functionality or you don’t, but if you do, Toshiba has tried very hard to make the M700 an attractive proposition. 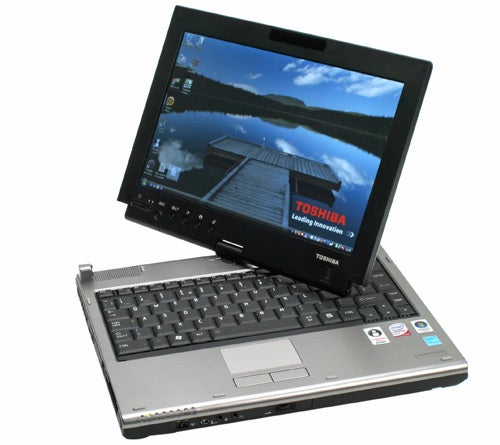 For ultimate Tablet flexibility, the touch screen allows you to tap and drag using your finger tip, but there’s also a digitiser pen nestling in the chassis. The screen isn’t as responsive as some that I’ve encountered, but armed with the pen, you shouldn’t have too much trouble getting to grips with the M700 in Tablet mode.


Driving the M700 is an Intel Core 2 Duo T7250 CPU, running at 2GHz. Now, although a 2GHz Core 2 Duo is more than up to most tasks you’re likely to throw at it, this particular version only has 2MB of cache as opposed to the 4MB seen on higher-end chips. Toshiba has been sensible enough to include 2GB of RAM as standard, with Windows Vista struggling to perform on anything less. Storage comes in the form of a 120GB hard disk, while an integrated DVD writer will allow you to backup or simply offload data if space gets tight. Graphics duties are taken care of by Intel’s X3100 integrated chipset, which should be more than enough for the business users that this notebook is aimed at.

There’s no denying that the M700 is brimming with connectivity. First up is Draft-N Wi-Fi, which obviously also supports 802.11b and g. This machine can also connect over the airwaves using its integrated Bluetooth adapter. Equally useful is the Intel Gigabit Ethernet controller, which will allow you to connect to a suitably equipped home or office network at lightning fast speeds. And if you really can’t find any other option, there’s also a 56k modem in evidence. There is a version of the M700 with built-in HSDPA, which carries a price premium of around £100.

Most of the space around the chassis has been well utilised. On the right you’ll find the DVD writer, although this is removable and could be replaced with a second battery, if you needed to work on the move for an extended period. Also on the right is the Tablet stylus, nestling in a spring loaded cubby hole – press the pen and it ejects, push it back in and it locks into place. Making further use of the right edge is an integrated memory card reader. The card reader supports SD, MMC, MemoryStick, MemoryStick Pro and xD cards. Despite Toshiba’s own spec sheet stating that the reader is only compatible with SD cards up to 8GB, I had no problem using a Kingston 16GB SD card in the M700, with the full capacity reported and usable as soon as it was inserted. Finally the Modem socket nestles next to the DVD writer.

The front edge is home to a volume wheel, a headphone socket, a microphone socket, a four-pin FireWire port and a hardware switch for the wireless adapters. The left side is populated by a brace of USB ports and a PC Card slot. The latter is a surprise, since most modern notebooks ship with ExpressCard slots. Finally at the rear there’s an Ethernet port, a third USB port, the power socket and D-Sub output for connecting to an external monitor.

Confirmation that Toshiba agrees that Tablet PCs are attractive to business users rather than consumers is the Centrino vPro branding. Intel’s vPro technology is offers the kind of functionality that IT managers used to dream about – remote management and diagnosis makes maintaining a fleet of PCs simpler than ever, while the ability to remotely quarentine a compromised machine, clean it and get it back up and running is nothing short of magic. Of course you have Intel to thank for all this extra functionality, but it’s good to know that Toshiba understands how important it is for a business platform.

When it comes to performance, the M700 isn’t going to blow you away, but it also isn’t likely to disappoint its target audience. I do feel that Toshiba should have specified a faster 4MB cache Core 2 Duo, which would have made the M700 a bit more swift, but even in its current guise it’s reasonably responsive. Toshiba quotes four hours 40 minutes battery life using MobileMark 2007, which is interesting considering that we couldn’t get MobileMark 2007 to run on the M700, despite trying many, many times. That said, having used this machine on battery power, that estimate is pretty realistic. 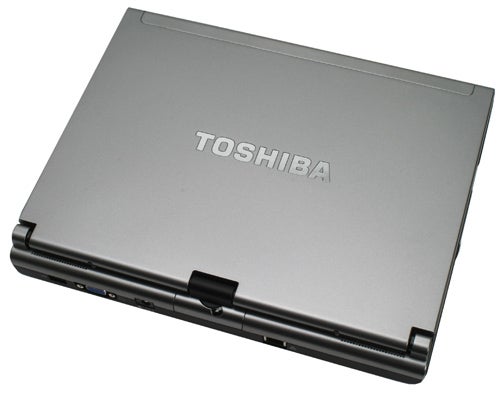 The three year international warranty also makes the M700’s business aspirations clear. After all, you wouldn’t want to be away at a conference, have your notebook die and then be unable to get it repaired until you get home.


Toshiba has also priced the M700 to sell with the machine available on the street for under £1,100. However, it’s worth remembering that you can pick up thinner and lighter notebooks for far less than that, but they’re unlikely to be vPro certified or Tablet compatible.


There’s no denying that the Portégé M700 is well specified and that Toshiba has priced it competitively for a fully featured Tablet device. However, it’s bigger and heavier then most 12.1in notebooks, and it lacks the solid build quality of the business behemoth that is the Lenovo ThinkPad. The keyboard is particularly disappointing, but if you’re planning to use it mostly in Tablet mode, that probably won’t bother you.


There’s not much that’s intrinsically wrong with the M700, but there’s nothing that stands out as particularly good either. This latest Portégé definitely hasn’t convinced me of the merits of Tablet computing, but to be fair to Toshiba, I doubt that anything could. 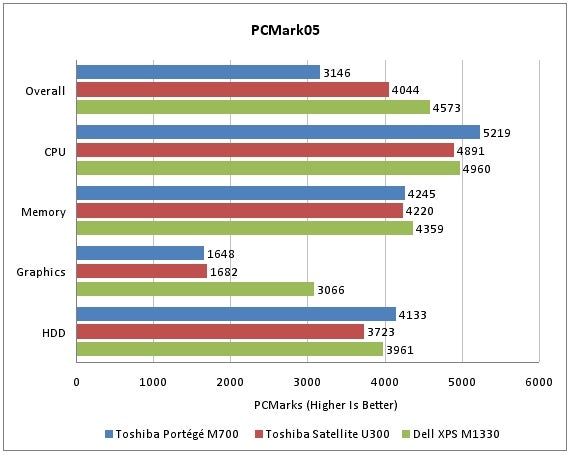