It’s difficult to think of a single major notebook manufacturer who hasn’t also brought out a netbook by now. Unfortunately, in their haste to get on the mini-mobile-PC bandwagon, many of them have sacrificed considerations like ergonomics. Initially, it would appear Toshiba’s NB100 netbook is yet another casualty of this trend, but let’s find out how it actually holds up in this and other regards. 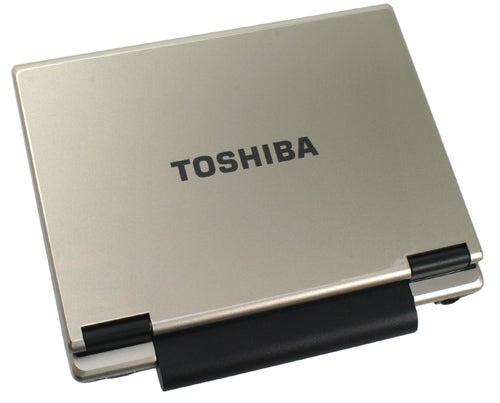 Toshiba offers several different versions of its netbook, being available with a choice of Ubuntu or Windows XP Home, 512MB or 1024MB of memory and hard drive sizes of 80 or 160GB. Of course, core components like an Intel N270 Atom processor running at 1.60GHz and Intel integrated GMA 950 graphics remain constants. There’s also a selection of colours available, though unfortunately these are tied to specific configurations.


Our particular model is the NB100-128, a Windows XP version which features a Champagne Gold finish and is configured with 1GB of RAM and a 120GB hard drive.

In terms of extras there’s not much here; you don’t get a carrying sleeve as with the Samsung NC10 or MSI Wind. What you do get is a helpful illustrated Quickstart guide, an extensive user manual and a Toshiba Recovery DVD including Windows XP Home Edition. Though the usefulness of this latter item with a machine that has no optical drive is arguable, it’s better to have it than not, especially considering external USB-powered DVD-Rewriters are only £50 these days. 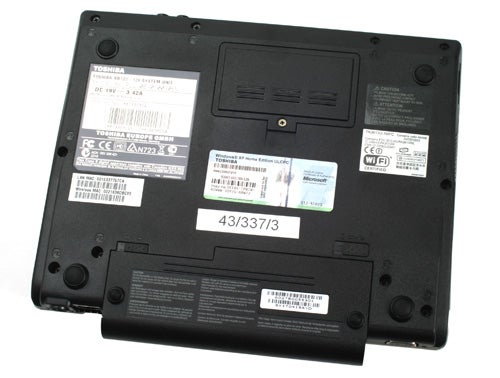 At 1048grams (rather than the 999grams Toshiba advertises), the NB100 still resides at the lighter end of the netbook scale. In terms of looks, it’s not quite as generic as most netbooks. It has a chunky two-tone design that’s reminiscent of Fujitsu-Siemens’ Amilo Mini and thankfully it’s just as solid, with excellent build-quality throughout. Uniquely, the base extends further than the lid and protrudes 1.5cm past its hinges. Its four-cell battery extends even further and can be used to carry or hold the netbook.


On the outside, the lid and a section of trim around the base are finished in the aforementioned Champagne Gold, which does look very attractive. It’s high-gloss but does an excellent job of disguising fingerprints. This is nicely offset by the matte black used for the rest of the machine and it’s good to see that Toshiba hasn’t given in to the temptation of making the palm-rests and other high-maintenance areas glossy.

Opening the NB100 up reveals a mostly matte black interior, with the small power-button and accenting around the sides and touchpad the only exceptions. To be honest, after the classy and relatively attractive exterior, the interior of Toshiba’s netbook looks plain and dull. This is not helped by the thick bezel around the screen with its integrated speaker grille, or the touchpad which thanks to being a slightly different shade of black than the rest makes the whole affair look somewhat cheap and toy-like. 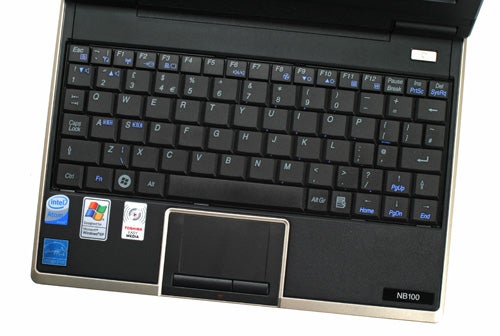 Another negative that becomes immediately obvious when opening the NB100-128 up is that the keyboard has tiny, cramped keys and our favourite bugbear: the right-Shift to the outside of the upward cursor key, just like on the original 7in Eee PC. Somehow, though, Toshiba has managed to make the keyboard even worse, with squishy and occasionally unreliable feedback.


Nor is the touchpad much of a step up. It’s quite a bit smaller than the off-black champagne-bordered section suggests and feels just as cramped to use as the keyboard. In a nice touch, Toshiba has made the main left-click button wider than the right one, but goes and spoils it by making both touchpad buttons a little thin and difficult to press. 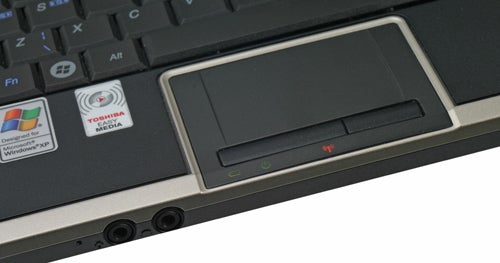 When it comes to connectivity things are pretty much par for the course. On the left are a single USB port and a lock slot. To the front are 3.5mm microphone and headphone connectors, with the built-in microphone located right next to them. Along the right are a memory card reader and second USB, while the back houses D-SUB and LAN ports.

The highly reflective 8.9in 1,024 x 600 screen is slightly above average. It’s bright, crisp and clear, and viewing angles are reasonable. But it does suffer from strong contrast shift, meaning tonal accuracy can be off no matter how ideally you’re positioned. However, if you can get past this it provides a pleasant entertainment and work experience.


Audio-wise, things take a few steps back again. Not that the speakers on most other netbooks are anything to write home about, but the Asus Eee PC has shown (or made audible, rather) how it can and should be done. Having said that, they’re perfectly adequate for an episode of your favourite TV show and there’s always the option of using headphones.

At the heart of it all lives the same 1.60GHz Intel N270 Atom processor as found in most other netbooks currently on the market, which is capable of handling everyday tasks but will struggle with things like decoding 720p video and other CPU-intensive tasks. 1GB of memory should be just about enough to keep Windows XP happy, though you will want to avoid heavy multitasking. So as with every netbook we’ve reviewed to date, everyday usage is fine but it obviously won’t keep up with notebooks when the going gets tougher.


The 120GB hard drive is average for a netbook, since there are plenty of models on the market that offer 160GB, but then again there are ones that only have 60GB. In terms of networking, Toshiba hasn’t been overly generous. Ethernet is of the non-Gigabit variety, Wi-Fi is only up to 802.11g and Bluetooth is completely absent. One point that’s remarkable is how quiet the NB100-128 stays during use. Most netbooks are fairly silent little things, but the Toshiba is practically inaudible even under load. Despite this, it never gets uncomfortably warm.

On the software side, the NB100-128 doesn’t leave you wanting for much. For office use there is a trial version of Microsoft Office 2007, or if you don’t fancy paying for a license a perfectly competent version of MS Works 9.0; other bits worth mention are a trial version of McAfee Anti-Virus, Picasa 2 picture editor and Toshiba DVD Player – again an interesting addition considering the lack of optical drive!


Toshiba could have scored a major win in terms of battery life if it had included a six-cell battery. However, it’s not fair to criticise the company too much, since the four-cell model provided is slightly better than the usual 3-cell affair found on the likes of the Acer Aspire One. And the NB100-128 makes the most of it too, clocking in at three hours and 20 minutes of video playback with screen brightness at 50 per cent and wireless turned on. 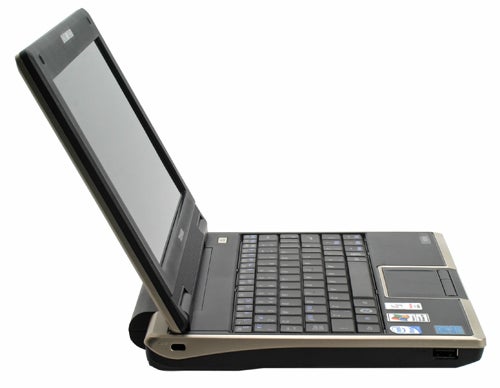 Not only does this beat other 8.9in netbooks like Fujitsu-Siemens’ Amilo Mini and Dell’s Inspiron Mini 9, but just like the former it has a Silent Mode, activated by pressing a keyboard shortcut. This lowers the CPU clock and voltage to make for an even quieter machine (as if that was needed) and more importantly also increases battery life. With this enabled, wireless off and screen brightness at a usable 20 per cent, the NB100-128 managed just less than five hours of use.

Finally, we come to value and market positioning, and this is where the NB100-128 really falls down. Though there’s a £30 cash back offer on the NB100-128 from Toshiba at the moment, this expires at the end of the month. Without this, the average price for this netbook online is £280. Like with the 8.9in Amilo Mini its keyboard is the main caveat – but at least in addition to being a good £20 cheaper on average, the better-looking Amilo has an ExpressCard slot and Bluetooth in addition to interchangeable covers (if that’s your thing), all of which more than makes up for the smaller hard drive and slightly less impressive battery.


In terms of features, however, the biggest competition at the 8.9in screen size is from Acer’s Aspire One. It might lose out in battery life, but has a much nicer keyboard. It’s also about £20 cheaper for a configuration which offers a bigger 160GB hard drive. 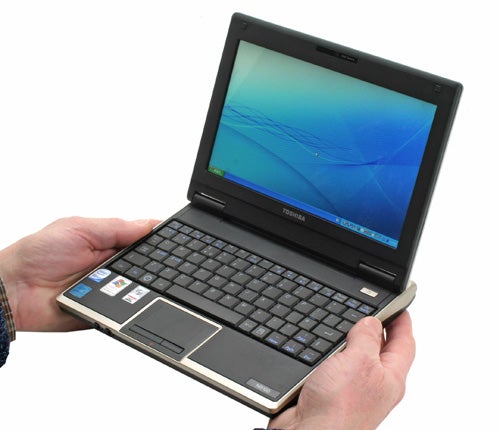 Toshiba’s £280 retail price is also getting awfully close to the £308 required to get you a Samsung NC10, which despite being slightly larger and heavier beats both netbooks in almost every way, scoring our coveted Editor’s Choice Award and Best Netbook of 2008.


Toshiba’s NB100-128 is a small, light and fairly rugged netbook which runs very quietly. But despite getting more out its four-cell battery than most, it can’t keep up with six-cell netbooks in the battery life stakes, looks dull once opened up and its awful keyboard combined with a below-par touchpad means using it might be more pain than pleasure. A higher price than the competition doesn’t do it any favours either.