The battle between Blu-ray and HD DVD will be won and lost in two areas: content and hardware prices. So far, both camps are doing pretty well on the former, but as for the latter HD DVD is winning hands down because the players still offer the best price-to-features ratio. The HD-EP30, the cheapest of Toshiba’s two third-generation players, continues this trend with a feature list you’d expect from an HD deck costing twice as much.

Toshiba has tweaked the design of the first two generations and come up with a deck that looks even slimmer and sleeker than its predecessors. It’s another all-black affair, but this time the buttons aren’t hidden under a flap and the disc tray has been moved over to the right. It’s a great look – understated yet achingly desirable.

Rear connections include all the basics, such as HDMI, component video, optical digital audio and composite video outputs. The HDMI output is version 1.3, but it can’t output high bitrate audio and doesn’t support the Deep Color feature specified in the v1.3 spec – both of these are reserved for the more expensive HD-EP35, which also adds 5.1-channel analogue audio outputs. However, the HD-EP30’s HDMI does support the Regza Link feature, which allows you to control the player and a compatible TV using just one remote (courtesy of HDMI-CEC technology).

The EP30 not only supports 1080p but also 1080/24p output, which delivers 1080p content at 24 frames per second – the rate at which most movies are filmed and stored on HD DVD discs – so as to deliver a more cinema-like experience. The deck also offers 1080p output at 50Hz, plus 1080i and 720p output, and it’ll upscale DVDs to any of these resolutions.


Unlike the majority of current Blu-ray players that now boast an out-of-date spec (thanks to the introduction of Profile 1.1 in November), HD DVD has been fully formed since day one, which means you’ll find an Ethernet port on the HD-EP30 so you can hook it up to your broadband router. Once configured, you can use the HD-EP30 to access online content from the web (found on discs like Blood Diamond) as well as download firmware updates.

On the audio front, the EP30 supports Dolby True HD, Dolby Digital Plus and the DTS core of DTS HD soundtracks, as well as Dolby Digital. But those of you with large digital media libraries hoping to play them on the EP30 think again – the deck doesn’t support MP3, JPEG or DivX. It does however play CD, CD-R, CD-RW, DVD-R and DVD-RW discs, provided they’ve been finalised.

One of the most annoying things about earlier HD DVD decks like the HD-E1 is how long they took to boot up, due to the fact they’re more like computers than DVD players. While this has clearly been improved on the HD-EP30, it still feels like an age before you finally start watching the movie. Also frustrating is that Resume Playback doesn’t work with all discs, which means you’ll have to go back to the start if you want to change something in the setup menu.


Otherwise, operating the HD-EP30 is a frustration-free experience. The remote is like a scaled-down version of the disappointing HD-E1 remote, compacted into a smaller space with the key buttons now much easier to find. This makes configuring and navigating the deck a smoother process, helped along by some eye-catching and well-structured onscreen displays. 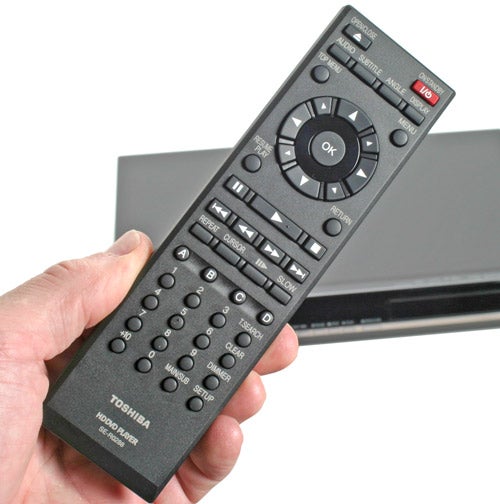 To test this deck’s video prowess we pulled a tried and trusted disc off the shelf – ”Harry Potter and the Goblet of Fire”. This is one of the best HD DVD releases to date, not only because of its beautiful 1080/24p transfer but also because the film itself is packed with scenes that show off the hi-def format to its full potential.


The good news is that the HD-EP30 does a fantastic job of handling this disc. Displayed on a Full HD, 24fps-capable TV set, the first thing that strikes you about the image is its intense sharpness. The deck resolves every speck of detail, right down to the texture of Harry’s jumper and individual strands of hair. Particularly stunning is Harry’s Triwizard Tournament scrap with the dragon, in which the CG creature’s features are resolved with pin-sharp clarity and the surrounding landscapes are blessed with a spectacular sense of depth. 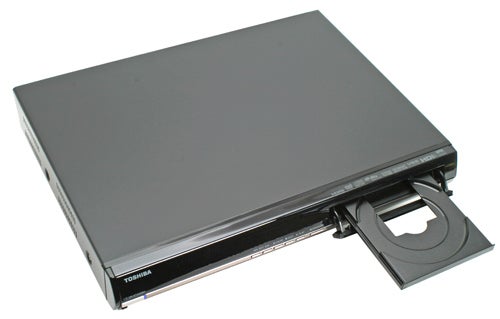 As a DVD upscaler, the HD-EP30 is impressive if not perfect. Cranked up to 1080p, ”Spider-Man 2’s” detail and colour levels are high, generating a picture that’s solid and sharp enough to fool casual onlookers into thinking it’s hi-def – but there are some jaggies and areas of pixel noise that slightly compromise the overall clarity.


If you want to take advantage of Dolby True HD or Dolby Digital Plus soundtracks, then you’ll need an amp with HDMI input and support for LPCM signals. But those of you without the necessary hardware rest assured that the deck offers superb Dolby Digital and DTS playback through a decent home cinema system, while two-channel playback of CDs sounds lively and musical. 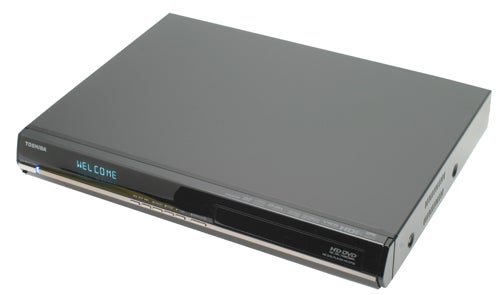 
There’s no question that the HD-EP30 represents superb value for money, boasting a killer feature list and awesome hi-def picture quality for around the £200 mark. The only question is whether you should opt for the pricier HD-EP35 or hold out for one of the forthcoming Profile 1.1 Blu-ray decks.


To be honest we don’t think there’s much call for Deep Color or HD audio bitstream output at present due to the dearth of compatible hardware, leaving 5.1 analogue output as the only real advantage of buying the HD-EP35 (besides any performance improvements it may offer).


And waiting for a Blu-ray Profile 1.1 player could be pointless, as the new specifications add nothing that you can’t already find on the HD-EP30. In fact, a LAN/Internet connection still isn’t mandatory! What’s more, none of these new Blu-ray decks is likely be half as affordable as the HD-EP30 – all of which makes Toshiba’s deck a much better bet.