Toshiba’s Gigabeat range has been around for a while but up to now it hasn’t really made its presense felt in Europe. With the F series of players it hopes to change that. Whereas the G20 was a small but very cute looking device the F series doesn’t have the same slick tech-geek appeal but more than makes up for it with a serious raft of features. 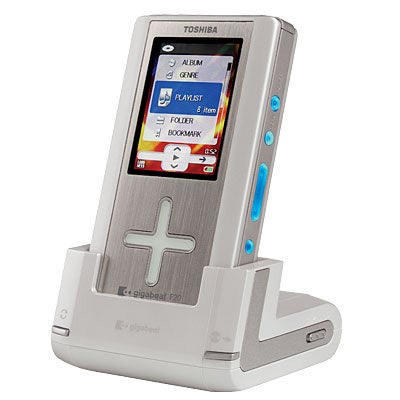 There are three capacity sizes with 20, 40 and 60GB models available in silver or brushed black aluminium finishes. Mac users are not catered for. Our review unit was a 20GB model making it slightly thinner than its bigger brother and weighing less at 160G. On the face of it, the 20GB model offers tremendous value. 20GB of capacity, a 2.2in 320 x 240 resolution colour display, a cradle and at 16 hours, slightly more battery life than the iPod, and all for a lot less than the 20GB Apple player. The latter also has a lower resolution screen and no dock. The 20GB Gigabeat doesn’t include a remote control but it is supplied with the 40 and 60GB versions.


In many ways Toshiba should have the iPod licked, but unfortunately due to some design frustrations, falls short. The player supports MP3, WMA and WAV. Inevitably there’s no AAC or iTunes support but it’s compatible with Napster and conforms to Microsoft’s Play For Sure campaign. 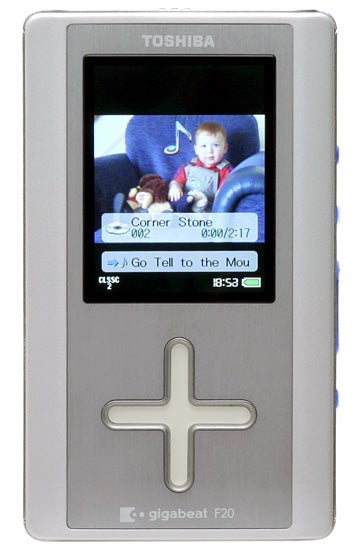 Toshiba’s slogan for the Gigabeat is, ‘Because Music is Just Better in Color’. This is of course, ridiculous; it sounds the same, but there is something to be said for the screen. As with mobiles, colour screens have been slow to appear on portable music players, and when the likes of the iPod photo appeared they did seem to be something of a gimmick. But once you’ve seen the colour screen you’ll be sold and you’ll soon be looking at the mono screen on your current player with disdain.

The biggest benefit is that you can view album art and images and once you’ve worked out how to get them on the device they do look great. Quite frankly though, I couldn’t work out how to get album art on the player. If the image was already in the files then it wasn’t a problem but for those that weren’t I was stumped.


What’s so strange is that the Gigabeat can be used with two music managers – either Windows Media Player 10 or Toshiba’s own strangely named Gigabeat Room. This is confusing as albums transferred over via Gigaroom are placed in a folder called, ‘Folders’, and can be accessed from there. They can also be accessed from the regular artist and albums list. The folder listing seems entirely unnecessary. With Gigaroom you can also transfer tracks directly to the Gigabeat without having to install them on the PC first and this function works as advertised. 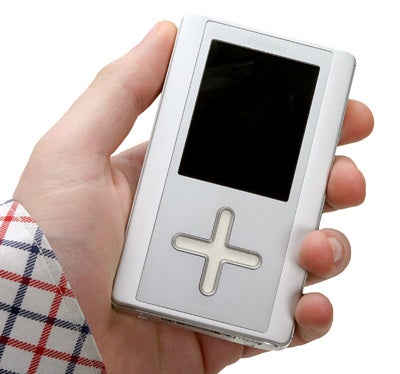 On the Gigabeat website Toshiba refers to dragging and dropping photos onto the player, but this wasn’t my experience. Instead I right clicked on the files containing the photos and selected ‘Transfer to Gigabeat’. According to the manual, only Gigaroom can be used for transferring images. This is odd because the images are stored in a folder on the device called pictures, but it does not resize them. I tried dropping an image into this folder on the Gigabeat, but it wasn’t recognised. This probably has something to do with creating an index of the files for use with the slideshow function. 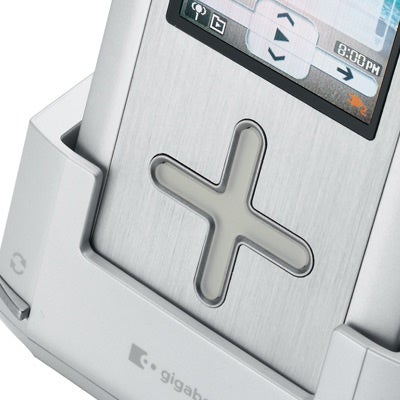 On the devices is a folder called Demo Files, which contains images set in a self contained slide show, with attached music. These were great, but unfortunately I couldn’t work out how to create these in Gigabeat Room, and there was no reference to them in the manual. Instead I just manually selected a track I wanted and then went off to the Photo folder. The slideshow can be set to wipe or fade between images, which are rotated to the right for optimal affect.

The player has a cross shape on the front that is the touch sensitive operating system. You simply touch upwards or downwards to adjust the volume. But if you press the menu button you can no longer do this, as the up and down then controls the menu. It would have made sense for there to have been some way of removing the menu and going back to the current song info, as there is with the iPod and Sony NW-HD5, but there isn’t. Toshiba seems to have been aware of this and has put a volume button on the side. This brings up the on screen volume, and you can then use the slider or the button on the side. So the volume operation doesn’t make a lot of sense, but at least the volume indicator looks great on screen. 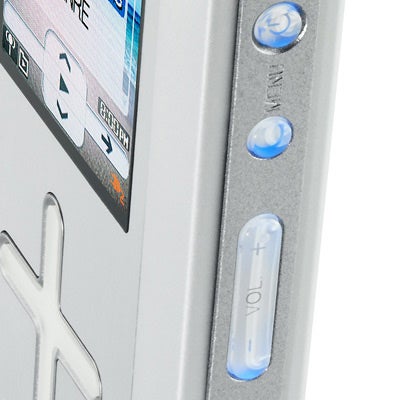 One feature I did like is the programmable button on the right hand side. By default, it’s set to display the album cover, (if one magically appears on the player), but I set it to switch between EQ settings. This is just what i wish my iPod had and is something I think Apple should copy from Toshiba for its fifth generation player.


Where Toshiba gets it unequivocally right is with sound quality. The Gigabeat just sounds fantastic. I ripped Madonna’s Music CD directly to the player using Gigaroom, using the maximum 192kbps WMA setting. It sounded, what I believe the kids describe as, ‘Phat’. Bass was fully extended and deep, treble was clear and there was plenty in the middle too. Sound quality wise then, it really put my third generation iPod to shame. 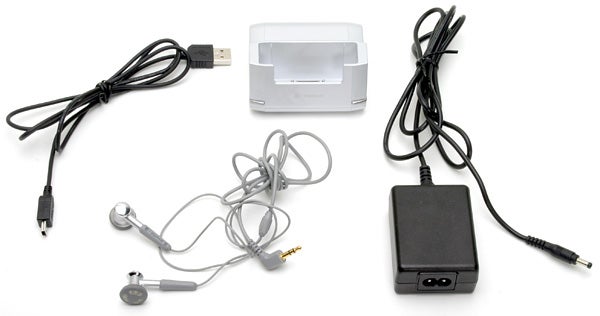 So would I but the Gigabeat? In a word no. The player has some great points but it’s so fundamentally flawed in operation and the accompanying software so confusing that I was left baffled at times.


Does it really have to be this hard to come up with a decent alternative to the iPod? Apple seems to have cornered the market by combining neat design with tightly integrated software that makes sense and isn’t a pig to use – a concept that seems to be beyond companies such as Sony and Toshiba.


In creating the Gigabeat, Toshiba clearly ticked off a list of iPod beating features without really thinking through how it was all going to be put together. The result is very much a mixed bag – good in some respects but otherwise a confusing, frustrating and ultimately disappointing product. It’s starting to get old saying it but once again, another promising contender tries and fails to topple the iPod.