If I challenged you to produce a list of makers of mobile phones I doubt Toshiba would figure too highly. The company does make mobiles, but these days it’s probably better known in the UK for its Windows Mobile toting handhelds.


I wonder how much the new G450 will change that. Certainly it challenges perceived wisdom about what a mobile phone should look like. And Toshiba is also really talking the phone’s functions up suggesting it is a ‘unique four-in-one innovative mobile device’ being a mobile phone, HSDPA USB modem, MP3 player and USB data storage device.


Putting the marketing aside, though, the G450 is certainly an eye-catcher. If you recall my review of the Liscio that mobile phone has a similar shape, but the G450 puts even the Liscio’s innovative design to shame. 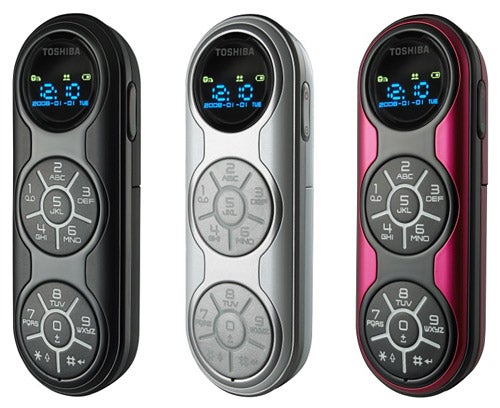 The tri-band HSDPA G450 is a small, rounded lozenge of a mobile measuring just 98mm tall, 36mm wide and 16mm thick. It is probably the lightest mobile phone I have ever come across at just 57g too.


The front fascia comprises three circles. The middle and bottom ones house the number pad, the upper one the screen. The number pad circles are brilliantly backlit white when the phone is switched on.


Now, this may sound as cool as the coolest thing you’ve ever seen, or you may be left feeling cold by the design. But whatever you’re feeling let me assure you that both screen and numberpad are the devil incarnate to use till you are accustomed to the unusual systems in place.


As far as the numberpad is concerned the two circles separate the number keys in a most unfriendly way. The 1 to 6 keys are in the upper circle, with 7-9, 0 and the * and # keys in the bottom circle. The positioning of the keys meant that it took a while to get used to both number dialling and texting. In fact throughout the review period I never felt fully happy with the idiosyncratic positioning.

Like the numberpad the screen is similarly odd. Its OLED display offers 96 x 39 pixels which makes it small by anybody’s standards. There are only three lines for display, and the top one is taken up with status information. This leaves just two for things like incoming SMS messages, so the phone isn’t exactly brimming with information delivery potential. In fact, you’ll need to scroll to read any SMS message of more than about five or six words.


And getting round applications and menus is a bit of a challenge too. You have to use the two side rockers, one on the left side of the phone and one on the right. These have a wide range of functions depending on where you are in the phone at the time. For example, the right rocker doubles to offer Call and End functions and turns the handset on and off.

The left is used as a volume rocker and profile changer as well as a shortcut to SMS creation and the music player, depending on where you press it and where you are in the phone. I’d choose dedicated buttons any day over having to remember all the various roles a single button can have. These buttons flank the screen, and I never did find an easy way of accessing both at once.


Despite Toshiba’s enumeration of what this phone can do – to recap; HSDPA USB modem, USB data storage and music playback – the G450 is also notable for what it can’t do.


There is no camera, which might come as a surprise to those looking at its £150 SIM-free price, and no mobile email either. The lack of the latter is probably a blessing in disguise given the small screen, but with mobile email pretty much supported by all phones above mid-range its absence is a surprise.

There is also no Bluetooth, no calendar, no voice recorder, no data conversion utility. In fact the only added feature of note is an alarm.


So what about those key features then?


Well, the HSDPA modem purports to be plug and play. So I put an Orange 3G SIM into the phone and used the supplied USB cable to connect it to a laptop. This starts the automatic installation of Toshiba’s Wellphone XT software, which enables you to make a connection to the Internet, place voice calls and manage text messages. It is all pretty straightforward, even if Wellphone XT itself isn’t the most engaging software to use.

When it comes to using the G450 for USB data storage you can use Wellphone or drag and drop through the Windows Explorer. Either way you have to put the handset into U-Disc mode before connecting it, which is something of a pain. Thereafter, though, it appears on your PC like a USB keydrive.


One of the file types you may want to drag across to the G450 is music files. The music player is actually pretty good once you get the hang of controlling it. Battery life is good too, with the phone giving me well over eight hours of music from a single charge.


But considering that Toshiba is proud of this phone’s ability to play music its 160MB of internal storage and lack of flash memory card slot isn’t very impressive. After all if you are a fan of portable music in general you’ll know that there are plenty of players and phones out there that have far greater capacities.


Innovative looking it may be, and it does function as a USB HSDPA modem without any trouble, but the G450 is woefully under-featured for a handset at this price. If you need a modem for your laptop I’d suggest you take a look at the standalone offerings from the UK network operators.