Despite Toshiba having such a strong presence in other areas of the audiovisual market, it has stopped making digital cameras and hasn’t focused much attention on camcorders – until this year. Following hot on the heels of the high-end Gigashot A100FE is another high definition contender. But where the Gigashot uses a capacious 100GB hard disk for video storage, the Camileo Pro HD relies purely on flash memory. So it’s much smaller, weighing just 180g, and could easily fit in a pocket. Its price is positively anorexic, too.


The Toshiba is somewhat reminiscent of Sanyo’s Xacti VPC-HD1000, with an upright format you hold like a pistol grip. All functions are performed with a thumb, which is relatively comfortable. However, where the Xacti has a bulbous lens which could ruin the cut of a jacket pocket, the Camileo Pro HD is only slightly fatter at the business end.

A 5-megapixel CMOS sensor captures the video, and despite Toshiba being very secretive about its physical size, it measures 1/2.5in. Still images can be shot at 8-megapixels (3,200 x 2,400) with interpolation, 5-megapixels (2,592 x 1,944), and 3-megapixels (2,048 x 1,536). In our testing, we found the 8-megapixel setting a bit pointless as it introduces grain which isn’t evident at 5-megapixels. Strangely, Toshiba hasn’t integrated any form of lens shutter or included a cover in the box, although there is a protective pouch. So care will have to be taken to avoid scratching the lens or getting greasy finger marks on it.


Like the Gigashot, the Camileo Pro HD eschews the dominant AVCHD standard. But where the Gigashot opts for HDMV instead, the Camileo relies on MP4. It doesn’t offer Full HD, either, or even the 1,440 x 1,080 of HDV, but shoots at 1,280 x 720 at its highest setting. It also uses a rather aggressive level of compression to reach 4Mbits/sec, with no other compression modes available, although the video is progressively scanned. Alternatively, you can choose DVD (720 x 576), VGA (640 x 480) and CIF (352 x 240) resolutions. Whichever setting you select, the Camileo is limited to 30 frames/sec, which will be great for YouTube but not so good if you want to convert your footage to DVD for use in 25 fps Europe.

Out of the box, the Camileo Pro HD comes with 128MB of memory onboard, and only 90MB of that is available for storage. That will be enough for just three minutes of video in HD mode, so you will want to make use of the SDHC slot. A 4GB card would hold well over two hours of footage, however, and you can pick those up for £10 these days, as even a Class 2 model can deliver the requisite 4Mbits/sec data rate. The Camileo can also act as a sound recorder. But whereas audio is captured at 48kHz with 128Kbits/sec AAC compression when in HD video mode, standalone sound recording is in WAV format using 4-bit, 11kHz stereo, at 88Kbits/sec. Great for dictation, not so good for bootlegging your favourite band’s live performance.


The Camileo Pro HD isn’t exactly full of options for the enthusiast, either. You wouldn’t expect features like a lens ring for manual focusing, an accessory shoe or microphone on a camcorder aimed so squarely at the pocket. It does have a headphone minijack, with headphones supplied, but this is primarily for use with the voice recording function. There isn’t actually any facility for manual focusing at all – only autofocus is available. The closest thing is the Macro mode, which enables focusing on objects as close as 5cm. 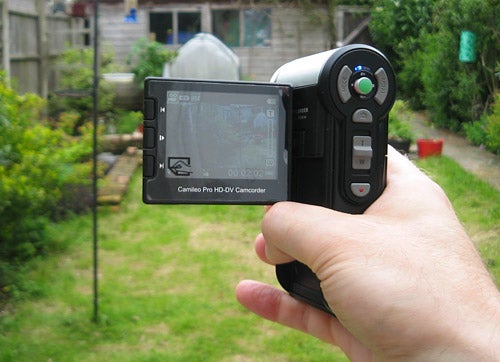 Although there is a function joystick, it doesn’t access a menu of frequently used functions, as with Canon and Panasonic camcorders. Instead, pushing it up toggles macro mode, pushing it right switches white balance settings, and pushing it left changes modes for the still image flash. Pushing down turns on the built in LED video light. White balance options include fully automatic mode, plus sunny, cloudy, fluorescent and tungsten presets, but no manual configuration.


Any other settings require a trip to the full menu. But even then the options are limited. There’s an exposure control with increments from -2 to +2 and a nightshot mode, which does improve colour in low light, but at the expense of frame rate. You can also choose between a couple of digital effects, for black and white and ‘classic’ (old movie). However, the Camileo lacks most of the usual user controls found in even low-end camcorders from other major brands. There is no shutter control, no manual focusing, and not even scene modes to call upon. There is at least a setting to counteract flicker caused by 60 or 50Hz lighting and TV screens. The lack of features won’t worry the intended audience, but this is no camcorder for the budding movie-maker.

With the Camileo Pro HD’s lack of features and low price, we weren’t expecting particularly impressive video quality. In good light, however, the results are quite passable. Reds and orange are a little too heavily saturated, and bright regions blown out, but there is a reasonable level of detail. The zoom is very slow and the exposure control also sluggish, with a small but noticeable lag when adjusting to new lighting conditions. The Toshiba doesn’t acquit itself so well in poor illumination, either. In a room lit with a single 100W tungsten bulb, the image is very dark, even with exposure on maximum. The level of grain isn’t that high, but it’s clear why the Camileo Pro HD has a built-in video light. Overall, though, video performance was better than we were expecting for the price. 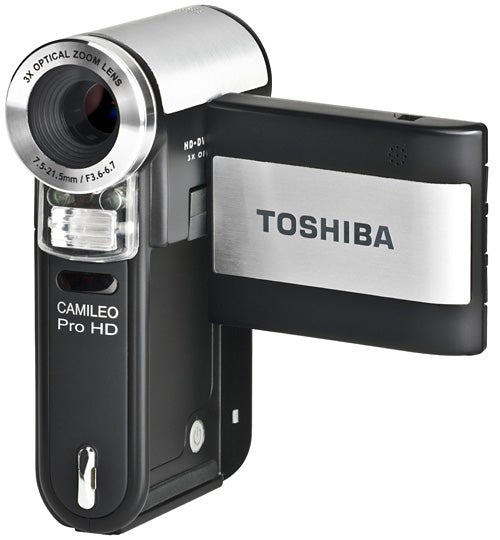 For editing, a regular USB 2.0 connection is provided to drag clips onto your PC. Since the Camileo records its MPEG-4 H.264 video in MP4 format, however, rather than AVCHD, the footage is not as widely supported in editing applications. CyberLink’s PowerDirector 7 had no trouble coping with it, but neither Pinnacle’s Studio Plus 11.1.2 nor Ulead VideoStudio 11.5 could import the files. Adobe Premiere Pro CS3 thought the MP4 files only contained audio. Toshiba includes Nero 8 Essentials, however, which can at least burn footage to disc.


If you want to watch your video on a TV, a minijack is available for analogue video output, with a cable supplied for composite video and RCA audio. For HD, a second minijack works in tandem with a second cable, offering component analogue video connections.


The Camileo Pro HD’s lack of features and poor video performance in non-optimal conditions mean it doesn’t really warrant the ‘Pro’ in its name. But then you’re not paying anything like a Pro-level price, either. At under £150, the Toshiba isn’t far off a compact digital camera. Yet it can shoot much better video than any still image snapper or mobile phone. So whilst this isn’t the camcorder to kick-start your own videomaking business, it’s exceptional value for shooting video destined for YouTube.