Toshiba may not have won any prizes for the image quality offered by its camcorders just yet, but it’s certainly competing well on price. The Camileo H10 provided 720p shooting for less than £150. Now Toshiba raises the value stakes yet again with the P30, which promises 1080p shooting for a similar amount. 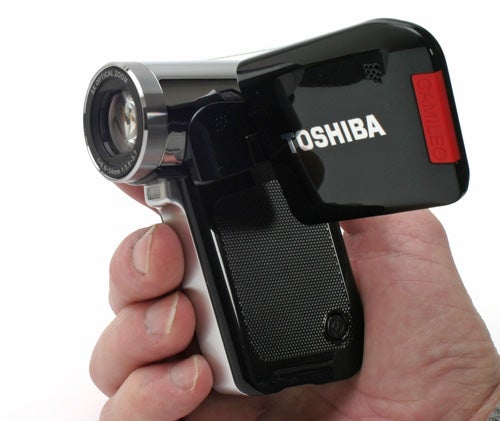 Unlike the H10, the P30 uses a palmcorder format, and it’s remarkably tiny, too. It weighs around 160g with battery and memory card, and measures just 104mm along its longest edge. These proportions may not be quite as small as the new breed of pocket Internet camcorders such as the Creative Vado HD, so it’s not quite trouser-friendly. But it wouldn’t ruin the cut of a jacket, and Toshiba supplies a handy pouch for protection. This is particularly useful as, bizarrely, Toshiba has continued its recent trend of not including a lens cap, so you better be careful not to scratch or get dirt on the optics. 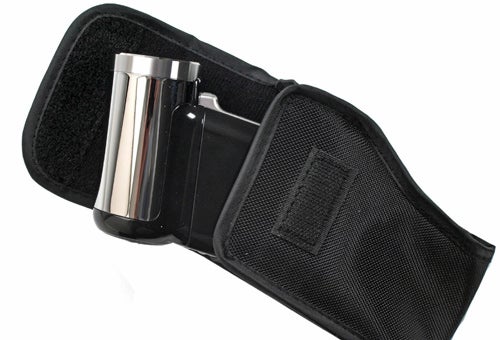 Toshiba isn’t as detailed about the internal specification of its products as some other manufacturers. The sensor is a 5-megapixel CMOS, but there’s no information about its size. The high resolution allows the P30 to perform its party trick of shooting 1080p video. This is recorded with 29.97 progressive frames a second (effectively 30fps), but the native resolution is anamorphic 1,440 x 1,080, like HDV and the initial versions of AVCHD, rather than 1,920 x 1,080 Full HD. There are also QVGA, VGA, WVGA 60, and 720p HD shooting modes. 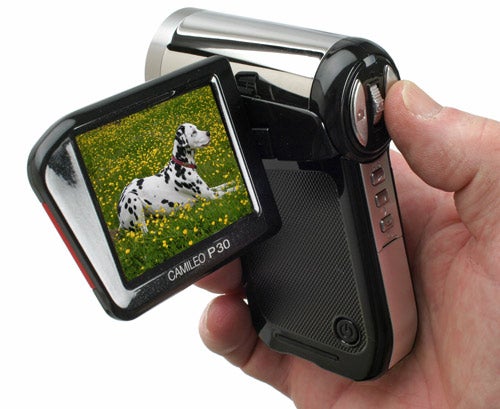 The Camileo also promises 8-megapixel still images, using interpolation. The actual resolution is 3,200 x 2,400, which isn’t quite 8-megapixels. If you want to stay within the native resolution of the sensor, a 2,592 x 1,944 option is available.


The P30 does include a small amount of built-in memory, but this 96MB complement is only going to be sufficient for a couple of minutes of footage. Footage is recorded as H.264 MOV files, and the 1080p mode uses a fairly miserly 8.58Mbits/sec, so a 1GB SD card will be enough for around 16 minutes of footage. With 8GB SDHC cards costing around a tenner these days, storage for a couple of hours of footage won’t break the bank. 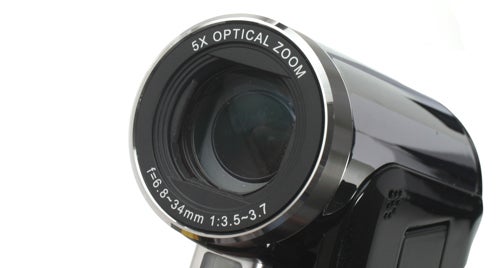 Features are few and far between, however. There’s a 5x optical zoom. A small LED video light is built in, but it’s pretty weak, proving ineffective much beyond about 1m. This also doubles as the flash when in digital photo mode, and it’s not much more effective here either. At least it has its own control button on the rear, making it easy to enable.


Manual settings are particularly scarce, however. Aside from a macro mode, you can alter exposure in seven steps from -1 to +1 EV, and that’s it. There is no manual focusing and no control over shutter speed. Scene modes are on offer, but Toshiba has bundled digital effects in the same category. So alongside Night mode and Backlight compensation are Black and white, and Negative effects.

Amazingly, image stabilisation is only available when shooting at 720p HD resolution or lower. Presumably, this is because it is of the electronic variety and the circuitry can’t cope with the data rate of 1080p. It’s a rather grave omission, even considering this camcorder’s low price. 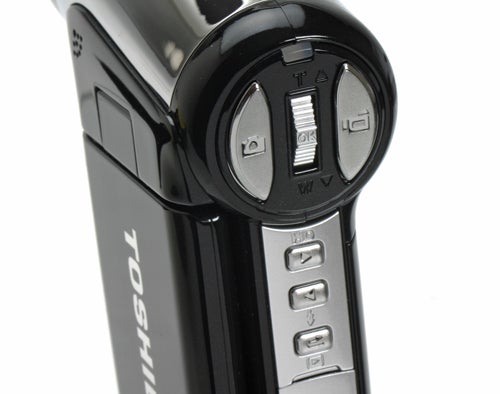 With sufficient light, the P30 does a reasonable job. However, the lack of any form of image stabilisation in 1080p mode is very noticeable. The very aggressive compression further accentuates this. The top-end models from Canon and JVC are now using H.264 encoding with nearly three times the data rate used here. Compression artefacts are quite noticeable with the Toshiba, particularly ghosting in fast motion. Colour fidelity isn’t too bad, but the P30 also has trouble resolving detail in areas of shadow. 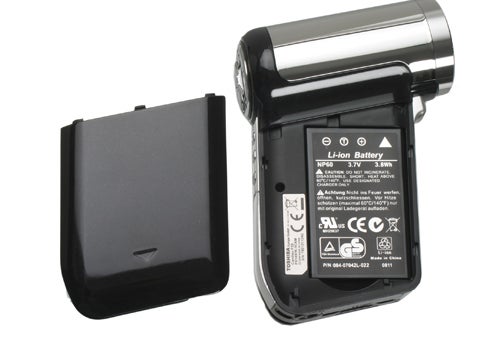 Overall, whilst performance is well behind most Full HD camcorders we’ve tested, footage shot in decent lighting is just about adequate to keep the £150 price feeling like a bargain. However, in low light the Camileo P30 is one of the worst performers we’ve tested. As illumination drops the whole scene takes on a red hue, and most details are lost. Darker areas end up totally black. Indoor shooting under poor artificial light is something consumers often want to do, and the P30 is sure to disappoint in these conditions. 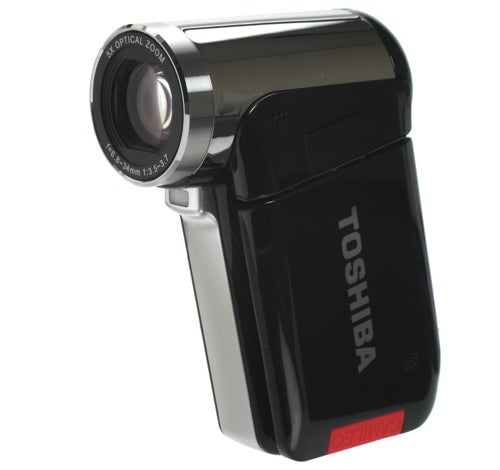 Similar statements apply to the quality of still images. With virtually no access to manual settings, the P30 relies on the lighting conditions. So in decent illumination the shutter speed is high enough for a reasonably sharp image. Photography in lower light is much brighter than the video, but pictures will only be clear if you hold the camcorder very steady and shoot stationary objects. Otherwise, the image will be extremely blurry due to the low shutter speed, making them effectively unusable. The flash doesn’t help very much here either. 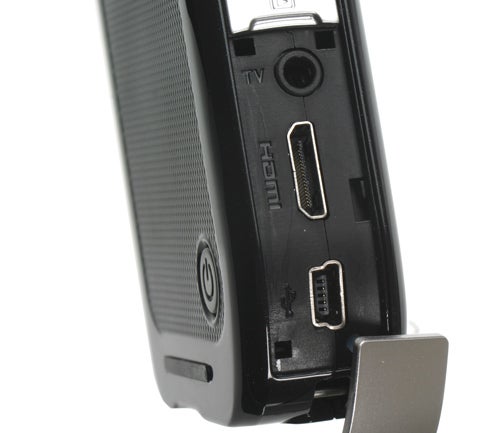 The MOV-based video files will also be less compatible for editing on a PC, as this is a Mac-oriented video format. But at least connectivity options are relatively comprehensive. The IO ports lurk behind a silver panel on the rear of the P30. Aside from the USB port for PC hookup, there’s a mini-HDMI connection and a minijack combining composite video and RCA audio. Toshiba includes a mini-to-standard HDMI cable in the box, too, so you won’t need to buy an adapter to watch your footage on an HDTV. 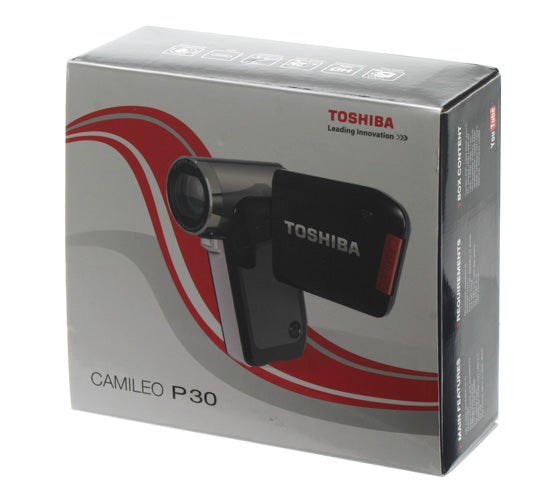 
The prospect of 1080p shooting for £150 sounds too good to be true. Unfortunately, in the case of the Toshiba Camileo P30, it is a bit of a pipe dream, with low-light performance the main deal breaker. Although image quality in the best conditions is acceptable for the price, if you want a cheap camcorder to capture a few family moments, you would be better off avoiding the HD buzzword and sticking with a more dependable standard definition model. JVC’s Everio GZ-MS120 or MG330 will produce much more consistent results, even if they can’t boast the pixel resolution.