Toshiba has made massive improvements to the onscreen menu system on this year’s players, making them more modern and user-friendly. Previous models have relied on dull generic displays but these fresh, eye-catching menus have Toshiba’s personality stamped all over them. 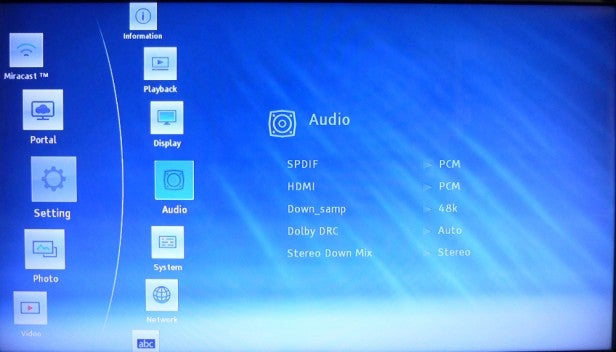 The Toshiba BDX2400 gets off to a flying start with an initial setup wizard, which sets the OSD language, HDMI output resolution and aspect ratio. After that, the first screen you encounter is the newly designed main menu, set against an eye-catching bright blue background. An arc of icons comes in from the left and rotates to display the desired option. Highlight one and a second arc appears to the right, eventually leading to a list of options for that category. It’s unusual but intuitive.

In the first row of options are Music, Movie and Photo (which let you jump straight to content stored on USB drives), plus Setting, Portal and Miracast (which isn’t even supported on this model). 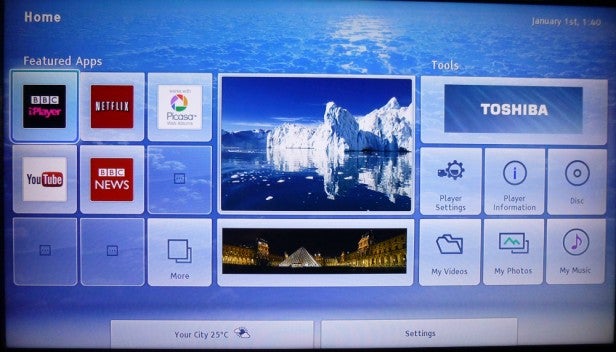 In Toshiba’s cloud portal you’ll find a range of internet apps and ‘Tools’, which basically just repeats what’s in the other main menu (in fact, when you select one it actually takes you back to the main menu). The layout is gorgeous, with icons neatly arranged against a backdrop of a blanket of clouds (see what they did there?).

It’s slick and stylish, although most of the panels are redundant, such as the images of an iceberg and the Louvre in the middle. You can select them but they don’t do anything. Similarly the tab at the bottom saying ‘Your City 25ºC’ hints at some sort of weather widget, but it doesn’t do anything either. When you select it a dialogue box says ‘This service will be available soon’.

Also, when we selected the ‘More’ option in the Apps section, we expected to find lots of other apps to download but sadly the selection is currently limited to five. Still, even though parts of this menu feel like work in progress, it’s still a vast improvement on Toshiba’s past online offerings.

Delve into the setup menu and you’ll unearth all the usual Blu-ray installation options, as well as a Video Adjust menu that lets you tweak the levels of brightness, contrast, hue and saturation in the picture. A separate Sharpness option offers a choice of Low, Mid and High.

It’s a shame Toshiba couldn’t have maintained this attractive design across the entire GUI. The USB playback menus are a step backwards, using a bland grey box in the middle of the screen and displaying content in basic lists. The On Screen Control (OSC) menu – a little box that provides information about the disc being played – is the sort of menu Toshiba came up with when its first DVD players came out.

The plasticky remote is also rather uninspiring, but proves easy to use thanks to its logical button layout and clear labelling. The direction pad, playback controls and various menu keys are helpfully placed. Despite the glut of buttons at the bottom and top it doesn’t feel cluttered. Confusingly there are two buttons labelled ‘Home’ but they both do the same thing so there’s no harm done.