The BDX2100 is the second Blu-ray player launched by Toshiba since the well-publicised demise of HD DVD. It’s the successor to the BDX2000, a decent budget deck that we reviewed towards the end of last year and continues in the range. The BDX2100 is actually a stripped down version of its predecessor, reflected by a cheaper launch price that dips down to under £100 online – the sort of outlay that might make procrastinating buyers finally bite the Blu-ray bullet.


Once again Toshiba decorates the deck’s fascia with jutting angles and a deeply sexy gloss black finish. The wafer-thin disc tray, sparse buttonry and tiny LED display keep the front panel looking clean and minimal. Look towards the bottom right-hand corner and you’ll spot a USB port, which replaces the SD card slot found on the BDX2000 – a wise decision too, as it allows you to connect a wider range of devices.

However, there are fewer connections on the back than you’ll find on the BDX2000, leaving only a basic selection. You get HDMI v1.3, composite, coaxial digital and analogue stereo outputs, as well as an Ethernet port. The BDX2000 additionally features component video and optical digital audio output, but with HDMI handling the crucial AV duties their absence is no great loss. The lack of multichannel analogue outputs might leave you in the lurch if your AV receiver lacks HDMI inputs, but it’s hardly surprising at this price.


More disappointing is that the Ethernet port’s talents are limited to downloading BD Live content from the Internet. Toshiba has introduced a media streaming feature into its latest TV range and it would have been great to see a similar feature included here. Most of Toshiba’s big-name Blu-ray rivals boast DLNA PC streaming functionality (Samsung, Sony, Panasonic, LG), although admittedly these companies have had longer to develop their players and most of them are more expensive than the BDX2100.

Toshiba’s unashamedly no frills approach also means there’s no 3D compatibility (hence the HDMI 1.3 port over the new v1.4), no access to web services like Panasonic’s Viera Cast and no Wi-Fi support, either built-in or using a USB dongle. In fact, there isn’t even any built-in memory for BD Live downloads, which means you need to connect a USB storage device of at least 1GB – and with only one USB port on the front, you can’t hide it away discreetly.


All of this would be perfectly acceptable if the BDX2100 was considerably cheaper than its peers, but search online and you’ll find Sony’s BDP-S370 selling for a similar sub-£100 price tag, a player equipped with BRAVIA Internet Video, DLNA networking and support for an optional wireless LAN adapter.


However, the BDX2100 isn’t completely devoid of features. The USB port on the front lets you play digital media from storage devices and the list of supported formats includes DivX, MP3, WMA, JPEG, M4A and MKV, plus AVCHD from Blu-ray discs. That’s not a bad list for the money and it’s particularly nice to see Toshiba adding MKV to the list.

Like all Blu-ray players, the BD2100 will also output Dolby TrueHD, DTS HD Master Audio and the other HD audio formats in bitstream form. The BDX2100 can also output Blu-ray discs at 1080/24p, which is good news as you’ll see movies as they were intended, hopefully without any frame conversion judder. And despite Blu-ray being this deck’s raison d’etre it gives your DVDs a good home, tarting them up to 1080p (as well as 1080i and 720p) before sending them to your TV. But it’s a pity there’s no Resolution+ processing on board, which has produced some terrific results on the company’s upscaling DVD decks.


The BDX2100 boots up in 15 seconds and loads ”Terminator Salvation” with similar alacrity, taking 37 seconds to start playing the Sony Pictures logo. Some players have taken almost two minutes to load the same content.


An attractive Toshiba splashscreen greets you after turning on the player. The deck’s Home Menu abandons the BDX2000’s interface for a fresh new design, using full colour graphics and a fancy new font. The pages are nicely sized, logically structured and respond speedily to remote commands. It’s by no means as slick or attractive as Sony’s Xross Menu Bar or LG’s stunning interface – it’s like Windows XP to their Windows 7 – but it’s a huge improvement on previous Toshiba efforts.

There are a some nice surprises buried in the setup menu too. Under display settings, you can adjust all the usual stuff like resolution and aspect ratio, but these are joined by more advanced Video Processing and Motion Video Processing submenus. The former contains the Video Adjust menu, which lets you set your preferred levels of brightness, contrast, hue and saturation, plus a choice of sharpness settings (high, medium or low).


Under Motion Video Processing is a choice of picture presets: Standard, Vivid, Cinema and Custom. The Custom setting allows you to make further changes to brightness, contrast, hue and saturation, but adds CTI (Colour Transient Improvement) to the list, which aims to reduce the appearance of colour banding. With Custom mode selected you also get individual brightness, saturation and hue settings for each colour in the picture (red, green, blue, yellow, cyan) while a three-stage noise reduction mode is available for any picture preset.


This level of picture tweakery really is unexpected at this sort of price and very welcome indeed, but the two-pronged approach leaves you a little unsure about what processing has been applied. For example, if you’ve altered the picture in the Video Processing menu, the changes affect all of the presets in the Motion Video Processing menu – including Standard. There appears to be no ‘neutral’ setting that shows the picture in its native state, which might upset video purists.


It’s also difficult to see how your changes will affect the movie as you have to stop playback to access the setup menu, and using the background splashscreen to gauge it isn’t ideal. Also, the Custom preset doesn’t save your settings, returning to its default parameters when you switch to a different preset.

Elsewhere there’s a couple of useful displays that can be called up during playback. The OSC menu lets you change the audio track, check the bitrate and activate any available BonusView content, while the Display button shows the disc details in a banner at the top of the screen.


All of these options are controlled using a slim, ergonomically-shaped remote. Its button arrangement is generally sound, especially the disc playback and menu direction keys placed conveniently under the thumb. The rest of the buttons are clearly labelled. 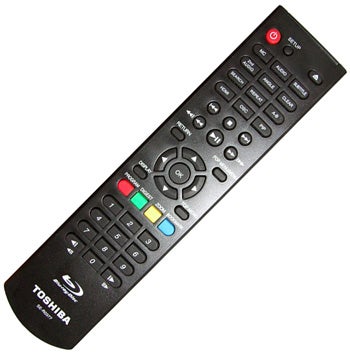 Adjust the processing correctly using a suitable calibration disc and the BDX2100 produces some excellent pictures. It makes ”Watchmen” on Blu-ray look terrific, imbuing the movie with pure, radiant colours (check the yellow in the smiley face logo), bucketloads of detail and excellent contrast – the opening shots inside The Comedian’s darkly-lit apartment look impressively rich and solid.


The deck renders textures superbly and there’s no noise or colour banding in the picture. Camera pans and fast motion stay smooth at 1080/24p. DVDs upscaled to 1080p look punchy and natural even without Resolution+, although there’s a little more noise in the picture than we’d like.

Channelled to a decent sound system over HDMI, the BDX2100 makes HD movie tracks sound spectacular, but its run-of-the-mill music performance means you shouldn’t chuck out that CD player just yet.


Digital media files are accessed from the easy-to-use Media Center menu, which displays a folder list on the left and current file details on the right. We connected a USB stick containing a variety of files and it played all of the supported formats smoothly, but WMA files didn’t even appear on the menu.


The BDX2100 is a basic Blu-ray player, lacking the sort of cutting-edge features found on the latest players from Sony, Panasonic, LG and Samsung. This no-frills approach is normally justified by a bargain basement price, but unfortunately for Toshiba you can find some of its more sophisticated rivals for around the same price if you shop online, such as the Samsung BD-C5300 or Sony BDP-S370.


But that doesn’t necessarily make the BDX2100 a bad machine – far from it. Picture quality is impressive, backed up by an unusually wide range of image tweaks, plus disc loading is fast, the new operating system looks great and the USB port is a welcome addition.