While rivals were proudly unveiling their debut 4K screens at IFA, Toshiba was the only mainstream brand showing off its second generation of 4k TVs. For hot on the heels of the brand’s groundbreaking – if flawed – 4k 55ZL2, Toshiba has revealed that it’s launching not just one new 4k screen but a whole range of them.

Due to roll out in the first half of 2013 (Toshiba wouldn’t be pinned down on any more precise dating than that), the new 4k screens will range in size between 55in and 84in. Not surprisingly, it was the 84in model that Toshiba chose to show on the IFA floor.

Hey good looking
And a fine figure of a TV it looks too. For while Toshiba was at pains to stress that the design wasn’t finalised, it was a gleaming picture of TV elegance with its burnished metal finish (show in both silver and black versions). We suspect Toshiba’s collaboration with the Jacob Jensen Design Studio is in play here. 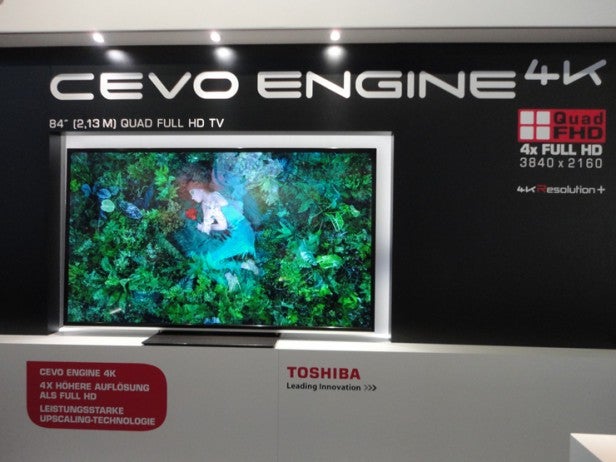 Looking at some of the new TV’s specs, the first good news finds Toshiba adamant that its second-gen 4k models will support 4k playback via HDMI – a facility badly missed on the 55ZL2. This means that when 4k sources start to appear, Toshiba’s new 4K models will be able to play them. Which is nice.

Passive 3D
Also nice is the fact that the new 4k models will not offer glasses-free 3D. Instead they’re going the same passive 3D route supported by LG’s previously discussed 84k 4k screen and Sony KD-84X9005 – a decision which, based on the Sony model, sits very well with us. For it allows you to enjoy genuine full HD 3D pictures without any of the flicker and brightness compromises you get with rival active 3D technology.

Toshiba wasn’t, sadly, running any 3D on its 84in 4k model, but if it’s anywhere near as good as that witnessed on the Sony 84X9005 we’ll be very happy punters indeed.

We guess that if 4k 3D source material starts to appear than the passive approach might suddenly look less satisfactory. But such a day currently seems a long way off.

Actually, 4k sources generally seem a distant prospect right now. So Toshiba is sensibly putting great emphasis on its new CEVO Engine 4K processing system, which applies a bigger chunk of processing power than even the 55ZL2 to upscaling HD and even standard definition sources to the 4K resolution.

Pixel frenzy
Upping image resolution from just over two million pixels to not far shy of eight million is no easy job, yet Toshiba’s 4k 84in TV managed very nicely during a brief hands on with the processing tech, giving pictures a sense of clarity and detail comfortably beyond what you’d see on a normal HD screen. 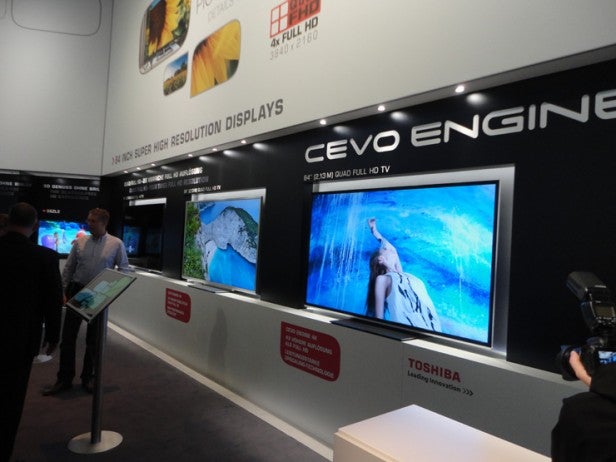 Obviously, though, the screen was at its best when showing 4k. Comprising an extended version of the Toshiba-shot 4k showreel used for in-store 55ZL2 4k demonstrations, we were treated during our demo to a mesmerising combination of gorgeous landscapes, bustling cityscapes and, in time-honoured Japanese tradition, bizarrely dressed ice maidens. And by god, it all looked good. As in, mouthwateringly, jaw-droppingly, impossible-to-live-without good.

Size kind of  matters
As noted with the 55ZL2 and even Panasonic’s pre-production 20in 4k screen (on show at CES as well as here at IFA), 4k doesn’t need a massive screen to make a considerable difference to image quality. But at the same time it’s on something as large as this 84in model where it really makes you fall in love with it, as you get to bathe in the glories of infinitely subtle colour blends, what feels like retina-levels of smoothness and detail, and a sense of depth – even in 2D mode – that transports you effortlessly to whatever location is being shown.

The Toshiba 84in model also looked impressively bright and contrast-rich, with good black level response. It was hard to look closely for any backlight clouding irregularities given the brightness of the showroom floor, but certainly we couldn’t see anything glaringly bad. 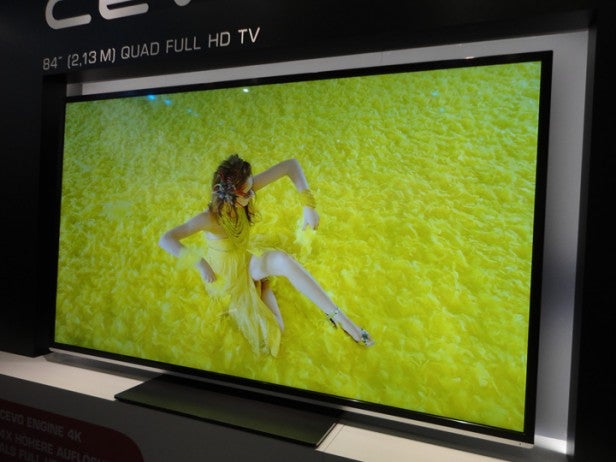 Also enticing was a spectacular demo Toshiba was running of 4k gaming. With a new generation of consoles and PCs on the way, the possibility of enjoying our favourite waste of time in 4k has got us giggling like small children.

For us Sony’s 84X9005 has the edge in image quality terms, mostly thanks to motion on the Toshiba model not looking quite so crisp and contrast not looking quite so extreme. But then Sony’s model is set to retail for north of £20k when it launches in December, whereas Toshiba’s model will likely be considerably cheaper than that.

Price is right?
We don’t know how much cheaper; Toshiba refused to be drawn on pricing. But it did confirm that the new 4k range will sit lower in the pecking order than the 55ZL2, meaning we can expect the new 55in model to be a reasonable chunk of cash cheaper than the 55ZL2’s £7000 asking price.

It’s this potential affordability (relative to its 4k rivals) and range of screen sizes that made Toshiba’s 4K offering at IFA so eye-catching, and is helping to make 2013 look set to be a truly revolutionary year in AV.