No big-name TV brand is as adept at breaking price barriers right now as Toshiba. A fact underlined in bold, red marker pen today by the arrival of the brand’s 32BL702: a 32in LCD TV with LED lighting and multimedia playback support that can be yours for under £300.

This is the sort of price most rival mainstream brands would attach to their 20-24in TVs rather than anything as large as 32in.

We guess the 32BL702’s budget pricing is to some extent visible in its design. Certainly there’s nothing particularly distinctive about its slightly wide black bezel and chunky stand. However, a little grey ‘flourish’ along the bottom edge is a welcome touch, and the set is fairly slim round the back by budget TV standards – a result, no doubt, of its use of edge LED lighting. 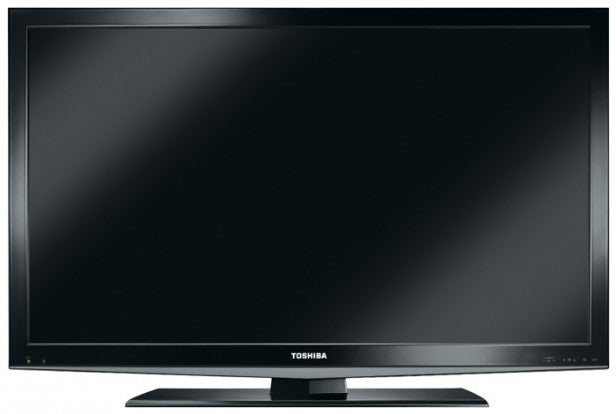 The use of edge LED lighting is potentially significant in performance terms too, since it has the potential to deliver enhanced colour, contrast and running economy versus the simple CCFL lighting often still found in cheap LCD TVs. Regarding the efficiency, the set bags an A grade on the new EnerG rating system, whereas many budget LCD TVs reside firmly in the B, C or even D categories.

Connections
The 32BL702’s connectivity is average. You get two HDMIs when in an ideal world there would be three, and there’s no LAN or Wi-Fi support. As well as immediately showing that the TV doesn’t carry any online or DLNA PC functionality, the lack of any network options alerts us to the fact that the 32BL702 doesn’t have a Freeview HD tuner. Instead you just get a standard definition one. 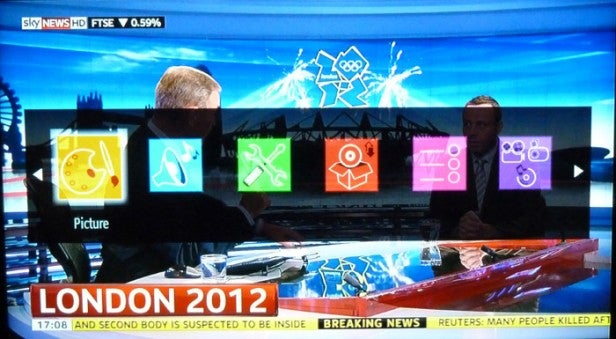 We’re increasingly feeling that HD tuners should be standard issue on TVs of 32in or more these days. But we guess we can just about make an exception when that 32in TV costs under £300.

One ‘bonus’ on the connectivity side is the appearance of a single USB port, through which you can play video, photo and music files from USB storage devices.

Not for walls
Please note, by the way, that most of the 32BL702’s connections stick straight out of the TV’s rear, rather than being accessed from the edge. This makes the set a potentially tricky wall-mounting option. Which is probably why, unlike the majority of TVs we review these days, it ships already mounted onto its desktop stand.

Aside from the features we’ve already covered, the most notable things about the 32BL702 are that it enjoys a full HD resolution, and claims a contrast ratio of 100,000:1 courtesy of a dynamic contrast engine. While common in the LCD TV world at large, such engines can’t be considered a given at the budget end of the TV market.

Features
Within the onscreen menus, meanwhile, you get a series of fairly straightforward but decently useful picture presets, a multi-level noise reduction processing system, the option to boost the black level of sources delivered via the HDMI port, and a simple sliding bar system for adjusting the image’s red and green colour balance. 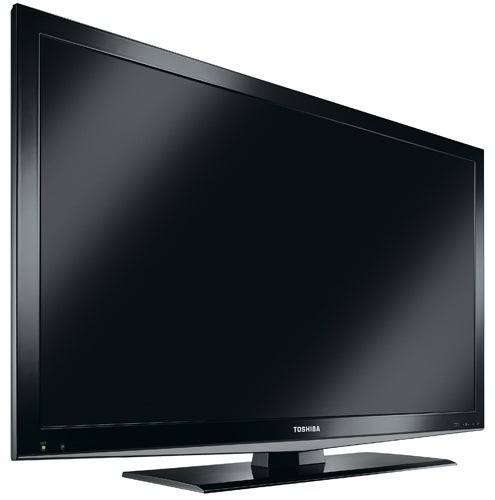 While searching through the 32BL702‘s rather basic onscreen menu system, we got a strong sense of deja vu. And a couple of minutes of investigation revealed why. For the onscreen menus – and the options available – are exactly the same as those sported by some recent Finlux TVs we’ve tested.

This suggests that the panels inside the BL702 TVs are sourced from Turkish brand Vestel (which owns Finlux). And it also throws a slightly less kind light on the previously impressive-looking £298 price point. For Finlux has a 32in edge-LED LCD TV now, the 32F6030-T, that adds USB recording and a Freeview HD tuner to the 32BL702’s spec despite costing just £250.

Intriguing heritage
It’s entirely possible, of course, that the 32BL702 is more than just a rebadged Vestel/Finlux TV. Toshiba could be applying its own processing systems to the core panel. But then to be honest, with the TV only having a 50Hz refresh rate and apparently not boasting Toshiba’s Active Vision processing system, there’s not much scope for the Japanese brand to have introduced much of its own ‘magic’ to the 32BL702.

Having made a Finlux connection, we couldn’t help but feel a bit nervous lest Toshiba’s set suffer the same egregious backlight consistency problems that so ‘undid’ the Finlux 32F6030-T. And sadly, our nervousness quickly proves to be justified, as a severe backlight ‘cloud’ appears across a large expanse of the picture’s bottom right corner. 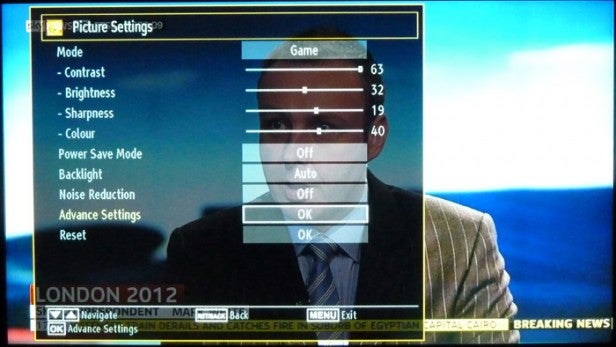 During dark scenes this problem is so obvious it’s truly painful, polluting your viewing with a rough triangle of extra brightness that extends many inches across the picture. Within seconds this cloud becomes pretty much all you find yourself looking at when dark scenes are playing, and tragically there’s precious little you can do about it.

Backlight inconsistencies are by no means rare in the edge LED world. But seldom have we seen any as distracting as the main one on the 32BL702. Except on the aforementioned Finlux TV. In fact, you can even make out a trace of the lighting inconsistency when watching reasonably bright footage, and that’s pretty much unheard of.

Good in other ways
The 32BL702’s backlight problem is made even more annoying, if that were possible, by the screen’s quite credible performance in other ways. For instance, its black level response generally is quite strong by budget TV standards, suffering with much less grey ‘overwash’ than you customarily get with cheap LCD TVs. Ironically the backlight consistency flaws would probably have been less distracting if the screen’s black levels had been less impressive! 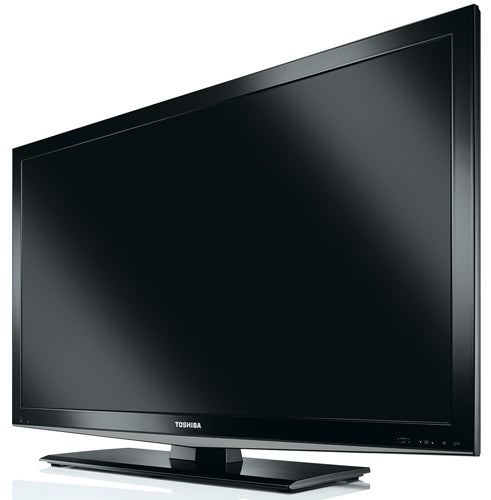 Colours aren’t bad either. They’re bright and dynamic at least, and don’t suffer with excessive video noise problems. Tones are a little basic, leaving video looking rather cartoony at times, and a lack of subtlety when presenting skin tones can leave people looking a touch mannequin-like, especially when watching standard definition. But the fact that colours at least look punchy is achievement enough for the 32BL702’s money.

Motion handling
Motion isn’t badly handled either by the 32BL702 considering it doesn’t appear to have any serious motion processing. There’s a touch of both blur and judder when watching fast-moving motion, but we wouldn’t say it runs beyond what we would expect to see – and can comfortably tolerate – from TVs costing considerably more.

While the 32BL702 is understandably happiest with HD sources, it’s by no means out of its depth with standard definition pictures, upscaling them to the full HD panel without introducing significant amounts of extra noise or leaving them looking soft. Even colour tones hold up quite well, avoiding the tonal ‘slide’ sometimes seen with standard definition on affordable LCD TVs.

Many people might be considering using the 32BL702 as a gaming monitor. And in one way it succeeds quite well in this respect thanks to a respectably low input lag figure of around 35ms. However, that backlight cloud doesn’t half upset your concentration if you’re playing something dark.

The 32BL702’s audio, however, is uninspiring. Even straightforward TV programmes sound compressed with occasional vocal distortions, so you can imagine how unpleasantly harsh, thin and unconvincing a loud action scene sounds.

Verdict
With a fair wind and the right – as in, very bright – footage, the 32BL702 can look quite compelling for its money. But the moment any dark footage comes on, the whole house of cards comes crashing unceremoniously down thanks to a backlight consistency flaw so severe that it really shouldn’t have got through Toshiba’s quality control department.