We wouldn’t normally reconsider a smartphone sat-nav app for a mere software dot release. After all, the first version of TomTom’s iPhone sat-nav system was good, but it didn’t quite blow us away. Nevertheless, the 1.3 update brings something very significant to the iPhone: TomTom’s Live Services. These may not be the only mobile data-powered sat-nav facilities on the market anymore, but they still pack some powerful capabilities.


The 1.3 update is free to existing TomTom for iPhone owners, but the Live Services it supports aren’t. The menu now contains an entry specifically for HD Traffic, which simply presents the various subscription options available. These range in price from a single day’s service for 59p to a whole year for £37.99, with one and three month options in between. This is around half as much as the subscription price for TomTom’s standalone devices.


The iPhone version of HD Traffic uses the same data as TomTom’s standalone Live devices receive, which anyone can preview on the company’s and have a read about in our {linkout:https://www.trustedreviews.com/car-tech/review/2009/06/01/TomTom-HD-Traffic/p1 TomTom HD Traffic review. So it’s not just based on TMC traffic updates, but also uses the mobile phone triangulation system TomTom has developed in partnership with Vodafone. In our experience, this provides the most accurate and dependable jam detection currently available in the UK, although it now has some serious competition in other European countries from Navteq’s competing service, which hasn’t arrived in the UK yet. 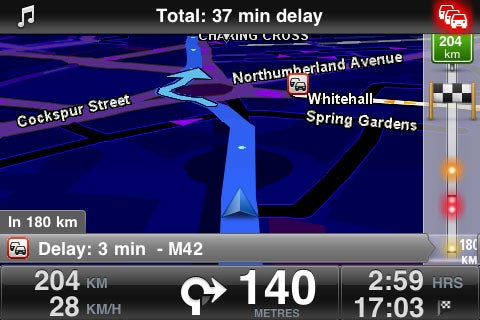 Although the general map interface of TomTom’s iPhone app resembles that of its standalone devices, the traffic updates are implemented a bit differently. By default, your only indication that these are enabled is a little glowing car icon in the top right hand corner of the screen. However, you can touch this to call up a more familiar sidebar illustrating traffic in the next portion of the journey. The formatting is slightly different to the standalone devices, but the information provided is similar, showing the duration of the current jam.


When new incidents that will affect your journey are reported, the app will automatically work out if there’s a quicker route available, then ask if you want to take it via a pop-up at the top of the screen. Annoyingly, you must provide finger input to accept the suggestion, which you shouldn’t really do whilst driving. The TomTom iPhone app doesn’t provide voice operation, unlike the GO x40 and x50 series Live devices. So you can’t use a verbal command to accept or reject the suggestion of a new route.

Although HD Traffic isn’t the only Live Service now available with the iPhone, the subscription price is exclusively for this feature. Since your iPhone will already have its own data plan, the Google Local Search facility is provided for free with the 1.3 update. This has become the near-universal option for mobile data-enabled sat-navs, providing a considerably expanded database of locations beyond the Points of Interest included with the software itself. You can search near your current location, within an alternate city, near your Home location, or any other destination. 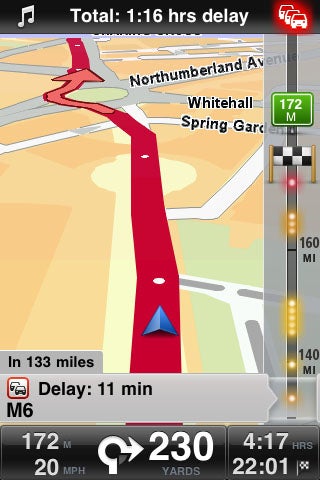 The level of detail for some Local Search entries is greater than other implementations we’ve come across, however. Information includes not just the phone number, but website, opening hours, which payment forms are accepted, a description of the business, and even an email address. All of these details can be copied and pasted into other iPhone applications, or you can call the number, making this a genuinely useful piece of smartphone integration.


Unfortunately, none of the other components of the Live services supplied with TomTom’s standalone devices are included. The live weather won’t be missed, as there are umpteen free iPhone alternatives available. But the dynamic Fuel Prices would have been very useful. In TomTom’s other Live-enabled sat-navs, these add the current cost for your chosen fuel type to the list of nearby petrol stations, so you can navigate to the cheapest pumps close to you. It’s also surprising that TomTom hasn’t implemented its Buddies system on the iPhone, which would surely be an ideal platform for such social sharing of location information. 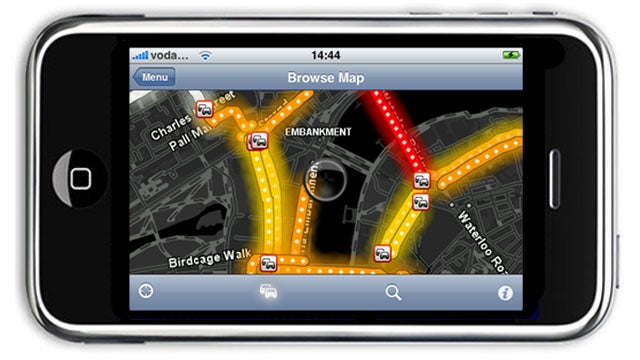 Although the Live Services, in particular HD Traffic, are the big news with the 1.3 update, they aren’t the only enhancements. Pinch to zoom is now supported, so you can use two fingers to home in or out of the map. The display will now automatically switch between day and night mode, based on local sunrise and sunset times, although you can still override this manually if you want. The TomTom app already had built-in buttons for controlling your iPhone’s iPod functionality, but now the music will fade when the software is giving verbal commands, returning to its original volume afterwards. You can allegedly send destinations from other iPhone apps to your TomTom software, too, but we couldn’t get this function to work on ours.


The latest maps have also been included with the 1.3 version, which is worth the app update alone. It’s also worth noting that you can now buy a wide array of maps for the TomTom iPhone app, including the US and Canada; Australia; New Zealand; South Africa; the Middle East; Malaysia and Singapore; even Brazil and Mexico.


The addition of TomTom’s HD Traffic makes the company’s iPhone app the most accomplished smartphone sat-nav software for the regular traveller, and the lower cost of the service compared to TomTom’s standalone Live devices could potentially be attractive too. However, our overall conclusion remains similar to our verdict on the first version: it’s expensive. The CoPilot iPhone app can be had for £26.99, and Navigon’s MobileNavigator is now down to £29.49.


Whilst the TomTom iPhone app works even better with the TomTom cradle, it adds another £100 to the price, making the overall cost more than a standalone device. So TomTom may have the best iPhone sat-nav experience, but it’s looking increasingly pricey, although you can currently get the Western European version for £59.99, which is slightly more competitive.


Link:
Available through the App Store in iTunes