For anyone who has followed Lara’s exploits since the original Tomb Raider made its debut, Underworld is going to be a bit of a rollercoaster ride. We’ve had the initial climb. At the moment, Ms. Croft’s reputation is higher than it’s been at any time since her late 90s heyday. With a few reservations, most of us saw Tomb Raider: Legend as a welcome return to form, while Tomb Raider: Anniversary – though intensely frustrating at times – proved that the team at Crystal Dynamics fully understood what made the series tick, and had what it took to take Lara forward. 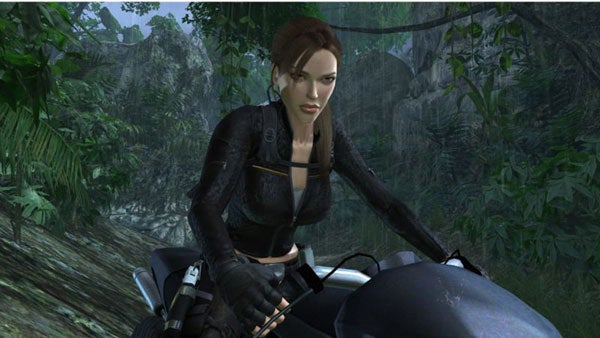 Well, as with any good rollercoaster, the biggest, scariest drop is right at the start. The opening hours of Tomb Raider: Underworld contain stretches that leave you wondering whether Lara’s fortunes really are in capable hands, or whether the game has been rushed out for release. The opening tutorial is clumsy and the following underwater sequence in the Med unexciting. What follows in an undersea temple is solid Tomb Raider fare, but hardly incredible. The levels that come after – particularly a combat heavy section pitting Lara up against a crew of poorly modelled, pitifully stupid henchmen – are downright awful. This hideous thought springs up: they brought Lara back, only to blow it all now.


Then the action moves to Thailand and things perk up considerably. Subsequent levels are among the biggest, best and most ambitious in the series and that old Tomb Raider feeling is back in spades. The game still has its peaks and valleys in the hours that follow, but give it time and this is another fine adventure for our heroine. 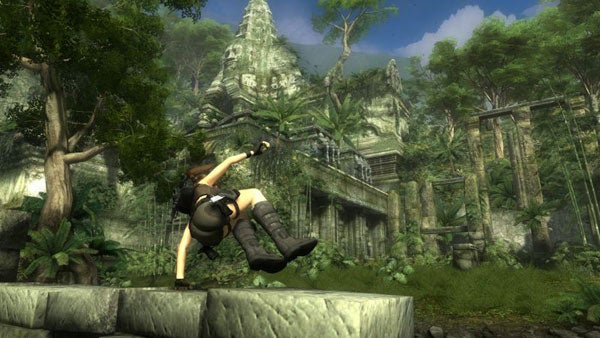 Visually, Underworld is a confident step on from Legend and Anniversary. Crystal Dynamics seems to have abandoned earlier efforts to make Lara look more realistic and gone instead for a style that brings the unfeasibly breasted model of old up to date. Where there has been effort to make Lara more lifelike, it’s all in the details and animation. It’s easy to believe that the team motion-captured an Olympic gymnast for Lara’s movements; every motion looks impressively natural and the animation seems to crib from Naughty Dog’s Uncharted: Drake’s Fortune in that her interaction with the environment, down to little trips and stumbles, seems more real. This is also reflected in small, surface details, like the way Lara’s clothes and skin get covered with grime as she adventures in dirty or muddy places, or get wet when there’s rain or water involved. This isn’t photorealism in the Crysis style, but it is a thoroughly convincing fantasy. 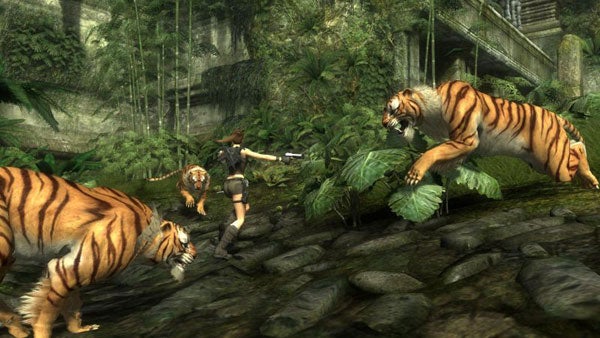 The environments, meanwhile, can be dazzling. We’ll generously sweep past a woefully generic freighter and the interior of Croft Manor, and instead talk about the temples, tombs and ruins in Thailand and Mexico that follow. These are huge, sprawling temples, offering spectacular vistas of crumbling stone and lush, green vegetation, matching the high standards set in this area by Uncharted. At their best, the lighting and weather effects are impressive, and you have to love cinematic touches like startled parrots or the damp walls in ancient, dank crypts. 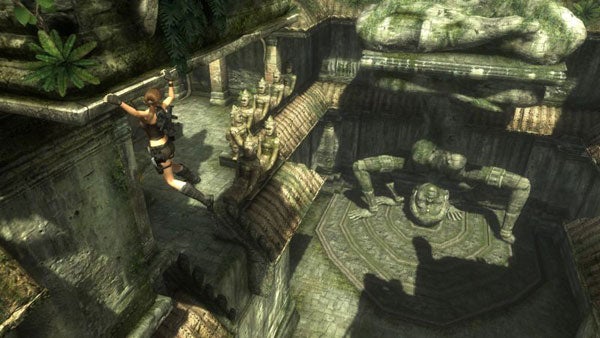 Yet beneath this surface gloss – beneath a modern interface and some genuinely useful in-game help functions – this is an oddly conservative Tomb Raider. It’s built as if Crystal Dynamics had looked at what people loved about Anniversary (the old mix of platforming and puzzle solving) and loathed about Legend (the forced action scenes, boss battles and quick-time event sequences) and decided that it was better to look backwards for inspiration than move forwards. While Legend’s physics-based puzzles make a welcome return, the core gameplay is classic Tomb Raider, played very straight. 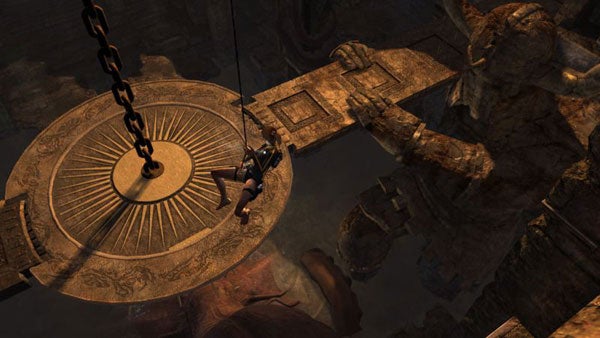 Sure, Lara is now more responsive and controllable. True, the grappling hook from Anniversary is more flexible and useful. Nonetheless, this is very much a game of jumping from surface to surface, swinging from or clambering on poles and dangling from things by the very tips of Lara’s fingers. Lara can now ‘freeclimb’ but this freedom is restricted to clearly designated surfaces, and while there are a few more tricks with poles and beams these are nothing really to write home about. In many ways this is Tomb Raider 1 to 3, but played out on a much larger, more beautiful stage. 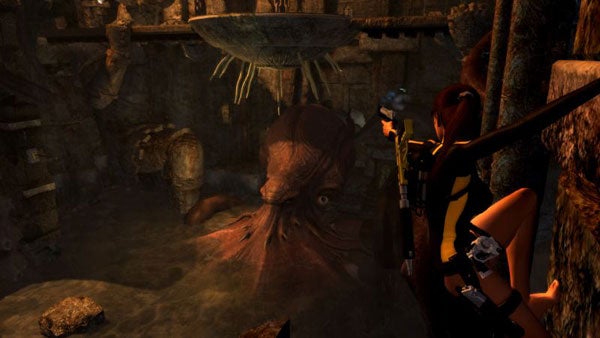 Combat is the game’s weakest point. After Uncharted’s brilliant appropriation of the duck-and-shoot gunplay of Gears of War, there’s something horribly dated about the sight of Lara leaping around trying to avoid gunshots or ducking the attacks of assorted forms of wildlife before blasting them with assault rifle, SMGs or pistols using a primitive lock-on system. The AI is wretched and there’s little real incentive to use a new headshot feature. Arguably Legend actually did this stuff better, and you can’t help feeling that what fighting there is, is merely a distraction from the serious business of getting from A to B and putting objects X and Y on switch slab Z. There’s nothing wrong with that, but why make it so very boring?

In fact, it’s only in later levels that Underworld really seems to be taking strides forward. Towards the end of the Thailand levels there are some great bits involving the manipulation of vast objects, and these set the scene for the Mexican level, which uses Lara’s motorbike as a quick means of navigating a large area containing several related temples, before making it an integral part of the action. The more the game goes on, the more inspired it seems, and while you still get the odd duff stretch, by this point you’re too caught up to really care. 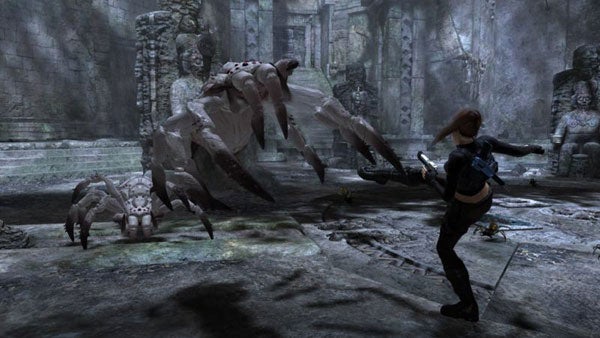 And this is the important point to make: for all that you can’t help wishing that Underworld could push the boundaries a bit further; for all that shooting panthers in the face is getting old-school in the worst sort of way; for all that Uncharted is a superior game on practically every level, there’s still something compelling and oddly magical about Tomb Raider. The plot, which ties in directly with Legend and Anniversary, is mostly guff, yet I still played wanting to know where we were off to next, what we were going to see and how it was going to all pan out. 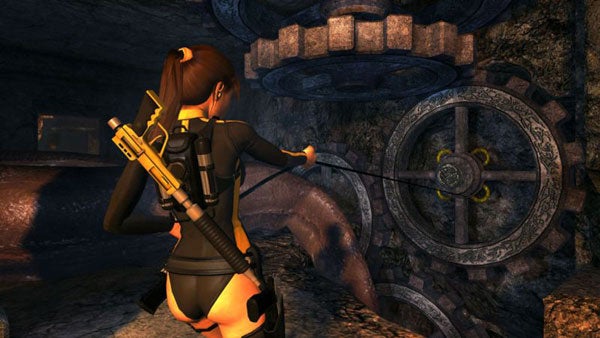 Plus some previous irritants have been neatly ironed out. Checkpointing is much better this time around, minimizing frustration. Quick-time event sequences have been replaced by clever slow-mo sequences which have the same cinematic effect but leave you in complete control. Boss battles have been thrown out with the bathwater. Underworld still has moments where bad camera angles spoil the day, but I spent far less time swearing at it than I did at Anniversary. In fact, the more I played and the further I got, the more I found myself forgetting about its problems and just settling in for the ride. 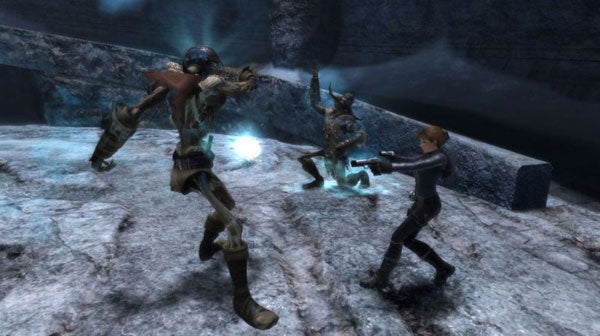 In other words, Underworld will not knock the socks off the type of gamer who’s obsessed with innovation, advanced technology or even coherent game worlds (you still wonder why Lara can climb that wall, but not this one). It will, however, entrance anyone who already has a soft spot for Lara, or for the old-school action/adventure game in general. You’ll be pleased rather than blown away, but in my book being pleased is a whole lot better than a kick in the pants. We might need to see something more extraordinary next time, but for now Underworld leaves Lara where it finds her – in good health.


Not the move on from Legend and Anniversary that we might have hoped for, and some elements are looking dated. Yet Tomb Raider: Underworld’s focus on old-school ‘raiding’ of huge, ambitious ‘tombs’ makes it a must for series fans, and anyone else who fancies a less action-heavy adventure.