It should have started with a bang. You’re ready for the bright lights and the big city, for slot machines and neon glare, for spinning wheels and high-rolling glamour, and instead you’re dumped in a Mexican border town, playing a game that feels like a lifeless imitation of Ghost Recon: Advanced Warfighter. The graphics are patchy, with blazing sunlight and ragged stucco on the outside, boxy architecture and dull, bump-mapped textures on the inside.


Your squad-mates and the terrorists you’re fighting seem to have come straight from Counter-Strike without much of a graphical polish. Worst of all, it all feels a bit same old, same old: surround the door, clear the room, tango down. If you were hoping for a true next-generation take on Rainbow Six, you’d be excused for feeling disappointed. 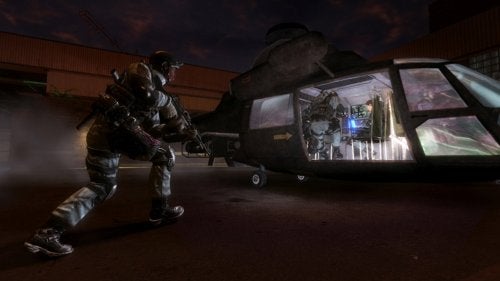 Hang with it. It gets better. Much, much better. Use the time to get used to the controls – to a new slightly simplified squad command system that makes elegant use of the whole 360 controller – and to new game mechanics. There’s a Call of Duty 2/Gears of War style health system that sees your vision blur and darken with successive hits, but recharges if you can find a way to safety. In a move reminiscent of Splinter Cell, there are rope and rappelling options to work with, plus a snake-cam that enables you to scope out what’s going on behind closed doors and even allocate primary targets to your men before they make their entrance.


You can flick between assault and infiltration squad behaviours at the touch of a button, and your men seem far better equipped to take your orders, showing initiative, finding cover and selecting – and firing at – targets with quiet efficiency and real precision. Take a trip into the tunnels beneath a disused train yard, then get caught up in a solo battle to make it to extraction, and you’ll notice that Vegas is starting to pick up. Maybe the latest Rainbow Six isn’t so bad after all…


…and suddenly you’re in sin city, and the game has hit high gear.


The first real Vegas level is a stunner; a run-and-gun battle through the legendary strip, with hordes of masked gunmen in your way, and glass shattering all over the shop. Yes, the placement of cars and trucks to funnel you left and right is a bit contrived, but it also gives you plenty of opportunity to get to grips with the new cover system – find a wall or car to hide behind, press and hold the left trigger, and the view switches to a third-person. You can blind-fire, Gears of War-style, or move the camera to get a better view of the proceedings. 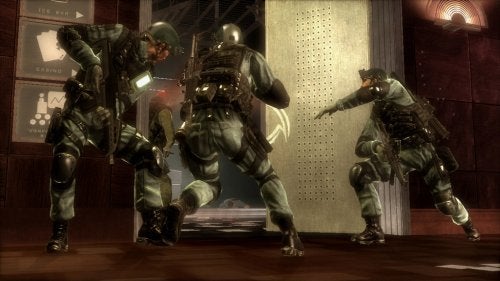 You and your guys scamper forward, taking down ‘tangos’ by the dozen, trying to find a way into a casino where they’ve taken hostages. A burst of SMG fire and one of your men is down, but in Vegas, that no longer means they’re useless. Creep towards them, hit A, and a quick jab puts them back on their feet. Before you know it, you’ve blasted a wall down and you’re in the Calypso – the hottest casino on the Vegas strip.

And suddenly those graphics don’t look so second rate anymore. The screen is awash with blinding light and brash colour – it might be a make-believe casino, but as far as capturing the Vegas style goes, the Calypso is right on the money. Tense shoot-outs in the halls follow, your men moving swiftly between the one-armed bandits, gunmen pouring forth from every door, even dropping down via rope-lines from the floors above. There’s no longer room to be blasé – Vegas wants to make you sweat for every room cleared, every corridor breached. A journey through a central atrium, making your way up the stalled escalators and battered service-stairways is an education in how the vertical plane presents just as many threats as the horizontal, with goons shooting at you from the floors above, while others take position behind cover and try their level best to blast you out. They’re making use of the environment, working together to outflank you. The evil gits are even using smoke-bombs and flash-bombs. Surely this isn’t the cakewalk you expected at the start? 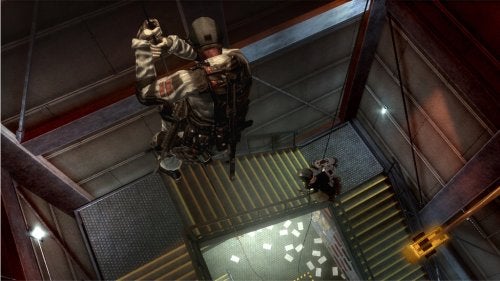 Nope. In fact, there are times when it’s even a little too hard. While checkpoints and the new health system make this a more forgiving Rainbow Six than some past efforts – and it’s certainly a less hardcore tactical shooter than the wilfully sadistic GRAW – there are still plenty of occasions where Vegas throws you through long stretches of such withering gunfire that even staying sharp every single second doesn’t guarantee your survival. For some reason these frequently come directly after in-game cut-scenes (shown in a GRAW-style Picture-in-Picture helmet camera for convenience), meaning that there are some plot-related announcements you’ll have to suffer time-and-time again, though at least you can be blasting terrorists while you do so. As a whole, however, Vegas is a superbly balanced challenge – always tough enough to keep the tension ratcheted sky-high, but not so tough that you feel like throwing down the controller.


In fact, by the time I’ve blasted my way through a high-class Chinese-themed casino and taken the battle out into the neon haze of a stunning reproduction of Fremont St. I’m a little bit in love with the game. What started out as an ugly duckling has transformed into a gaudy gold and scarlet swan. 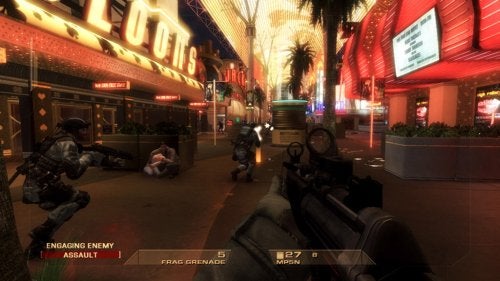 I think that this is the Rainbow Six equivalent of Splinter Cell: Chaos Theory – the game where everything comes together and an always promising series turns a corner. It’s accessible, it’s enjoyable – it bends over backwards to ensure you have fun. You have to dig the environments, which perfectly capture the ludicrous excess of the Vegas casinos while providing fantastic environments in which to engage hostile forces. I love Gears of War to death, but there’s something special about seeing someone sneaking around behind a tasteless rippled glass partition two floors above and putting a bullet through their head, or swinging through a window into a restaurant and taking down three gunmen in a second.

The set-piece battles, fought in huge, multi-levelled arenas, are about as big as they come, frequently leaving you wondering how any terrorist force can muster so many highly-trained troops. Most of all, now that your men have the smarts to follow orders and tackle tangos, there’s the warming pleasure of a good plan coming together. You hit from one doorway, they hit from another, and the room is cleared before your enemies know what’s happened. 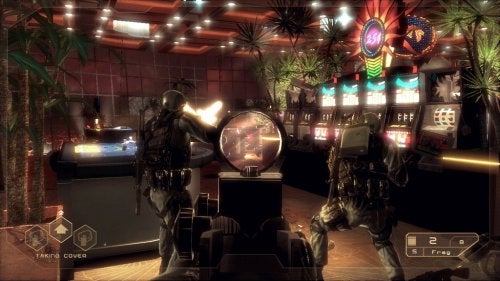 Are there faults? Well, the art team still doesn’t seem to have the hang of doing people, and there are some truly terrible looking hostages and villains, complete with weird angular bodies and poorly-textured faces. And while the multiplayer modes are fun – based on my admittedly fairly limited experience of them – they aren’t quite as stellar as I expected. Some of the maps are slightly bland or even ugly, and while you get a useful range of lone-wolf and team-based options, there doesn’t seem to be anything really that innovative going on.


You certainly won’t be disappointed, particularly if you’re into Counter-Strike style games, but if you’re already obsessed with Gears of War, Call of Duty 3 or even GRAW, I doubt this one will tear you away. On the positive side, however, you can play through the whole single-player campaign cooperatively with up to three players, or take on co-op specific terrorist hunt challenges. There’s certainly enough going on here to keep you busy. 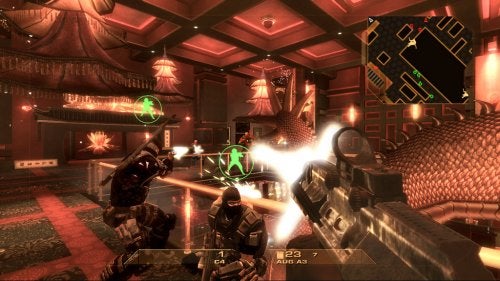 In any case, jot down what Vegas does wrong – the dull first mission, the occasionally dodgy people – against all the many things it does right and it’s clear which way the scales of judgement lie. What’s more, it’s a gun-nuts dream, with so many real-world weapons, all with satisfying noises, and it even has a rip-roaring soundtrack. For my money, this is one of the finest single-player shooters on the Xbox 360 right now, and the ideal title to follow up with if you’ve already worked your way through Gears of War – it’s not quite as gorgeous or as consistently gripping, but its combination of sin city glitz and tactics makes it damn near as good a game overall. Really, what more could you ask for than that?


Don’t be put off by the first hour – Vegas is one of the 360’s finest moments, and a great example of a tactical shooter that’s not just for the usual hardcore audience.