I’ve always fancied some sort of digital fitness monitor, harbouring vague ideas that strapping electronic kit to myself and recording this and that about my physical jerks would help encourage me to get fitter and stay that way longer.


I’ve pretty much always done some sort of running, and have even got fit enough to run a couple of marathons, so when Timex offered me the chance to look at its Bodylink System I decided the offer of a digital training partner was too good to refuse.


It’s up to you how much of the Bodylink System you buy. There are four elements if you want the whole caboodle as reviewed here. There’s a watch which acts as the information hub while you are training, a GPS antenna that you strap to your arm, a heart rate monitor that you wear around your chest and a data recorder that can sit in a pocket. 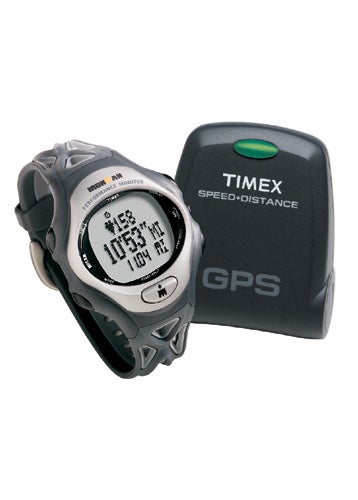 I found the whole bundle on sale in various combinations at UK online retailer www.heartratemonitor.co.uk. At that store, the full kit minus the Data Recorder is named the Timex BodyLink 5E671 and it costs £184.95. Adding in the Data Recorder is an extra £50. You can also buy a bike mount, which might be a good idea if you are keen on using cycling as part of your training regime. I didn’t try this, but at just £7 it’s hardly going to break the bank, considering the overall cost of the rest of the kit.


The first point to note about all this kit is obvious really – with four separate bits to sort out before you start a run, getting out of the front door requires a little extra effort. If your de-motivators include the bother of getting changed for running – or whatever kinds of exercise you do – the Forerunner 301 from Garmin, which Riyad recently reviewed, might be more appealing because of its all-in-one design.


In fact, though, putting the kit together quickly became part of my routine. You strap on the heart rate monitor as part of the process of putting on training gear. The two things that take any real time are getting a GPS fix and setting up the data recorder.

I found that the GPS antenna needed about a minute to get a fix. You can activate it when you start running, but you won’t actually record any data till a fix is achieved, so my solution was to sit the antenna out in the open while lacing my shoes and doing a little stretching. No great time loss there. With a fix achieved, strapping the antenna to my arm with its Velcro band took a couple of seconds.


Next, pressing a button on the watch initiated reception from both the GPS antenna and the heart rate monitor. The final step is pressing a button on the Data Recorder to get it to obtain a signal from the GPS antenna and heart rate monitor. The Data Recorder has just one button and one light, which flashes intermittently if it is receiving from both devices. The recorder is small enough to fit into the pocket of my running lycras – it’s triangular in shape, with each edge about 5cm long. There’s a belt clip and lanyard if you’d rather use these, or if you run with a bumbag, it’ll go there. 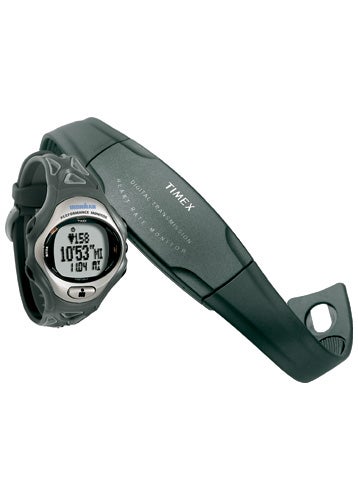 The watch has all kinds of fancy features built into it. It’ll show various combinations of information on its three-line display during training, including current pace, speed, heart rate and distance travelled. It can be set to start recording when you move, and stop when you stop – I found this really useful as it meant time waiting for traffic lights to change was not recorded as ‘run time’ meaning speeds per km were more accurately delivered.


You can manage heart rate zones using presets or user configured ratios. The watch can be set to beep when you go outside your zone and record the amount of time you stay within it. It’ll do lots more too, like working out your average heart rate, taking forced split times every mile or kilometre (whichever you prefer to use), and allowing you to set separate speed and pace limits, again beeping if you go outside them. There are 100 lap timers built in, a three mode countdown timer (useful for speed sessions), and plenty more features besides.

The watch is nice enough to wear for everyday usage – it is a bit chunky but not overly so, and feels comfortable. Features like the count down timer also found a role in daily life as did the five alarms (though actually my own older, everyday watch, an equally chunky Timex Ironman Triathlon model that is no longer available, has more timer flexibility and more alarms). 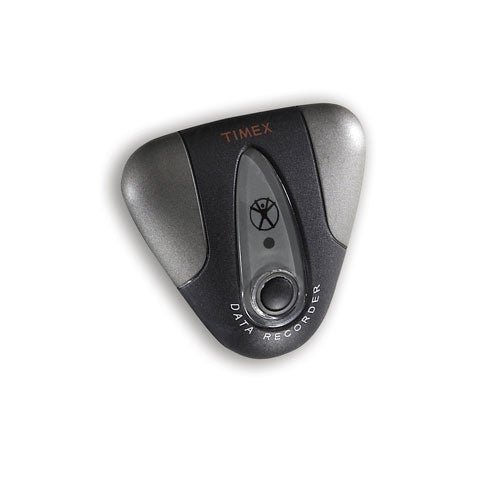 The GPS antenna is a tad large and I measured it at 60mm high x 56mm wide x 25mm deep (depth and width measurements do taper down lower than these maximums but not by much). Despite its size, once it is strapped on and tucked away under a T-shirt I never registered its presence at all. Again there is just one button. Press it and it blinks red until it has acquired a signal, then it goes green. Easy. It maintained its signal well, including under trees up to two layers deep – what I’d call lightly wooded areas.


The heart rate monitor has no buttons at all. It starts transmitting your heart rate as soon as you put it on, and the watch picks up its signal and that from the GPS antenna when you press the appropriate button on it. You can use it for measuring resting heart rate very easily, and indeed probably should do so as part of a training regime. 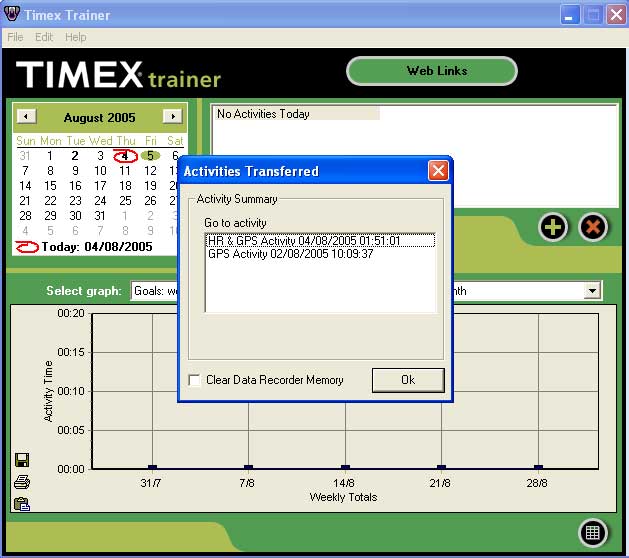 The Data Recorder is bundled with some software for PCs called Timex Trainer to which you download data for long term recording and analysis. You don’t have to do this after each training session as the Data Recorder has enough memory to store several sessions at once. You get a USB cable for the job. It isn’t clear whether this is USB 2.0 or 1.1, but frankly the data chunks are so small that it doesn’t really matter.

Timex Trainer produces a myriad of charts and graphs, and you can edit data it has captured from the Data Recorder, allowing you to fill in any gaps and add in body weight, resting heart rate, activity type and notes for each session. Do all this diligently as well as feeding the software with training goals and over time it could be useful. But the software is by far the weakest link in the whole system, and at the very least it could do with an interface overhaul and much more help for novice users – by which I mean both those new to using IT in this way and those new to striving for fitness. 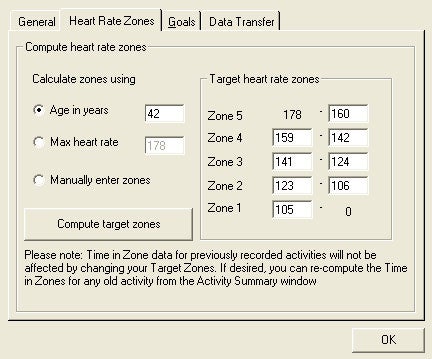 
Overall, though I found the Bodylink System easy to use and very rewarding. It is true that its modular nature means you have to deal with lots of separate bits but I got used to that very quickly, and on a run I was never aware of anything other than the data the watch gave me to look at.


Furthermore, the benefits do outweight the annoyances of setting the kit up before a run. Not only do I now know the length of all the runs I’ve been doing for the past ten years or so, I know where all the kilometre markers are. I’ve always known I do worst in the fourth mile of a six mile race, but I’ve never before been able to measure quite what goes on there. With forced split times and the heart rate monitor, I’m looking forward, in a perverse kind of way, to finding out how much I really do lose it in the fourth mile. Sadly, the Bodylink System can’t magic up the solution to that problem. Only hard work will do that.