At this point in time you’d find it hard to argue against the success of Nintendo’s Wii. Since it launched the Wii has sold by the bucket load, and it’s still hard to get hold of in Europe. Part of that success must certainly be placed at the door of Wii Sports, the bundled title that’s done more than any game to introduce buyers to the Wii experience.


Golf was just one of the sports featured in Wii Sports, and though it was a very simplified take on the sport it was clear that golf did work on the Wii. Naturally, it hasn’t taken long for EA to take notice of this and order the development of Tiger Woods PGA Tour 07 for Wii. 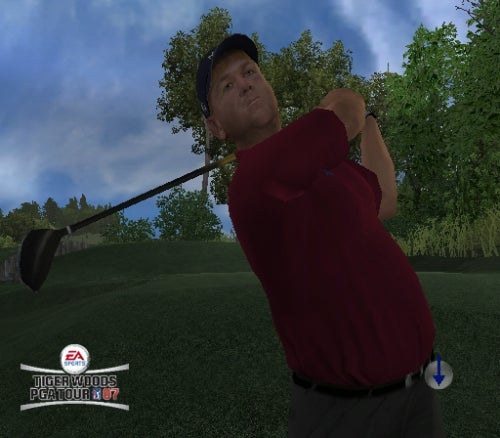 So, how does Tiger fare on the Wii? One thing it already has on its side is that the Tiger Woods series is a very successful one; both critically and at retail. Tiger Woods 07 was no different and the Wii edition, with the exception of online play, features the exhaustive collection of game modes and features found on other versions. Overall, there’s enough in the game to keep you busy for a great deal of time, especially if you dabble in the tour mode.


Of course, what sets this version apart from others is the control system, which makes full use of the Wii Remote. As one might imagine the basic system simply requires you to swing the remote to hit the ball, holding down the B button to indicate your intention to swing. 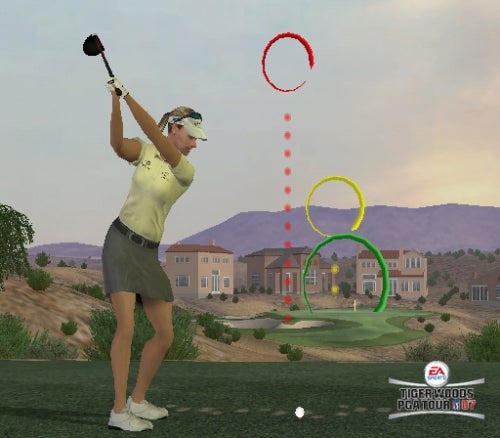 But, it’s not quite this simple. Unlike the golf in Wii Sports, Tiger Woods is a proper golf game and gives you far more options for controlling your shots. You can control the amount of hook or fade on your shots by tilting the remote when you swing, and this adds a more complex dimension to the game. For the most part this works well, it certainly feels natural, but it’s a system that isn’t without its problems.


By its nature swinging a golf club requires you to use your wrists, and when swinging with the remote one naturally tends to flex the wrist. However, doing this will make you tilt the remote and generally result in you hooking the ball. With a little practice this can be avoided, but to hit the ball straight without any right-to-left feels a little unatural. Alternatively, if you find this impossible to control, then you can turn it off by switching to the Easy control mode.

Happily, controlling the power of your strokes is a good deal easier. Power is controlled by the speed and size of your swing, and after a short amount of time it’s easy to get the hang of measuring your shots. Putting is particularly well handled, and is far better than the rather twitchy system found in Wii Sports. Holding down A provides an example of the ideal putt, and there’s a very advanced and confusing grid system showing the gradients of the green. After bit of practice it’s fairly easy to get a good idea of how hard you need to swing to reach the hole, though just like golf it’s never a precise art considering the gradients involved.


The only aspect of the control system that doesn’t quite work, or at least doesn’t feel natural, is the spin system. You put spin on the ball after you’ve taken the shot, selecting the type of spin by pressing the direction on the D-pad and then shaking the remote to generate spin. 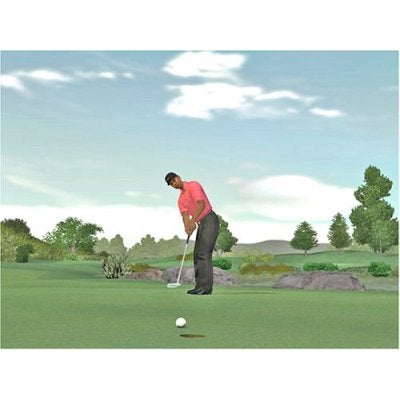 Considering everything else about the control system is fairly intuitive, this spin system just smacks of gimmickry. It doesn’t detract too much from the overall experience, but if there’s one area that could do with more thought then this would be it.


Another area where the Wii version is seriously let down is, shockingly for EA, presentation. Even though the Wii is not about high-definition, it is still, on paper faster than the original GameCube, and that had Resident Evil 4 which was a stunning game at it’s time of release, and still is.


Tiger Woods 07 on Wii isn’t a stunning game, not even remotely. One doesn’t expect advanced effects, but some effort to make the game look serviceable on the console would be appreciated. One can’t get away, not from the lack of graphical quality necessarily, but from the simple dullness of the presentation. Even the most colourful courses appear to be washed in shades of grey, and even the menus don’t look especially polished. 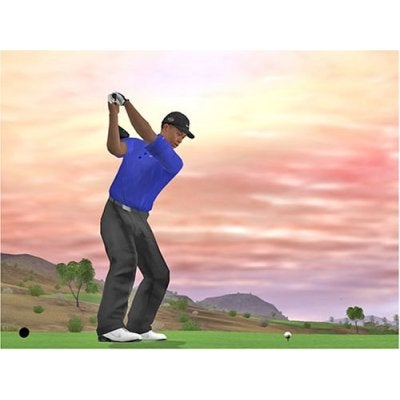 Disappointing though this may be, it doesn’t come as much of a surprise, and EA is by no means the only guilty party in this regard. Until the PS2 finally winds up there’ll still be the odd PS2 to Wii port doing the rounds, though hopefully not for too much longer.


Importantly, though, despite the graphics and presentation not being up to scratch, the gameplay is. The swing system isn’t perfect, but it feels and plays well enough to make an enjoyable game of golf that feels a lot more in-depth than Wii Sports.


As a first attempt, Tiger Woods PGA Tour 07 on Wii is very decent. The control system has its quirks, but it does feel natural and is certainly an improvement over pressing buttons inertly. With this in mind it’s well worth considering, and if some of the issues seen in this version can be remedied then the 2008 edition could be well worth looking out for.