What is the Thrustmaster TMX?

The Thrustmaster TMX is a new, affordable addition to the company’s Force Feedback steering wheel line. Compatible with PCs and the Xbox One, it offers the essentials of a force-feedback wheel but costs less than half the company’s flagship models.

With a full complement of 12 buttons, a D-pad for easy menu navigation, 900-degree rotation and a two-pedal board included, it offers an impressive number of features for less than £170. All of which makes it potentially an ideal choice for those just getting into racing games, or those who play only occasionally.

A force-feedback wheel is a step up from the standard gaming racing wheel in that it doesn’t just turn but it pushes back against you. It simulates the feedback you get in a real car, where you can feel the grip of your tyres going or the back-end of the car sliding round.

All the clever mechanics used to offer such realistic feedback bump up the price, so that even this relatively entry-level model is still a fairly hefty investment. In contrast, non-force-feedback wheels can be picked up for £50 or so.

This particular model is only compatible with PC and Xbox One; Thrustmaster also produces a line for PlayStation/PC models too, such as the Thrustmaster T300 RS. 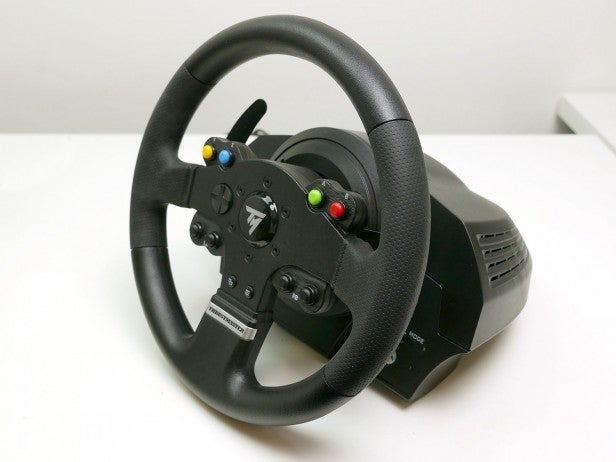 For that £170 you get a well-built piece of kit. The housing feels tough and durable, with thick plastic used throughout. However, I’m slightly concerned by the table-clamp mechanism that features a plastic handle. Although it was fine in testing, I don’t see it lasting for as well as a metal one.

The Thrustmaster TMX clamps to tables up to around 5cm thick, providing a reasonably strong grip. However, attaching to a desk is a little awkward since the wheel is front-heavy; once attached it can still can dip forward slightly, even when done up tightly.

The 11-inch wheel feels tough, even though it’s again made of plastic. It’s mounted securely, with absolutely no wobble or slack apparent. You only get rubber grips on the left and right sections, though. It’s a far cry from the fully leather-bound wheel of the TX Racing Leather. 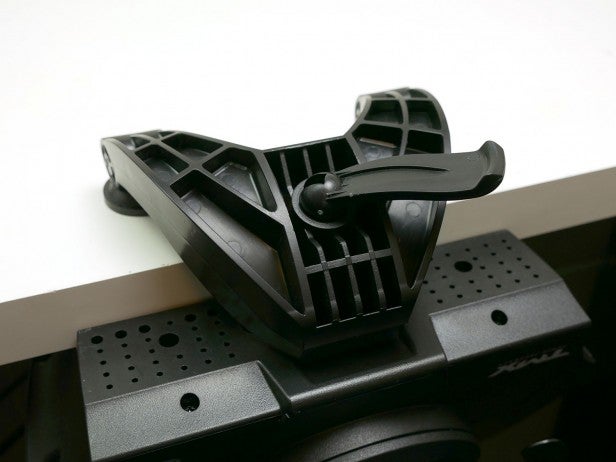 Behind the wheel sit the gear paddles, which are made from thin but impressively stiff steel. They feel nice and strong and have a really defined, audible click to their switches. It is possible to buy an optional gear shift, if you’re not a fan of flappy paddles.

Positioned conveniently around the central portion of the wheel are the various buttons, of which there are 12 in total. They fully emulate the control pad buttons found on an Xbox One controller, including a D-pad, which makes it easy to navigate menus.

The buttons themselves benefit from clear, defined actions, so you’re always quite sure when you’ve hit them; you’re never left in doubt as to what’s happening when in the heat of a race.

As for accompanying pedals, this is where the cost-cutting is a little more immediately obvious. Similar to the rest of the unit, they’re all plastic, and again they’re reasonably sturdy – but they’re also very basic. 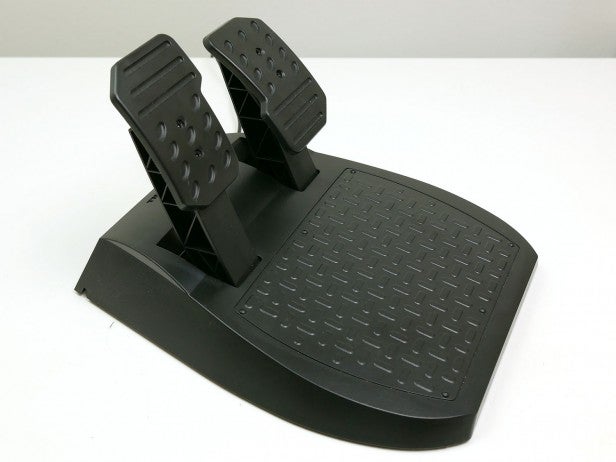 For a start, there are only two pedals included in the box: accelerator and break – and the break pedal doesn’t have a progressive action, where the pedal becomes stiffer the more you push. The base is also small and lightweight, making it all too easy to push around. As such, they offer only a basic way of adding stop and go to the more involved, nuanced experience provided by the wheel.

However, to show what it can do Thrustmaster also sent over its T3PA pedals. These add a clutch pedal, progressive break pedal and have fully adjustable metal pedal plates. What’s more, build quality is far better and the base is larger and heftier, so stays in place far more easily.

Although it is possible to add these better pedals and the gear shift to the TMX, the wheel itself isn’t modular in the way of the more expensive models, so you can’t swap out the wheel or upgrade the force-feedback mechanism. 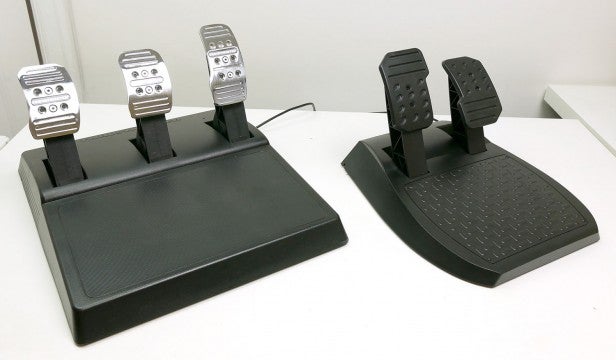 The wheel uses mains power and connects to your PC via USB, while the pedals plug into the back of the wheel. It creates quite a tangle of wires, so can be a bit of a faff to setup for occasional gaming – but such is the nature of all racing wheels.

This mechanism is combined with a 12-bit sensor setup that can differentiate up to 4,096 steps in the wheel’s position. Meanwhile, the pedals use a 10-bit system for 1,024 levels of pressure sensing.

The result is an impressively realistic response, if not quite the level of detail you get from Thrustmaster’s higher-end systems. Rumble over kerbs, get into a tank slapper, or actually take a corner correctly and the wheel provides a very good approximation of the sensation you’d expect. 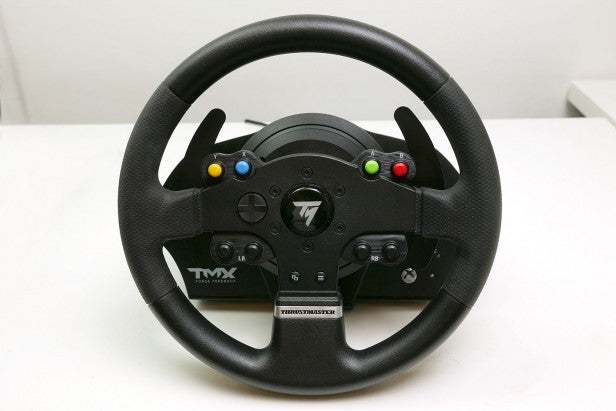 It’s a testament to the effectiveness of the wheel that when playing Project Cars, for example, I was struggling to get the feedback I was expecting with default settings, and regularly came in last. However, diving into the games settings and cranking up the steering sensitivity and force-feedback level from 50 to 100 resulted in the game coming alive. I won the very next race.

The wheel rotates only through 900 degrees, rather than the 1,080 of higher-end models, but this didn’t prove to be a limitation in many of the racing games I played.

However, the pedals are poor. They slide around too easily and feel cramped. As a result, I found I had to left-foot brake in order to keep two feet on it at all times and stop the whole unit sliding around. It isn’t a cheap upgrade to get the £89 T3PA pedals, but I imagine it’s an upgrade many users will make before long.

In terms of compatibility, with the Xbox One it offers a complete plug-and-play experience, while PC users will need to download the driver.

Should you buy the Thrustmaster TMX?

The Thrustmaster TMX is a great entry into the world of force-feedback steering wheels for those who have an Xbox One and/or PC. It provides just the sort of force-feedback experience that brings racing games to life while, largely, cutting the right corners to keep costs low.

The poor pedals let the package down, although they’re enough to get started and are an easy upgrade. However, note that no other parts of the wheel are upgradable – unlike with higher-end Thrustmaster systems.

PC-only users may be better off with the PS4-compatible Thrustmaster T150, which is nearly identical and as a result of having been on the market for a little longer is available for closer to £110.

A good entry into force-feedback wheels for Xbox One and PC gamers on a budget.