Television ‘on-demand’ has hit the headlines recently with both ITV and the BBC announcing a couple of weeks back that they’d be making all of their programs available on a catch-up basis online.


But these aren’t the only developments aimed at changing the way we watch the box. BT, for instance, has just launched its Vision service, combining a Freeview digital TV recorder with on-demand movies and other content over broadband. Channel 4 has been operating a selective download service – 4od – for a while now.

Sky, meanwhile, has its Anytime service, which combines TV you can download and watch on your PC with a jukebox service, which records a selection of TV overnight and stores it to watch anytime you like. HD subscribers get this service for nothing and, very soon, so will owners of recent Sky+ boxes.


Now, Top Up TV, which supplies premium channels via terrestrial digital, is getting in on the act, with a service, coincidentally also called Anytime (I hear the pitter patter of tiny lawyers’ feet), and it’s this that I’m reviewing here.

What you get when you subscribe to the service is a set-top box – you guessed it, it’s called the Top Up TV + box, just like Sky’s – and this allows you to watch and record all the normal Freeview terrestrial digital channels. It has twin tuners, so you can record two programmes at once – and watch another if your telly has a digital tuner – plus a capacious 160GB hard disk inside that’s good for storing more than 120 hours of film and TV.


The box has an impressive 14-day programme guide and you can do all the usual things you can with a Sky+ box: pause, rewind and playback live TV, watch a programme from the beginning while it’s still being recorded, and set it to record whole TV series with a single click – for those programmes that are correctly tagged in the program guide of course.

It’s pretty easy to use too. The interface, perhaps unsurprisingly, is similar to Sky’s in appearance – all blues and whites, but it is a little easier to use. Some features, so sorely missing on Sky, are in evidence – such as the ability to flick through descriptions as well as just the titles of programs on the ‘now and next’ in-screen view. Connections around the back are comprehensive too. There’s no HDMI output, but you do get a pair of SCART sockets, a digital audio output – via a coaxial socket – and S-Video as well. Picture quality is nothing out of the ordinary, but neither is it particularly poor.

What makes this recorder different to your run-of-the-mill digital TV hard disk recorders is that Anytime functionality. Again this works in a similar way to the Sky service. Overnight and into the wee hours of the morning, a selection of programmes determined by the people at Top Up TV is automatically recorded to the set-top box. You don’t get any control over it – and you can’t watch those channels ‘live’ as you can with the Sky service, but the programmes are then stored for you to watch whenever you want. They don’t clash with your own recordings either: Anytime recordings are stored on their own hard disk partition.

All you do when you’re ready to watch is press the Top Up TV button on the Sky-alike remote and browse what’s been recorded. It takes a few days before a decent selection of stuff builds up, but once this happens you’ll have a continually refreshed selection of what is effectively on-demand programming to watch. And you don’t have to worry about the hard disk filling up either. Programmes ‘time out’ after six days, freeing up space for new content, while stuff you haven’t had time to watch can be transferred to the ‘personal’ storage area of the box for watching later.

It’s certainly a good idea, and it works well enough – if what you want to watch is lots of lifestyle TV, cartoons, documentaries and comedy repeats that is – but it’s not perfect. The main issue is with the division of hard disk space, which is heavily weighted towards Anytime content. Select every single channel available, which you’ll need to do if you want a decent selection of content to watch, and the box divides things up on a ratio of roughly 6:1 Anytime to personal storage space, which means you only get around 18 hours of recording space for normal TV to play with. The only way you can change this is to reduce the number of Anytime channels you have set to ‘active’ and, thus, potentially miss out on content that would otherwise have been recorded.


The box itself is bit on the noisy side too, and even in standby the fans make an audible whooshing noise. It’s not something you’d want to have sitting in your bedroom, put it that way. 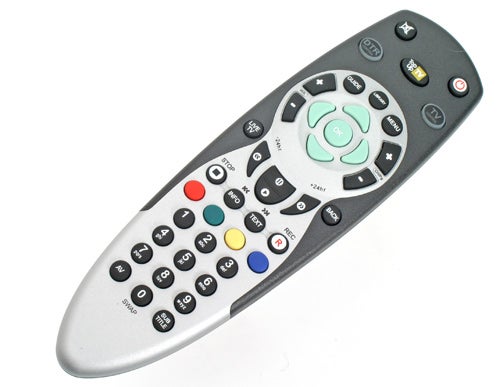 
I think that Top Up TV is going to have its work cut out convincing the TV-watching public to take a serious look at its new product. The main issue isn’t one of impracticality, or any particular hardware failing (though the hard disk issue and noise problems don’t help), but simply that the selection of channels can’t match Sky’s for sheer quantity, range and flexibility. Only those who regularly watch channels like Discovery Lifestyle, Living TV, Hallmark and MTV may be swayed.


Fortunately, the Top Up TV package does have some advantages. At £139.99 for the package it undercuts the price of a Sky+ setup (from scratch) by £20 and has more hard disk capacity for recording. Even if you’re only in the market for a Freeview PVR, a 160GB box like this for £139.99 is pretty reasonable anyway.

At £9.99, the monthly subscription is also cheaper than Sky’s lowest priced package by £5. Next season you’ll be able to watch Premiership football too for a reasonable £10.99 a month and for another fiver you can add a movie channel – PictureBox – into the mix as well.


For these reasons, Top Up TV anytime may be worth a look. It’s well-priced and the hardware is capable – but only if you’re interested in the channel mix.