The Thecus N4200 isn’t like some NAS devices. It doesn’t boast fancy features most users don’t want and will never bother even trying out as its major selling point. Rather, this “Zero-Crash with Dual Power NAS” has a different bent: stability. And that’s a pretty clever pitch, actually. 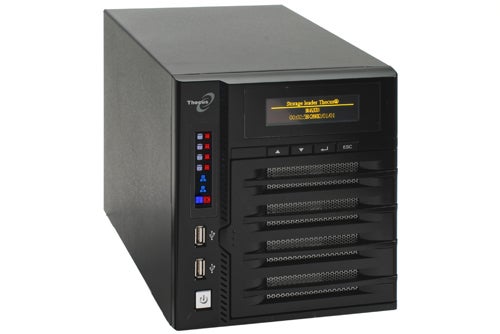 Having recently had my NAS fail on me, I’m well aware of the necessity for stability and reliability in such devices. While it is all well and good espousing the benefits of a network-accessible repository for all of your files, but having faith that it won’t up and kick the bucket, leaving said files worryingly inaccessible, is of prime importance. I, for one, therefore am at least a little interested in a NAS that promises not to fail on me.


There are two main aspects to the inherent stability of the Thecus N4200: ‘Dual DOM’ and ‘Dual Power.’ The use of two DOMs means that should one of them suffer from some manner of error, the NAS will still function with critical system software stored on the secondary DOM – this can then can be coped back across to the primary unit. A quite neat sub-feature of this is the option to enable DOM ‘Auto Repair’ which backs up configuration settings so they won’t be lost in the event of a failure. 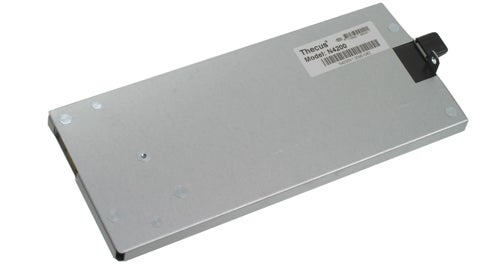 The dual power system comes in the form of a li-ion battery module that can be installed in the rear of the N4200, providing a backup to the mains connector in the event of a power failure. Obviously battery power won’t last indefinitely, but if it’s a choice between losing data or getting an email to say there’s been a mains power failure, in the event that a non-the-wiser cleaner borrows your NAS’ socket for a vacuum cleaner, I know which I’d pick.


If you have access to a more serious UPS, the N4200 can communicate with that via either USB or an RS232 port. The latter inclusion is a step up from the more consumer-orientated NAS devices we’ve looked at recently, and gives this system a better chance of inclusion in a business setup than some of those units.

The dual-core Intel Atom D510 processor nestling within the N4200, paired as it is with 1GB of RAM keeps the system ticking along nicely. Few could argue that Atom-based systems can serve as a replacement for a decent desktop PC, but compared to the average SoC used in most low-end NAS devices, having one in the N4200 makes it a veritable supercomputer by comparison. 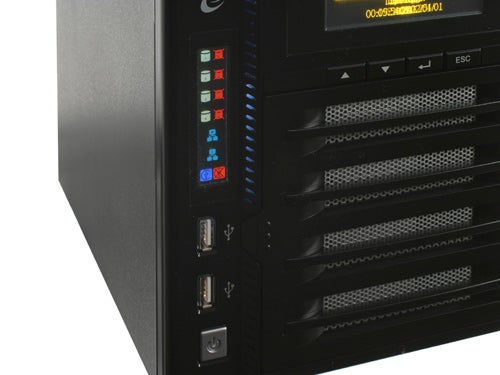 There aren’t enough of us in the TR office to particularly stress a system with clients, but if you need a NAS that can handle a number of your staff accessing it concurrently, then the N4200 should fit the bill nicely. Certainly, it’s a less stressful device to use than my aging ReadyNAS NV which lags should I tax it with, for example, torrenting the latest Ubuntu release.


Connectivity is certainly a strong point for the Thecus N4200. It boasts two eSATA ports, which can be configured either to work separately or alongside the four that can be housed internally – say, as an easily removable backup. Six USB ports, two at the front, four at the rear, provide for the connection of a large array of various devices, from cameras, through printers to USB storage drives. 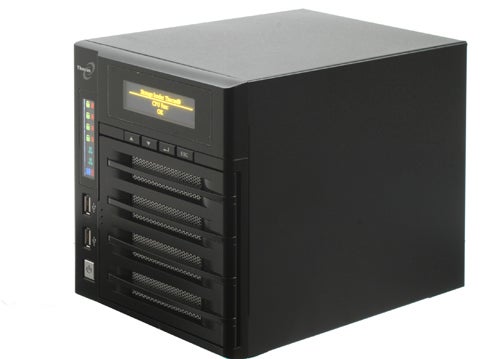 Should such connectivity be desired, the N4200 is compatible with a number of USB Wi-Fi adaptors. There’s even a PCI Express expansion port, and although Thecus doesn’t currently sell any upgrades that use it such additions will no doubt appear in time.


The front of the system is home to two separate displays. A 2.8in OLED panel up top is paired with a set of four buttons, giving basic access to a few useful functions, such as copying data from a USB drive (to a folder called “USB Copy” on the device), checking RAID status, and viewing and changing the system’s IP address. This menu is protected by a four digit passcode, so curious employees or pesky meddling kids can be kept at bay.

Any drives installed into the system can be protected, too. The removable bays can be locked in place and although the locks themselves wouldn’t do much to thwart Neal Caffrey, they should provide a decent mental barrier to less masterly criminals. On the software side 256-bit AES RAID volume encryption should keep data stored on the N4200 safe, even in the event of a disk being pinched. An encryption key, placed on a USB drive, plugged into system, must be present when booting for data to be accessible – in other words do not lose that key! 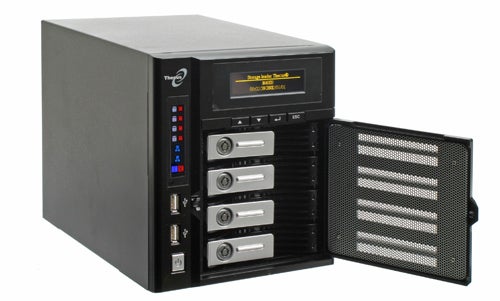 Another useful ability with drives is to allocate one as a hot spare for a RAID array. So if, for example, you add three four drives you can configure three of them in RAID 5, with the fourth automatically replacing any of the others in the event of a failure. Also on the plus side is support for hot-swapping of drives and RAID extension.


Once the storage space within the N4200 is configured, there are several ways to actually use it. Capacity can be allocated either as iSCSI targets, or as simple volumes. All the protocols you’d expect to be present are supported, including Samba, CIFS, AFP, NFS and FTP. The latter has the benefit of offering bandwidth control, which is useful for curtailing particular users that might impede others if left unchecked. Building and rebuilding arrays, checking their integrity if necessary, and formatting drives, is handled with pleasing speed. 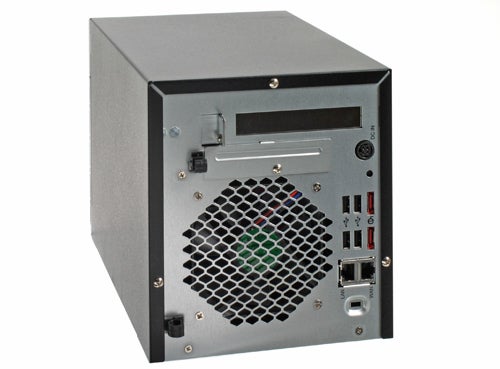 Options are aplenty to help you keep your data safe, with Snapshots, a Recycle Bin and backups to other networked devices (as well as external drives, as previously mentioned) on offer. Thecus bundles backup software with the N4200, which works as expected.


The N4200 sports two Gigabit Ethernet ports, marked LAN and WAN. These can be configured to work separately – making the N4200 accessible to a local network and the Internet via router, for example – or aggregated, 802.3ad (read: bonded), load balanced or failover modes. If you don’t know what those are, or why you’d want to use them, then you probably don’t need to.

The N4200 has a number of features primed to take advantage of an Internet connection, if one is available. Primary among these is a built in Web Disk server, running either via HTTP or Secure HTTP, depending on how worried you are about the outside world trying to pilfer your precious files. Web Disk access mirrors that of local users, and files can be both downloaded from and uploaded to the N4200 remotely. A separate Photo Server takes a slightly more consumer angle, displaying pictures on the NAS – even showing EXIF data should you be so interested. 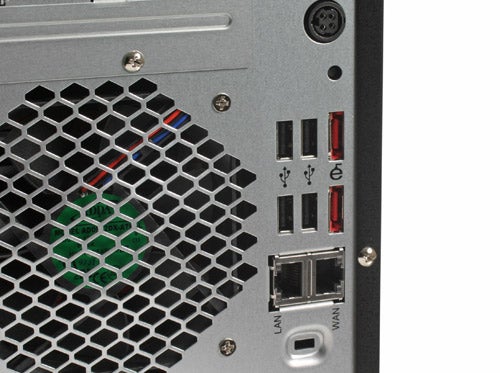 One feature of the N4200 which isn’t realised fully yet is the provision for installing third party modules. Given the large number available on other Thecus NAS devices, it seems reasonable to assume there will be a decent amount available for this one too – plus, you could always create your own if you’re a budding programmer.


Moving toward the consumer side of things are features such as a built-in iTunes server and uPnP media streaming. Both of these work as advertised, distributing files to any system then can receive them – be it a PC, PS3 or an Xbox 360.


Realistically, though, spending over £500 on a consumer NAS is overkill so it’s lucky the N4200’s comprehensive feature set and speedy performance justify the premium. I’m not sure I’m convinced by the menu system offered by the N4200. It is entirely functional and offers a broad array of configuration options, so there are no problems on that front. Compared to the graphically driven menu of an Iomega ix4-200d, however, it’s hardly the most modern or attractive looking offering. 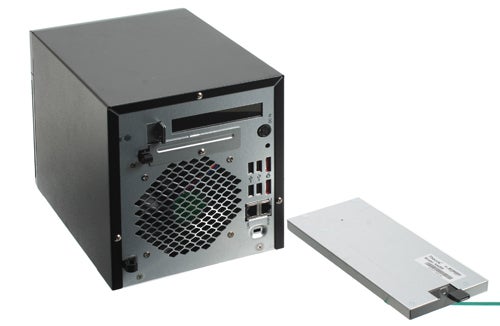 Considering the ix4-200d comes with 2TB of storage for a similar price to a diskless N4200, you’re going to really need the extra features offered by the Thecus to justify its cost. That said, those extra features stack up with the N4200 offering far more options for adding external storage, an extra Gigabit Ethernet port, and a battery backup, not to mention faster components powering it, so it’s hardly without its advantages.


If you can’t afford a dedicated UPS, the backup battery module could well sell the Thecus N4200 all by itself. And if that’s not persuasion enough the nippy performance provided by the dual-core Atom D510 CPU, or the large number of USB and eSATA ports might be..