Thecus has been busy expanding its already extensive range of desktop NAS appliances and its latest N3200 aims to deliver RAID-5 data protection to home users at an affordable price. We were supplied with a review unit by Boston Limited and it went one step beyond by delivering it with three 1TB enterprise-level Hitachi UltraStar SATA hard disks but keeping the asking price just on the right side of four figures. 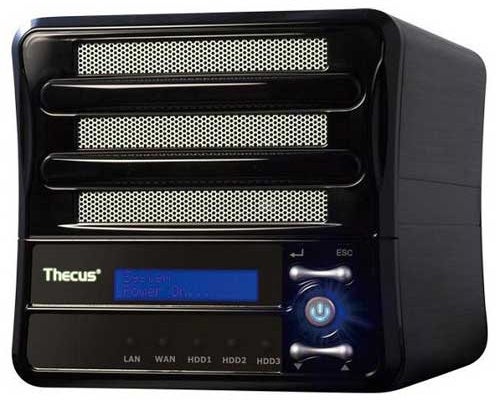 The N3200 is nicely put together with a solid aluminium chassis and a large external power supply with enough juice to handle the larger hard disk models. As with most of Thecus’ appliances the N3200 can be purchased diskless with prices for this around the £300 mark. The drive bays are accessed by slipping the top part of the front cover off where you’ll find three hot-swap carriers behind. The carriers are a bit flimsy as they consist of two guide rails each with tabs that slot into the hard disk screw holes but cannot be fixed in place. Below the bay is Thecus’ standard blue LCD panel which provides a complete status report on the RAID array, both Gigabit Ethernet ports and their IP addresses, the internal temperature and fan speed. Buttons are provided alongside for manually configuring network addresses if required. 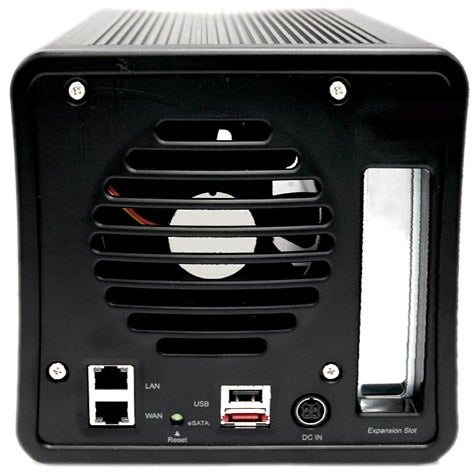 Plenty of connection options are available as you have USB 2.0 ports fore and aft and even an eSATA port at the back. We did notice that on removing the rear cover there is a third USB port hidden away but this is obscured by the cover so can’t be used. An unusual feature is the expansion card slot at the back but this should be completely ignored as although it’s touted as a feature it is not actually supported on this particular model. We discussed this with Thecus and it stated that it will not be used on the N3200 but that it plans to release an N3200M version which will have an AV card fitted with a range of outputs including optical and HDMI.


Installation is helped along with the bundled Setup Wizard which locates the appliance on the network and enables you to set up the Ethernet ports and RAID array. Naturally, we went for a RAID-5 array but you can go for mirrors, stripes or separate JBODs if you wish. Thecus has been sloppy with the user manual as it makes a reference to iSCSI targets but these are most definitely not supported.

The main web interface is common across all of Thecus’ appliances and although it’s not a pretty sight it is simple enough to use. Client support extends to Windows, Linux and Macintosh users and it’ll also function as an FTP server. Share security options start with the local user and group database but the appliance can use NT domain and AD authentication whilst ACLs (access control lists) using local username and password combinations and group memberships can be applied to each folder. However, user quotas are not supported so you can’t limit the space they can consume. 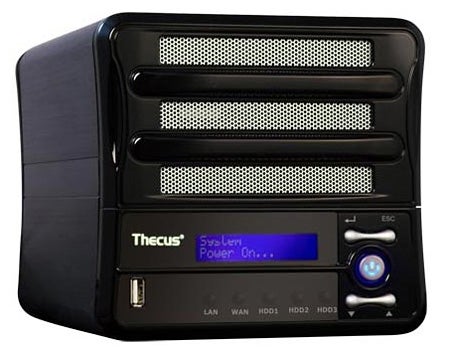 We found performance to be quite good as copying a 690MB video file over Gigabit Ethernet returned average read and write speeds of 21.4MB/sec and 15.3MB/sec. FTP speeds are nothing to sniff at either with the FileZilla utility reporting decent read and write rates of 32.6MB/sec and 17MB/sec. Backup options won’t make the N3200 a favourite for business use as the bundled Thecus Backup utility is very basic. You can create scheduled full and incremental jobs to secure your workstation data to the appliance but its crude interface doesn’t offer anything in the way of reporting. The buttons at the front can also be used to initiate a copy of the contents of a USB storage device inserted in the front port. The data is sent to a default folder on the appliance and automatically shared.


The Download Manager enables you to schedule copies of data from remote locations to the appliance via HTTP, FTP or BitTorrent. We found it easy enough to use although note you can only specify a single file and not a folder. There are plenty of multimedia functions up for grabs as the N3200 can run as an iTunes server whilst the Mediabolic media server offers content to any UPnP compliant player. There’s much more as when a user logs into the appliance they are presented with a simple interface that allows them to access music, videos, photos and files and also the contents of USB and eSATA storage devices. The N3200 can also be wireless enabled simply by plugging in a USB adapter whereupon a new WLAN option will be presented in the administrative interface. The number of supported wireless USB adapters is also now quite lengthy with Thecus’ list extending to over 60 models.


The N3200 delivers a big helping of network storage at a reasonable price although whether home users really need RAID-5 is debatable. Backup options are very limited and you can ignore the extra PCI expansion slot but performance is good and there are plenty of multimedia toys to play with as well.