Thecus has a reputation for delivering innovative NAS appliances with its RouStor N5200 garnering a well-deserved Recommended award for its extensive range of features and storage potential. With the N1200 Thecus has focused on home users looking for a repository for their multimedia content and its claim to fame is being the first desktop appliance to support both 3.5in. and 2.5in hard disks.


There are a number of similarities with the N5200 as the N1200 also uses Thecus’ RouStor technology. Essentially, you get five Ethernet ports with four presented as a switch for LAN users with the fifth set aside as a WAN port. The latter is the Gigabit variety whilst the LAN ports are Fast Ethernet – surely it would have made sense to have these speeds the other way round so LAN users can get the speed benefits? Nevertheless, the appliance can perform routing between the LAN and WAN ports and you can also stop your local users from accessing the WAN port. 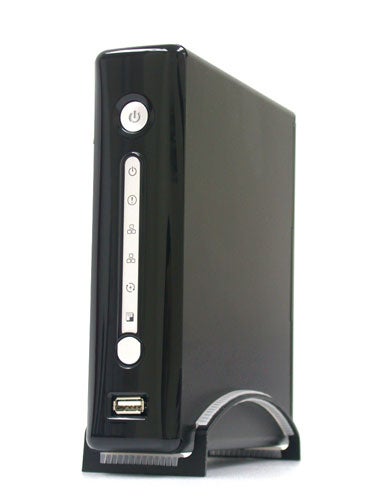 There’s much more to this extremely well constructed box as you get USB 2.0 ports fore and aft with the former linked up to a Backup button that copies the entire contents of the inserted device to a predefined folder on the appliance. The process automatically creates a sub-folder using the appliance’s time and date settings. The rear USB port can be used to attach a printer for sharing over the network and you also get an eSATA port at the back for connecting external hard disks over a high-speed 3Gbps link.


Hard disk installation is simple enough as you remove a couple of small screws on the chassis and slide the top panel back. The drive needs to be fitted on the supplied aluminium tray and slid into place on top of the motherboard so it mates with the surface mounted SATA interface. The tray has three extra screw holes on its base to enable smaller 2.5in drives to be fitted. Appliance installation kicks off by connecting its WAN port to the network and loading the bundled Setup Wizard. This locates it on the network and steps through initializing a new hard disk with Thecus’ Linux based OS, configuring network parameters and securing administrative access. Then it’s over to the appliance’s browser management interface, which is pretty much the same as Thecus’ other NAS appliances but with a new coat of green paint.

The N1200 can handle Windows and Linux users over CIFS, while AFP support gets Mac users in the mix. Each protocol can be activated or deactivated but unlike the N5200 which supports Windows domain and AD authentication you can only control access to shares using the local database. However, for each user and group access can be denied or they can be allowed read only or full write access to specific shares. A range of predefined public folders are provided which can be accessed via a browser to view general files, music, videos and personal photo galleries. For the latter you need to create a folder for each user under which you use sub-directories to store images – photos in the user’s root directory won’t be displayed.


The appliance incorporates an iTunes server for sharing music with other iTunes clients. To use it you just activate the service and copy your music files to the predefined folder. We changed our client preferences to point to the N1200 and could then import CDs directly to this location. There are more streaming services on the menu as you also get Mediabolic’s media server allowing the N1200 to dish up multimedia content to any DLNA (Digital Living Network Alliance) compliant player device. You just need to activate this service and then choose which folders you want published. 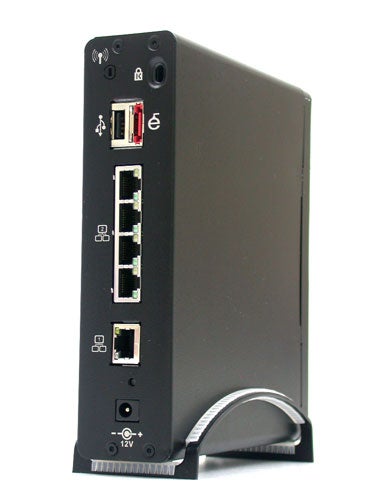 Thecus has also taken a leaf out of Asus’ book as it now offers the same Download Manager feature as the WL-700gE. This supports scheduled HTTP, FTP and BitTorrent downloads to the appliance and can be left running without a PC switched on. Unfortunately, this also proved to be just as flaky as although HTTP download tasks worked fine try and we might we couldn’t get an FTP download task to be accepted as the interface just kept displaying page errors. Note also that you can only create a single daily or weekly schedule, which will apply to all download jobs


Performance will depend on which ports you choose to use. With the appliance connected over its Gigabit WAN port we used a 690MB video file to test read and write speeds and saw the N1200 return 14.4MB/sec and 13MB/sec respectively. FTP performance was also reasonable with read and write speeds of 10.2MB/sec and 5.5MB/sec being reported. However, when we ran the same video file copy across the Fast Ethernet LAN ports speed dropped to 5.5MB/sec for both reads and write operations.


A well built single drive NAS appliance with a fine range of multimedia related features although the Download Manager is of limited value. It would have been nice to have had Gigabit ports all round but at this low price you can’t really argue.

A bunch of predefined media folders are created when the disk is first initialized.

The Download Manager worked fine with HTTP transfers but FTP was a different matter.

The appliance allows you to publish files, music, videos and photos on the web.

The bundled backup utility is nothing special although it works well enough.