IP SANs may be making big inroads into the SMB network storage market but move down to the desktop level and your choices suddenly become severely limited. Thecus has been making the most noise here as it delivered iSCSI support over a year ago with its N5200PRO RouStor appliance which offers an interesting mix of NAS and iSCSI in the same box. Its latest i5500 is a pure IP SAN appliance so there’s no NAS support as its hard disks can only be accessed as iSCSI virtual volumes. 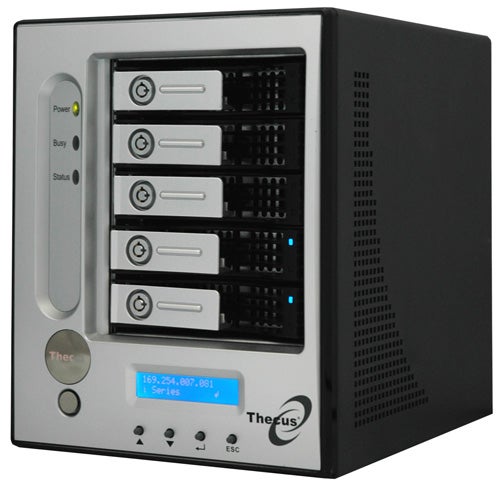 The i5500 uses pretty much the same chassis as the N5200PRO so you get a very well constructed appliance with room for up to five SATA hard disks in removable and lockable carriers. The review system was supplied to us by Ultimate Storage fully kitted out with a quintet of 1TB Seagate SATA drives but you can purchase the system diskless and add your own as required. The system has three network ports at the rear with a Fast Ethernet port for dedicated management access whilst your iSCSI targets are presented over the two Gigabit data ports.


The LCD display panel at the front provides basic information about the appliance status and allows you to change the default IP address of the management port. Installation is simple enough as you can point a browser at the IP address as displayed or use the RAID Finder utility to locate the appliance on the network. Your first job is to set up the data ports which can have static or dynamic addresses although we’d recommend the former as you don’t want these changing unannounced.

The appliance has a fixed iSCSI node name but also has options for using an iSNS (Internet Storage Name Server) as well. Before going any further it’s worth familiarising yourself with the iSCSI implementation used by Thecus as the i5500 only advertises a single iSCSI node name.


When a host initiator logs on it sees one target and under this will appear LUNs (Logical Unit Numbers) for all the virtual volumes it is allowed to see. To control access to each volume you can assign specific initiator names to each one and also use CHAP authentication. If you decide to use this note that only one CHAP account is supported and as this is applied at the node level all hosts must provide the correct user name and secret to access the appliance.

Your next job is to create volume groups (VGs) where you select physical drives and decide on a RAID array for them. Multiple arrays are supported and there are an impressive range of choices with dual drive redundant RAID-6 at the top of the menu. Within each VG you now create multiple user data volumes (UDVs) which will be your iSCSI virtual volumes where each is assigned its own LUN. You can decide on the initial size of each one and it’s worth keeping some spare space set aside within each VG as UDVs can be expanded on the fly. All you do is select their capacity in the UDV list and enter a new value whereupon it will be increased without requiring the appliance to be rebooted.


For access controls you use the Attach menu option where you can allow all hosts to use them by entering a wildcard or add specific initiator names. Usefully, you can determine read and write privileges for each individual initiator. Considering the price we would have expected to see volume snapshots but these are not currently available on the i5500. 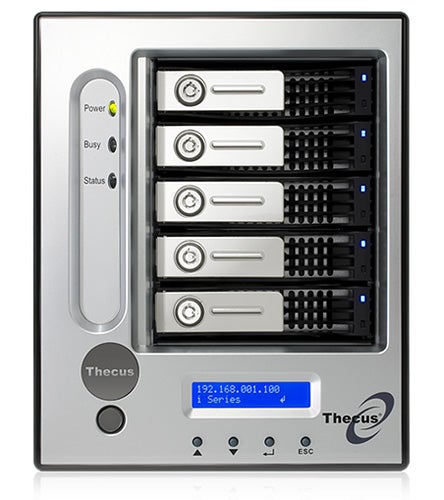 Fault tolerant links to the appliance using MPIO (multi-path I/O) are supported. This allows Windows hosts to see the same disk twice so paths from two network controllers to the same UDV can be created. These are easy to create if you know how but don’t expect any help from Thecus as its manual is almost devoid of instruction for MPIO.


To test the appliance we called up Dell PowerEdge 1950 quad-core Xeon and Boston Supermicro dual-core Xeon servers both loaded with Windows Server 2003 R2 and Microsoft’s iSCSI initiator. After adding the target portal we could see the appliance’s single node as a target and once logged on all available LUNs appeared as new local hard disks ready for action.


The i5500 is certainly a speed demon as with Iometer running on the Dell server we saw it return average raw read rates of 111MB/sec which is close to the best you’re likely to see over a single Gigabit connection. With the second server logged on to its own UDV on the other data port we then saw Iometer return a cumulative read throughput of 196MB/sec. Real world speeds are equally impressive as copying a 2.52GB video clip between server and appliance delivered read and write speeds of 64MB/sec and 60MB/sec respectively.


The only competition to the i5500 comes from Buffalo’s TeraStation Pro II iSCSI and although that four bay appliance costs a lot less than the i5500 we felt it was ultimately flawed. Thecus is a clear winner for presentation, performance and features but if you want iSCSI on the desktop be prepared to pay for the privilege.