Available on Wii U
The Wonderful 101 is mostly wonderful. Platinum Games, the team behind Metal Gear Rising: Revengeance, Vanquish and Bayonetta, has crafted a Wii U title that’s not quite like any other game you’ve ever played: a sort of scrolling super-powered beat ‘em up on a massive scale.

There are echoes here of Pikmin, Revengeance and cult-classic, Viewtiful Joe, not to mention Power Rangers, Japanese Anime and American superhero movies. Yet instead of feeling derivative, The Wonderful 101 is wonderfully distinctive. It’s hard to think of another developer that could have made it, or another console that it might have worked on. 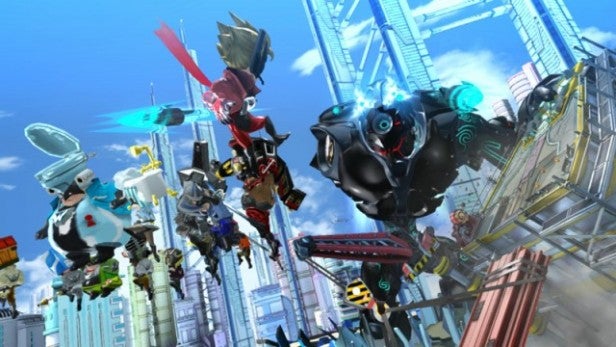 The Wonderful 101: The Story

You start off playing Wonder-Red, by day a mild-mannered teacher, but when evil strikes the leader of a super-powered Earth defence force, The Wonderful 100 (it turns out the wonderful 101st member is you). The Wonderful 100 aren’t like other superhero teams. Where, say, The Avengers are really just a bunch of individuals, The Wonderful 100 take close-knit teamwork to the max.

Using the power of the Unite Morph, they cluster together in shapes, each with its own special power, like the Unite Fist, the Unite Sword or the Unite Hammer. What’s more, by rescuing ordinary citizens they can temporarily recruit them into The Wonderful 100, allowing the team to make bigger and more powerful formations, and really lay the smack down where it’s needed.

It will be. The Wonderful 101 begins with a brutal alien attack on Wonder Red’s hometown, Blossom City, then continues to follow the ongoing battle against the interstellar evil that is GEATHJERK. As trains derail, skyscrapers crumble and giant alien robots attack, it’s up to the Wonderful 100 to send the aliens packing and save the Earth.

The Wonderful 101 is played from a high isometric perspective, which zooms in and out as needed. Each level follows a fairly linear path through the chaos of the alien invasion, as your team tackles killer robots, sci-fi tanks and the occasional boss, hoovering up any bystanders crying ‘save me’ on the way. 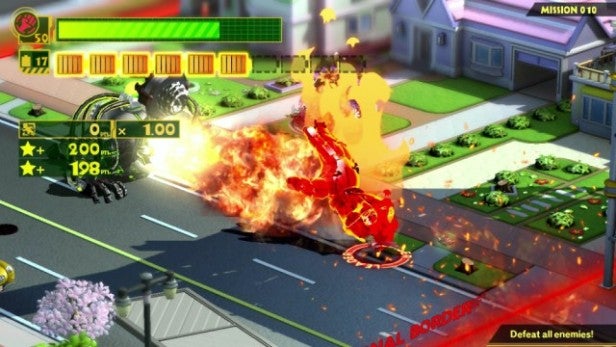 You control whichever member of the team is wielding the current Unite Morph weapon, and switch between them by drawing shapes on the screen, either awkwardly with the aid of the right thumbstick or more naturally with the stylus on the Wii U Pad’s screen. Neither system is perfect. The thumbstick makes it hard to get certain shapes first time, and it’s hard to use the touchscreen while simultaneously hitting the face buttons and shoulder buttons to trigger your various moves. This is one of a handful of areas where the game feels less than slick.

What makes The Wonderful 101 wonderful is that it’s such a dizzying and exuberant spectacle. Watching your growing team just flow around the level, each hero and temporary recruit beautifully detailed and bursting with vitality, is cool enough. Watching them hurl themselves into action against the GEATHJERK enemy, morphing rapidly from sword to fist to gun to whip is even better.

Each level is an exercise in the kind of bombast that even a Michael Bay or Zach Snyder might find excessive, as cities crumble and skyscrapers fall into one another underneath the strain of battle. It’s cartoon in style – and very stylised at that – but the crisp HD visuals and some lovely lighting and effects mean that The Wonderful 101 is one of the most exciting things we’ve seen yet on Wii U. 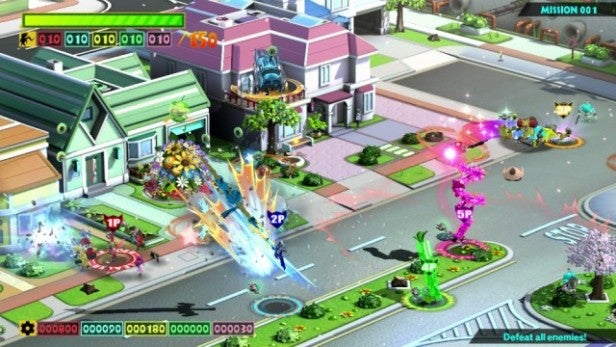 The Wonderful 101: Depth and Long-term Appeal

It’s also deeper than it looks. You can slug your way through the level, pausing only to solve the odd puzzle or use the Unite Chain and Unite Glider shapes to get from place to place, but the combat rewards a more sophisticated approach, as you unlock and then learn how to use the block and dodge moves, and begin to understand when to use each weapon and formation for maximum effect.

Heroes arrive and level-up as you make progress, and you also earn skills which boost your powers and your chances of survival. Play badly in The Wonderful 101 and you’ll die repeatedly, but you can still grimly slog your way through. Play elegantly, and there’s the satisfaction of a high-score and a better ranking: something that will keep hardcore players coming back long after their playthrough is over.

The Wonderful 101: The Negatives

Sadly, some things also make The Wonderful 101 a little less wonderful. At times it can actually be too frenetic, throwing around so many people, so many enemies and so much carnage around on the screen that it’s hard to make head of tail of what’s happening, whom you should focus your attacks on, or when. At its worst, with the camera mucking around for cinematic effect, it’s just bewildering.

There are also several situations – particularly boss battles – where only one solution works and it isn’t obvious which one. You can waste ages trying different but equally ineffective strategies. At times you’d swear that using Unite Glide should work, but the game is hell-bent on you using Unite Chain, or Unite Chain will be the only way forward but you have to find the right spot to deploy it. Some sections where you get an interior view on the Wii U Pad and an exterior view on the TV are quite ingenious in theory, but an absolute nightmare in practice, mostly due to the painful camera angles used. 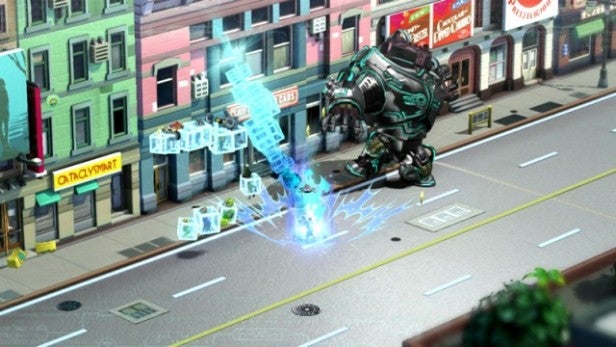 Most of all, The Wonderful 101 is in serious need of better tutorials and lucid onscreen prompts. Those who know and love Platimum Games will know what to expect – interesting game mechanics, inventive gameplay, a steep-ish learning curve – but we can see a lot of people coming to The Wonderful 101, being initially charmed, then becoming more and more frustrated. It’s one of those games where an FAQ might come in very handy.

Yet if you can persevere it’s worth doing so, because games as strange, crazed and brilliant as The Wonderful 101 just don’t come up that often. Watching surfer-dude Samurai Wonder-Blue trade insults with rotund French gourmand, Wonder-Green, is a whole lot more interesting than watching meathead space marines swap swearwords, and if you want dazzling boss battles and manic formation v formation confrontations, then this is the right place. Sometimes it’s going to drive you potty, but at least it never leaves you feeling bored.

The Wonderful 101: The Verdict

The Wonderful 101 will be divisive. For some gamers it’s going to be one of their best games of the year, while others will find it bewildering. But get used to the weird mechanics and work your way past a few rough edges and you have a title that’s bursting with originality and vitality, that’s as exhilarating as it is occasionally frustrating. It’s far short of perfect, yet still wonderful in so many ways.