Available on Xbox 360 (version tested), PS3, PC
When old team-mates reunite for new endeavours there’s always a risk of disappointment. For every Led Zeppelin reunion there’s an Indiana Jones and the Kingdom of the Crystal Skull, and simply getting the old gang together raises expectations while not guaranteeing success. And so The Cave, a game by Ron Gilbert made with Tim Schafer’s Double Fine Productions is sure to meet a muted reception in some quarters. For millions of gamers, The Secret of Monkey Island, its sequel and Day of the Tentacle aren’t just classic games, but touchstones in a shared history. If you go in expecting something on that level, The Cave might feel like a letdown. 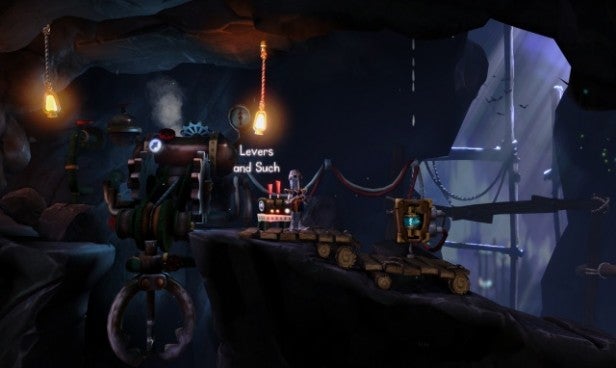 Warning: Contains No Mighty Pirates
Let’s talk about what The Cave is not. It’s not a graphic adventure in the classic sense. It’s not as funny as Monkey Island nor as warped and inventive as Day of the Tentacle or Double Fine’s own Psychonauts. In its own way, however, it’s quite brilliant. It’s smart, witty, cleverly-designed and full of winning personality. Forget Deathspank – this is the best thing Ron Gilbert has done in years.

Some people are calling it a platform/adventure, but the platforming bit is a red herring. Sure, you spend a lot of time running along corridors, climbing ladders and leaping heroically from one ledge to another, but The Cave isn’t a test of skill or timing a la Sonic or Mario, or even a puzzle-platformer in the mould of Deadlight or Braid. To look for an antecedent you’d have to go back to the arcade-adventure games of the eight-bit era; games like Pyjamarama and the classic Magic Knight games on the ZX Spectrum and Commodore 64. 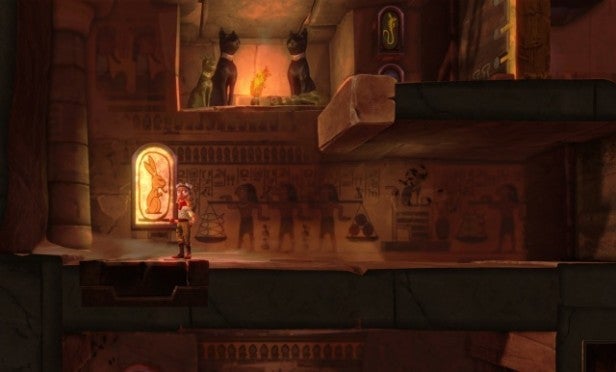 The setup is deceptively simple. Choosing three of seven possible heroes (well, more anti-heroes) you take a trip through the depths of the mysterious titular cave – a place where people come to find their heart’s desire. Each of the seven protagonists has a murky past, and part of the game lies in reconstructing their stories from mystical paintings inscribed on the cave’s walls. The other part consists of solving puzzles; anything from removing a brutal cave beast that blocks your path to ridding a rowboat of a troublesome hermit castaway.

Solving Puzzles
The chambers of the cave are littered with useful objects, and each of your three characters can only carry one at any time. You can also switch between your characters to get around the usual gate, switch and lever puzzles, while their signature abilities come in useful when you need to swing across gaps, survive a fall or make it through a water-logged passage. The trick, then, is working out what to do, with what object, and with whom. 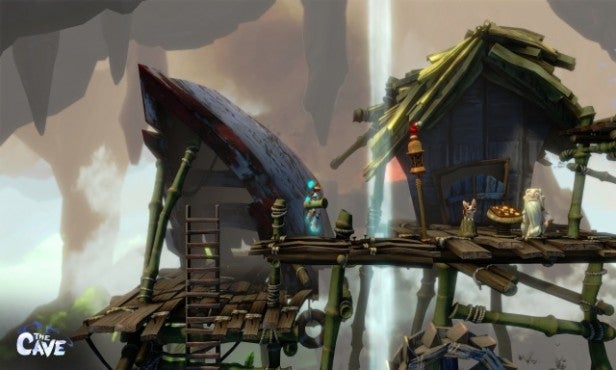 At first, the puzzles seem disappointingly mundane. You don’t buy a Ron Gilbert game looking for footplate and lever puzzles. It’s not long, however, before you’re working with the sort of chains of abstract puzzles that made Monkey Island and Day of the Tentacle so legendary. We’re still not in quite the same league of baroque puzzling, but bones, yowling mutts, hot dogs, parrots, rat poison, tape recorders, electric eels, telekinesis, dynamite and feathers all come into play – though not necessarily at the same time. It might not look like a graphic adventure, but The Cave makes you think like one, even if the puzzles aren’t the most taxing you’ll ever find.

Next
The Cave: The Verdict Review