If you read my recent article “Using Linux at Work”, you’ll know that I now function entirely on Open Source software for my day to day work, and quite frankly, so could most of the population.


However, one of the downsides to alternative, or even free software, is that it is not particularly well advertised, if at all, and hard to find. Unless someone installs it on your machine, or goes out of their way to tell you about it, you wouldn’t know it even existed.


Tesco is the UK’s largest retailer, and fourth in the world. So who better to try and market cheap, alternative software? Tesco has bought a whole range of software to market, in true Tesco style, with simplistic imagery and obvious brand names. 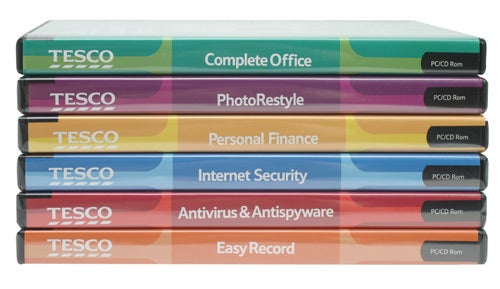 None of the software is made by Tesco, but is just re-branded. However, Tesco has chosen well respected software to re-brand and made the pricing very low.


”’Easy Record”’ is made by Sonic who actually owns Roxio, and creates a lot of studio quality recording and authoring suites. Easy Record is priced at only £9.97 and is really good. It can burn Audio and Data CD/DVDs, burn from an ISO, rip Audio CDs to MP3, and copy media directly. It does pretty much everything you’d need to do, and it’s fast and easy to use. There are a limited number of windows and you can even drag and drop files to it.


”’Internet Security”’ and ”’Antivirus & Antispyware”’ are made by Panda Software, using TruPrevent technologies. Looking around the web, Panda has got a pretty good reputation. Antivirus & Antispyware is priced at £9.97, while the Internet Security package includes this and is priced higher at £19.97. This is only for a year’s subscription, which can be renewed at the end of the year. Direct from Panda, the same software is £26.99 and £42.99 respectively. That’s quite a saving!


”’Personal Finance”’ is made by a company called Reilly Technologies, under the name of MoneyDance. It’s a pretty good personal finance package, with good features and can import data from Microsoft Money or Quicken. At £16.97 direct from Reilly, the £9.97 Teso is offering isn’t such a huge discount, but it’s a saving nonetheless.


”’PhotoRestyle”’ is made by Ability and originally called Photopaint. This usually costs £19.99, but Tesco wants £9.97. Unfortunately for both of them it’s a horrible piece of software to use. Give me The GIMP anyday.


The final, and most important piece of software that Tesco is selling, is ”’Complete Office”’ which I will be concentrating on for this review. This is sold for only £19.97 and is a rebadged version of Ability Office which retails for £49.99. That’s quite a reduction in price, and as we’ll find out – it’s quite a capable suite. 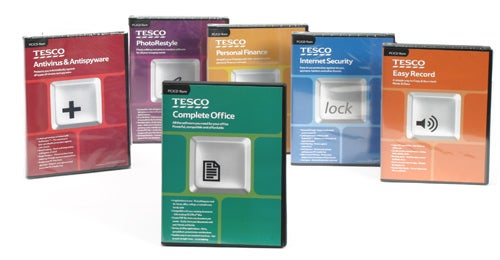 
Testing every function of these office suites is nigh on impossible. But I have tried to test a range of scenarios that are commonly encountered. I focused on the Word and Excel equivalents as these are the most commonly used components.


To test their spreadsheet ability, I used an Excel file from one of my graphics card group tests. This contained quite a lot of numbers, formatting and colours (for my benefit) as well as formulas and graphs.


Both Spreadsheet (Complete Office) and Calc (OpenOffice) opened up my sample Excel file, but things weren’t perfect. Neither supported any of my macros, although both support their own basic system. On top of this, Graphs didn’t look much like the originals at all and Spreadsheet didn’t get my border colours right.


I then went on to the word processors, which in my eyes is the key application and most commonly used. I made a word document that involved a short letter, a photo, a table and a piece of word art. 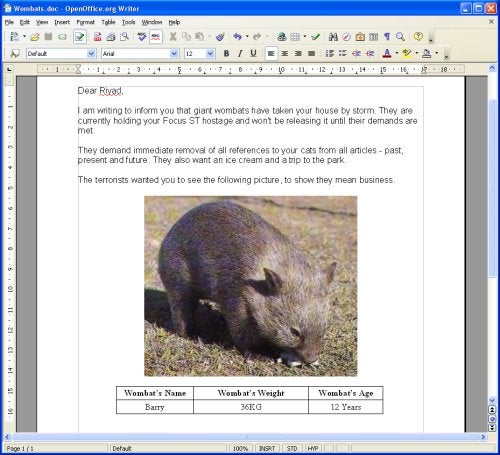 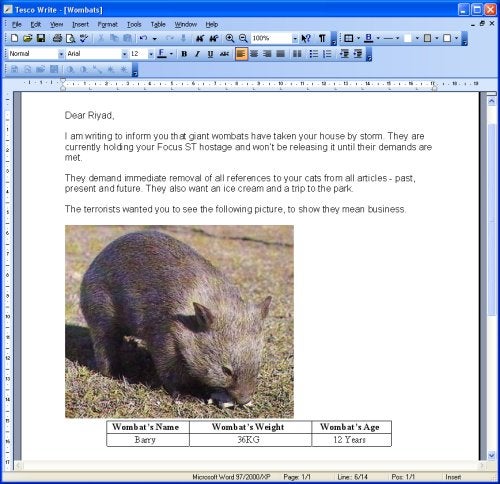 
Both programs opened up my Word document and there was very little difference between them. The image was inserted with an anchor so I could move it around the page. However, Write obviously doesn’t support this feature as it came left justified and couldn’t be moved. The only way I could centre it was to align it as you would text.

One aspect I was expecting both pieces of software to fall over on, was WordArt. Write completely ignored the WordArt, as expected. OpenOffice Writer not only opened it, but displayed it almost identically to Microsoft’s original. 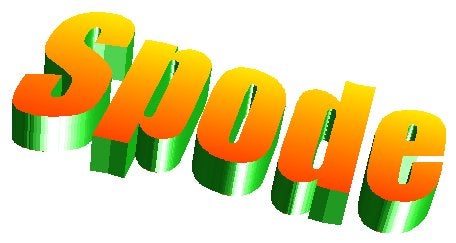 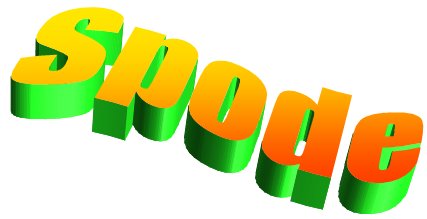 
As you can see, the rendering is very close. Microsoft’s version was anti-aliased so looked a lot less jagged, but I think that’s impressive! 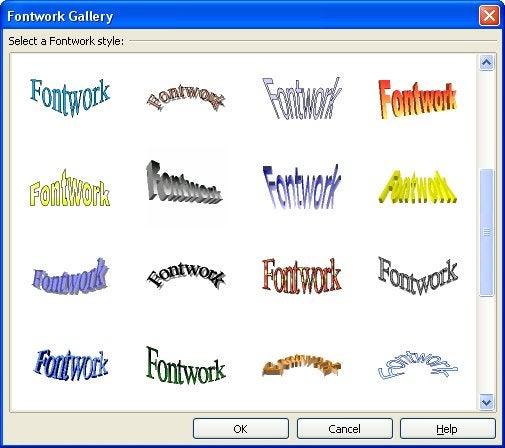 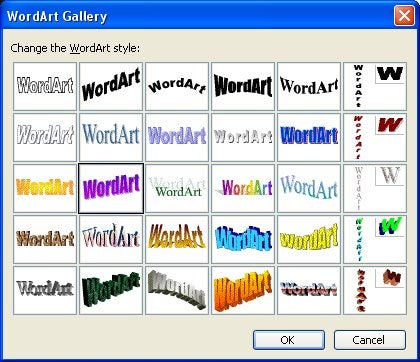 As you can see, FontWorks inside OpenOffice is just as powerful as WordArt and completely compatible.


Aside from the WordArt problem however, Tesco’s Write did a capable job of opening the Word file.

There is no denying that Write is not as powerful as Writer or Word. But what Complete Office has going for it, is that it completely copies the Microsoft layout. The menu’s are almost identical, so anyone going straight over from Word, will struggle to tell the difference. When putting the two side by side, Wil Harris of our sister site Bit-Tech initially guessed the wrong window. 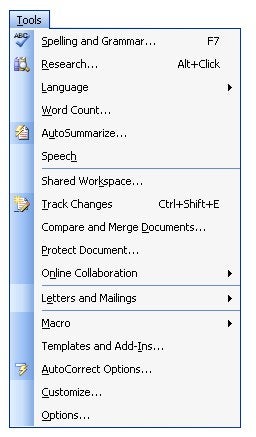 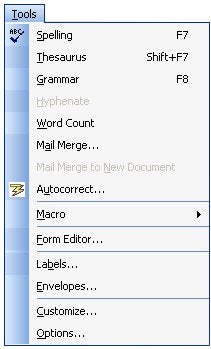 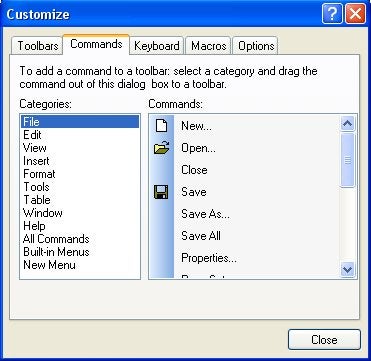 
Even dialogues for customising the software are the same. Right down to dragging the menu items right on to the tool bar!


Out of Complete Office and OpenOffice, my personal choice would be OpenOffice as it is much more powerful and more compatible with Microsoft Office. Not only that, it’s free. However, Complete Office has a lot of plus points.


Complete Office looks so similar to Microsoft equivalents, that you will feel quite at home using it. As long as you’re not using the complex features of Office (that 90 per cent of people don’t) then you’ll be fine. On top this, a single purchase of Complete Office comes with license to install on ”’two”’ machines!


Tesco has done a good job at cherry picking great software that it can offer to the consumer at a cheap price. And for this, the supermarket giant should be commended.