If you’re considering building a Media Centre PC, either based on Windows Media Center or a third party interface, your TV tuner will be an important component. TV is the most popular medium in the home and if you’re going for digital terrestrial TV, popularised as Freeview, it will also include all your radio stations.


To make full use of what Windows MCE can offer, you need two TV tuners, so you can watch one channel, while you’re recording another. Until now, this has meant slotting two PCI-based TV tuner cards into expansion slots inside your PC’s case. This is fine for a PC based on an ATX system board, but may cause problems with Micro ATX or barebones systems, which often have only one available slot. 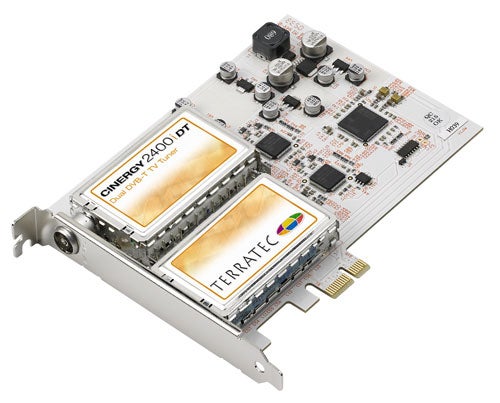 Several companies have been working on cards with twin tuners on board, but Terratec is the first to bring a retail product to market, with the Cinergy 2400i DT. This card can be used with Windows MCE or with the copy of PowerCinema 4, supplied in the box.


The card uses a pair of Thomson DVB-T tuners, which in our view are slightly more sensitive than the Philips devices often seen on tuner cards. This certainly showed when we scanned for channels under PowerCinema. The scan detected all Freeview TV and radio channels currently on offer


The Cinergy 2400i DT is a PCI Express x1 card, fitting the short, 36-contact slot found on some modern system boards. While we can see Terratec’s logic in choosing this format, likely to be the new high-performance internal interconnect, it currently restricts the card’s use in the very area where it should be best suited.


Small form factor (SSF) PCs, epitomised by Shuttle, are where twin tuner cards are most attractive. It’s in these compact cases that space is at a premium and there’s often only one spare expansion slot, other than for a graphics adapter. We did a quick straw pole, to find barebones systems which offer a PCI Xpress x1 slot and found less than ten, and those nearly all Intel-based.


Installation of the Cinergy 2400i DT could hardly be simpler. Install the support software from the supplied CD and plug in the card. There’s only one socket on the back panel, for a TV aerial, so there’s no scope for confusion. The signal is split on the card, to feed both tuners.

If you’re using Windows MCE, you rely on the operating system to act as a software front-end for the card, but it also works with PowerCinema 4. This Cyberlink application looks and feels very similar to Windows MCE, so much so we’re surprised Microsoft’s legal magma chamber hasn’t started to spew its wrath at its authors.


Both interfaces use the same type of gently scrolling menus on large text screens – easily readable on a TV, as well as a monitor. Both have pages which pop onto and collapse away from their screens in a similar way and both use blue backdrops with watermarked graphics and orange and green button highlights. 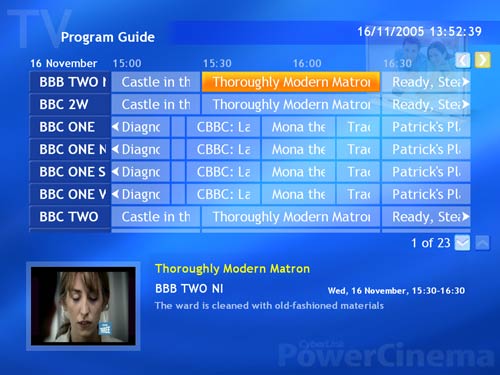 Once you’ve scanned the TV frequencies for TV and radio channels, you can sort them my number or category, or go through them manually to set up just the order you want. Channels can be displayed full screen or in a window and you can inset one picture within another – a second advantage of having twin tuners.


When you come to use the Electronic Programme Guide (EPG), you see the main advantage of the card, though, as you can set up a recording schedule by clicking on any programme in the guide and choose to record it once, daily or weekly. The recording, straight to hard drive, will happen no matter what you’re viewing at the time. 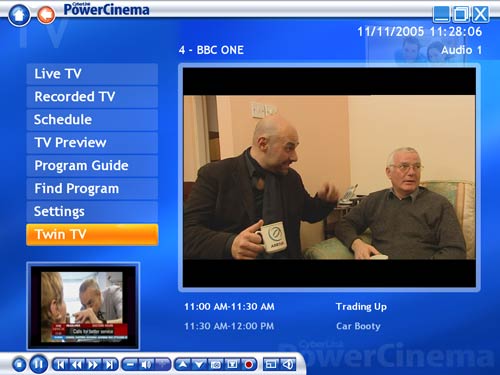 Picture quality from the Cinergy 2400i DT is good, with natural colours and little in the way of artefacts. The picture you see will depend on the TV signal strength in your area, or course, but it’s easily up to the standard of a typical domestic Freeview box. The picture automatically flips between 4:3 and 16:9 widescreen modes, taking up full screen width and adjusting height to maintain aspect ratio.


To an extent, TV tuner cards either work or they don’t. This one certainly does and produces quality pictures from both its tuners. As long as you have plenty of space on your hard drive, the PVR functions built into either Windows MCE or PowerCinema enable you to record your favourite programs, whether scheduled or live and independent of what you’re watching. No other card we’re aware of on retail sale in the UK can do this. It makes the Cinergy 2400i DT novel for the moment, but even when rival products come along, the quality of hardware design and efficacy of the Cyberlink software may well keep its nose in front.