Soaring to the top of App stores across various platforms, the original Temple Run app has already clocked over 170 million downloads, becoming one of the most successful independent games apps on smart devices.

Now, the much-anticipated sequel from Imangi Studios, Temple Run 2, is here and looks set to outdo its predecessor fairly rapidly, having reached a staggering 50 million downloads during its opening 13 days on sale.

The freemium app builds on the strong foundations of its predecessor, but has Temple Run 2 included enough new additional features to warrant its continued popularity? 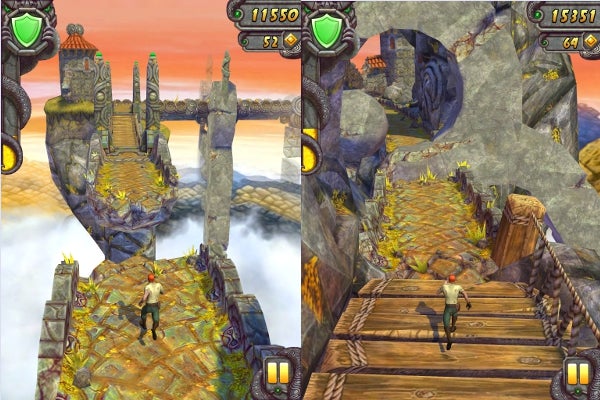 The most noticeable upgrade in Temple Run 2 is the vastly improved graphics. Vibrant colours and much more detailed environments add to the appeal of the lost city in the sky setting.

Built using the Unity development engine, the Temple Run 2 landscape has been improved throughout, with curved roads and hills replacing the more angular terrain of the original game. Waterfalls and other scenic additions also appear periodically, adding a more realistic feel to the often-monotonous setting of the original.

The game world has also been upgraded to include new zipwire and mine cart sections. Players will periodically have to slide down rope ziplines or hop into minecarts and navigate a web of mining tracks deep within the caves.

Although some users have found that the new upgraded graphics have come at a performance cost, with any incoming texts, emails or notifications causing the game to lag, Imangi has been quick to issue a patch. That said, such delays have cost the lives of many a plucky adventurer in our experience.

Temple Run 2 benefits from retaining the original game’s control mechanics. Players must utilise a tried and tested swipe control system. Swiping left and right to make turns, users have to swipe up and down to avoid various hazards along the route, including fire-breathing statues and precariously placed rocky outcrops. Tilting the device controls the mine carts as well as letting users pick up power-ups and the coins and gems that make up the currency for Temple Run 2. 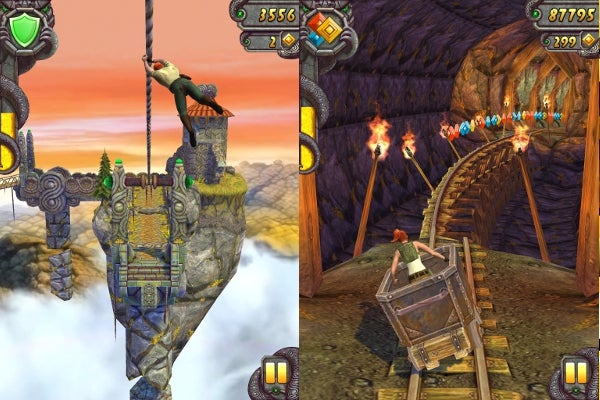 Coins are used throughout Temple Run 2, allowing you to unlock characters and upgrade their various abilities. At the start there are four characters to chose from, and unlike the original Temple Run, these are not distinguished by purely cosmetic reasons, but also by the upgrades they offer.

Gems on the other hand are used to buy a “restart” when a player’s character unfortunately meets its end. Players can continue from where they made their error by spending gems, instead of having to return to the start of the game.

This seems to diminish the competitive aspect that was so alluring in the original game. In Temple Run 2, high scores can be achieved through spending real money on a steady supply or gems, rather than perseverance and dedication to developing a skill at the game. Something even Wayne Rooney was seen tweeting about when playing Temple Run. 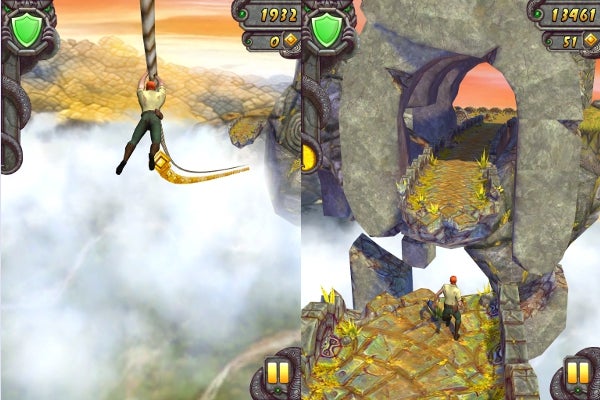 Upgraded graphics and a more varied game landscape, coupled with the original game’s accessible control template, make Temple Run 2 a pleasure to play. For fans of Temple Run 2’s predecessor, and players new to the series, this sequel is sure to delight, still managing to fend off bouts of boredom with its pick-up-and-play convenience.

However, we would have liked to see the game veer away from encouraging people to buy their way to high scores, instead keeping the competitive milestones set by the original.